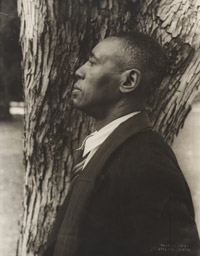 Horace Pippin was born in West Chester, Pennsylvania, on February 22, 1888, to Horace and Harriet Johnson Pippin; his grandparents had been slaves. When he was two years old, his family moved to Goshen, New York. Pippin began to draw at an early age and in 1898 won a box of crayons in a contest sponsored by an art supplier. The following year the family moved to Middletown, New York, where Pippin’s mother took a position as a domestic. After completing the eighth grade in 1902, he moved to New Jersey and eventually found steady work as a hotel porter, a storage company mover, and an iron molder. In 1917 Pippin enlisted in the 15th regiment of the New York National Guard (later known as the Army’s 369th infantry regiment), an all-black unit that saw active duty in France. A sniper shot Pippin in the right shoulder, permanently disabling his arm. Shortly after his return to the United States in January 1919, he received an honorable discharge and a disability pension. In 1920 he married a laundress named Jennie Ora Fetherstone Wade Giles, and moved to her home in West Chester, Pennsylvania.

Unable to perform manual labor, Pippin worked at odd jobs to supplement his pension and began to paint cigar boxes. In 1925 he began to experiment with pyrography, burning imagery into wood panels with a heated metallic point. He executed his first oil painting in 1928, and over the next decade produced one to four paintings a year. Pippin attracted the attention of N. C. Wyeth and Christian Brinton, who arranged for him to have his first solo exhibition at the West Chester Community Center in 1937. He attracted national attention in 1938 when four of his paintings were included in the traveling exhibition Masters of Popular Painting organized by the Museum of Modern Art. Late in 1939 he met Robert Carlen, owner of Robert Carlen Galleries in Philadelphia, who became his dealer. Carlen introduced Pippin to the noted collector , who bought a number of his paintings. After a very successful exhibition at the Carlen Galleries in 1940, Pippin began to produce about 15 paintings a year. For the next six years his work was widely exhibited throughout the country, and acquired by important museums and collectors. Pippin died of a stroke on July 6, 1946.

Pippin’s rise to fame directly paralleled the folk art revival of the 1930s. Entirely self-taught, he painted in a nonacademic, linear style that was characterized by a powerful sense of design and expressive use of color. His works are decorative and highly stylized. He painted a wide range of subjects, from African American genre scenes, portraits, and biblical scenes, to politically charged historical paintings such as John Brown Going to His Hanging (1942, Pennsylvania Academy of the Fine Arts) and allegories such as Prejudice (1943, Philadelphia Museum of Art). Pippin drew his imagery from such diverse sources as films, prints, and paintings by and , as well as from his own experiences. His modern folk art style defies classification.

2015
Bernier, Celeste-Marie. Suffering and Sunset: World War I in the Art and Life of Horace Pippin. Philadelphia, 2015.