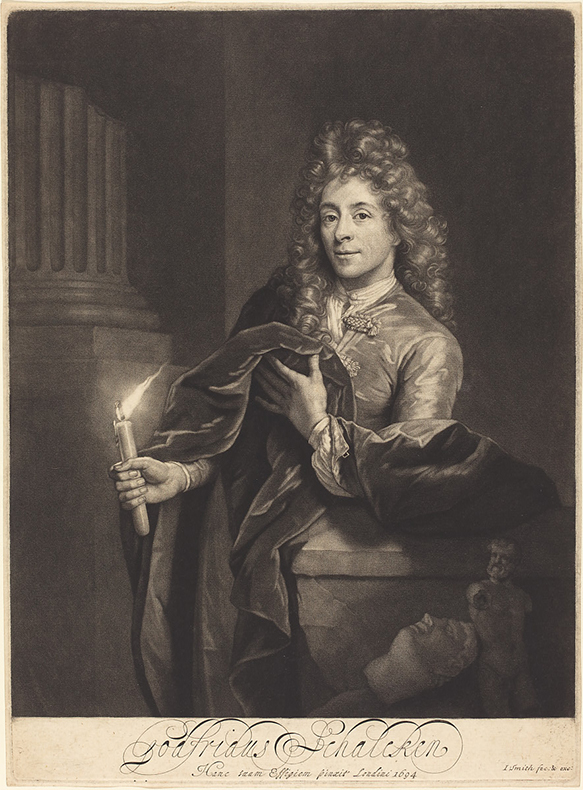 Godefridus Schalcken was born in Made, a town south of Dordrecht, where his father, Cornelis Schalcken, was a minister. Schalcken’s father and his mother, Aletta Lydius, moved their family to Dordrecht in 1654 when Cornelis was appointed principal of the Latin school.[1] Between 1656 and 1662 Schalcken was apprenticed to the artist and theorist . After Hoogstraten left Dordrecht for England in 1662, Schalcken studied in Leiden with , probably for a year or two. Schalcken most likely returned to Dordrecht by the mid-1660s.[2] In 1679 Schalcken married Françoise van Diemen (b. 1609) from Breda. They had seven children, but only one, Françoise, is known to have survived into adulthood.

Schalcken’s biographer, Arnold Houbraken, who probably knew the artist personally, admiringly described him as one of the few who made a good living from his painting.[3] In 1691 Schalcken paid dues amounting to eighteen guilders to The Hague painters’ guild, Pictura, which gave him the right to sell his work in the city without actually living there.[4] In 1692, however, Schalcken and his wife left the Netherlands for England.[5] According to Houbraken, the English had lured Schalcken to their country, where he was able to earn his fortune.[6] The couple resided at Windsor, at the court of William III, where Schalcken painted the king’s portrait as well as the portraits of other English aristocrats. By 1699 Schalcken had returned to the Netherlands and settled in The Hague. Except for a period of work in Düsseldorf (1701) at the court of Johann Wilhelm, the Elector Palatine, he remained in The Hague for the rest of his life. He died November 13, 1706, at the age of sixty-three.

[2] Matthys van Balen, Beschryvinge der stad Dordrecht… (Dordrecht, 1677), 688. In his extensive article on Schalcken, G. H. Veth, probably by mistake, writes that Schalcken was back in Dordrecht by 1665 because in that year he was was the standard bearer for the 7th Company Dordrecht Civic Guard (G. H. Veth, “Aanteekeningen omtrent eenige Dordrechtse schilders,” Oud-Holland 10 [1892]: 2, note 5). However, Van Balen dates Schalcken’s role as standard bearer to 1675. It is, nevertheless, probable that Schalcken returned to Dordrecht by the mid-1660s (information kindly provided by Guido Jansen).

[4] Abraham Bredius, “De Boeken der Haagsche schildersconfrerie,” in Frederik Daniel Otto Obreen, ed., Archief voor Nederlandsche Kunstgeschiedenis 5 (1882–1883): 138.  For the painters’ guild Pictura see: Johan Gram, De Schildersconfrerie Pictura (The Hague, 1882). According to rule 2, painters from outside The Hague could join for eighteen guilders in order to sell their work in that city (pp. 12 and 19).

[7] Horace Walpole, Anecdotes of Painting in England with Some Account of the Principal Artists; and Incidental Notes on Other Arts; Collected by the Late Mr. George Vertue, 5 vols. (London, 1826–1828), 3:263.

1826
Walpole, Horace, George Vertue, and James Dallaway. Anecdotes of Painting in England: with some account of the principal artists; and incidental notes on other arts; collected by the late George Vertue; digested and published from his original MSS. 5 vols. London, 1826-1828: 3:262-264.