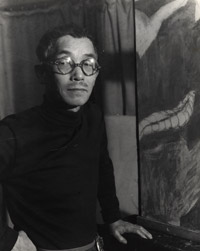 Born in Okayama, Japan, Yasuo Kuniyoshi had no intention of becoming an artist when he emigrated alone to the United States at age 16. Encouraged by a high school teacher in Los Angeles, he attended that city’s School of Art and Design for three years. In 1910 he departed for New York, where he first studied at the National Academy of Design and with , and from 1914 to 1916 at the Independent School with .

Over the next four years, while studying painting with at the Art Students League, Kuniyoshi began to mature artistically, befriend other artists, and gain wider recognition. In 1917 he participated in the debut exhibition of the Society of Independent Artists, where his work was noticed by artist, critic, and patron Hamilton Easter Field (1873–1922). A collector of American folk, modern, and Japanese art—and a proponent of their interconnectedness—Field strongly influenced Kuniyoshi as he developed his distinctive style. Field also provided him with a summer studio in the art colony of Ogunquit, Maine—where he married Art Students League classmate Katherine Schmidt—and an apartment and studio in Brooklyn.

Despite continuing financial struggles, in the 1920s Kuniyoshi exhibited his work frequently and emerged as an esteemed modernist. In 1922 he had his first of many solo exhibitions at the Daniel Gallery. Trips to Europe in 1925 and 1928 inspired him to shift from imaginary to more realistic paintings of women and still lifes, which received critical praise. His work was included in the 1929 Nineteen Living Americans exhibition at the Museum of Modern Art and in most national shows of contemporary art thereafter, as well as in many solo shows at the Downtown Gallery in the 1930s. During his 1931 visit to Japan, Kuniyoshi had three exhibitions of his paintings and became an important link between the New York art world and contemporary Japanese art. The following year he received a commission to paint murals in the women’s restrooms of Radio City Music Hall. In 1929 Kuniyoshi and Schmidt built a house in the artistic enclave of Woodstock, New York, where he summered for most of the rest of his life. (He and Schmidt divorced in 1932, and in 1935 he married actress Sara Mazo, whom he had met in Woodstock.)

During the tumultuous years leading up to and during World War II, Kuniyoshi became active in artists’ and political organizations and visited the Southwest and Mexico in 1935 on a Guggenheim fellowship. He returned to the Southwest in 1941, but later that year his life took a dramatic turn. Following the bombing of Pearl Harbor, he was classified by the United States government as an enemy alien. Prohibited from owning a camera or binoculars, the artist also had his bank account frozen and was subject to a curfew and travel prohibitions. During the war, he created drawings for the American propaganda effort.

Kuniyoshi’s later years brought him significant distinction but also grave disappointments. In 1948 he was the first living artist to receive a retrospective at the Whitney Museum of American Art, and in 1952 was selected to represent the United States at the 26th Venice Biennale along with , , and . His lifelong desire to become an American citizen was not realized; he completed the application in 1952 but died the following year of cancer before it was approved.