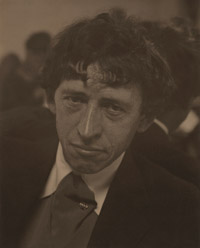 John Marin was born in Rutherford, New Jersey, the son of an accountant. His mother died shortly after he was born, and he was raised by his maternal grandparents and two aunts in Weehawken, directly across the Hudson River from New York City. He attended the Stevens Institute of Technology in Hoboken for a year, and beginning in 1893 worked for six years as a professional architect before deciding to become an artist. From 1899 to 1901 he studied at the Pennsylvania Academy of the Fine Arts in Philadelphia, where he initiated a lifelong friendship with the modernist painter , and then at the Art Students League in New York. In 1905 Marin traveled to Paris, studying briefly in the atelier of Auguste J. Delecluse and at the Académie Julian. He toured the continent before returning to New York late in 1909. During this period he was attracted to the work of and to the fauvism and cubism movements. He exhibited at the Salon des Indépendants and the Salon d'Automne, and produced a series of etchings that reflected the influence of . Another trip to Europe in the summer of 1910 resulted in a remarkable series of watercolors of the Austrian state of Tyrol.

A major event in Marin’s career occurred in 1909, when , impressed by Marin’s watercolors displayed at the Salon d’Automne, introduced him to the American photographer and art dealer in Paris. This meeting led to Marin’s first important exhibition at Stieglitz’s The Little Galleries of the Photo-Secession at 291 Fifth Avenue, known as "291," in 1910. Stieglitz became Marin’s friend and dedicated advocate, exhibiting his work more often than any artist other than .

By the early 1910s, Marin was based in New York, though he continued to travel widely in New York state and New England. He adapted the avant-garde ideas that had impressed him in Europe—Cézanne’s spare but rich watercolor technique as well as futurism and Orphic cubism—into a distinctive style, making bold, energetic watercolors of the city’s skyscrapers and the Brooklyn Bridge. In 1912 Marin married Marie Hughes and they settled in Cliffside, New Jersey. He made his first of what would become regular annual trips to Maine in 1914, and shortly thereafter bought an island at Small Point. Marin was fascinated by the Maine seacoast and landscape, which became a major source of inspiration for the rest of his life.

Marin spent the summers of 1929 and 1930 in Taos, New Mexico, and produced 100 watercolors that were shown to great acclaim at Stieglitz’s gallery An American Place in 1930 and 1931. Renowned as a watercolorist, in the 1930s he began to work more extensively in oils. In 1936 a retrospective exhibition of Marin’s work was held at the Museum of Modern Art in New York. By this time he was regarded as a major artist, and by the late 1940s he had achieved an extraordinary level of fame. In 1947 another major retrospective was held at the Institute of Modern Art in Boston, after which Look magazine pronounced him “America’s Artist No. 1.” In 1949 a major retrospective exhibition of his oils, watercolors, and etchings was held at the M. H. De Young Memorial Museum in San Francisco. In 1950 Yale University conferred upon Marin an honorary doctor of fine arts degree, as did the University of Maine.

Marin drew his imagery directly from nature, but always sought to capture its spirit and imagery rather than merely imitate it. Although he experimented with nonobjective compositions, he was uncomfortable with total abstraction. Nevertheless, the energy and gestural quality of his work exerted an influence on abstract expressionism. Depressed after the deaths of his wife and Stieglitz, Marin died at his summer home in Addison, Maine, on October 2, 1953, shortly before his 83rd birthday. The many works given to the National Gallery of Art by Marin’s son, John Marin Jr., and daughter-in-law, Norma B. Marin, have made the Gallery an important center for Marin studies.