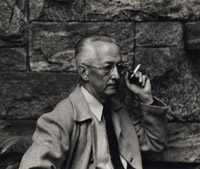 Born in Philadelphia, Charles Sheeler studied at the Philadelphia School of Industrial Art from 1900 to 1903 and for the following three years at the Pennsylvania Academy of the Fine Arts, primarily under . Between 1904 and 1909, Sheeler traveled to Europe a number of times and his exposure to the work of European modernists—particularly the compositional strategies of and the cubists—proved extremely influential on his early work.

Around 1910, Sheeler bought a camera and began working as a commercial photographer in Philadelphia. At the same time, he and his friend and fellow artist rented an 18th-century fieldstone house in Doylestown, Pennsylvania, as a weekend home. There Sheeler pursued both painting and noncommercial photography, often using the Doylestown house and other nearby examples of rural architecture as his subjects.

During this time, Sheeler traveled often to New York and began developing important relationships with dealers and collectors there and exhibiting in group shows, including the 1913 Armory Show. He was introduced to , who admired his Doylestown photos and encouraged Sheeler to reevaluate his notions about photography and explore it as a valid artistic medium. He also met the art collectors Walter and Louise Arensberg, who introduced him to the artists and intellectuals in their circle, including and . In 1919 Sheeler moved to New York. The following year he collaborated with the photographer on the short film Manhatta, an avant-garde project that sought to apply techniques of still photography to a motion picture.

Throughout the 1920s, Sheeler achieved both critical and financial success as a commercial photographer. In 1926 he was hired by to work for Condé Nast publications, producing fashion and celebrity photographs for the magazines Vogue and Vanity Fair. One of the turning points in Sheeler’s career came the following year, when the Ford Motor Company hired him to photograph the company’s River Rouge Plant in Detroit, Michigan. Sheeler’s stark, stylized images of the factory complex won him critical acclaim and were widely reproduced as icons of American industry. That same year Sheeler and his wife Katharine moved to South Salem, a small town outside of New York.

In 1931, the dealer Edith Halpert offered Sheeler exclusive representation at her Downtown Gallery in New York. She encouraged him to curtail his work in photography and focus his artistic energies on painting instead. Following a solo show at the Downtown Gallery, Sheeler promptly resigned from Condé Nast and turned his artistic attention toward oil, conté crayon, and tempera.

Beginning in the late 1920s, Sheeler’s paintings and drawings appeared in important exhibitions at the Museum of Modern Art, the Arts Club of Chicago, and the Whitney Museum of American Art, among others. His work entered the collections of many of these institutions, as well as those of important collectors of American modernism, including the Arensbergs, Duncan Phillips, and Ferdinand Howland.

Sheeler’s paintings from this time, many of which take inspiration from the artist’s own photographs, use the imagery of America’s rural past and industrialized present to explore modernist ideas of perception and representation. His carefully detailed and highly finished images of factories, farmhouses, and furniture were simultaneously geometric and abstract, alienated and historicized, mechanical and evocative. Central to this artistic practice was a continued intellectual and artistic exploration of the intersection between painting and photography and the influences the two mediums could have on each other.

This approach positioned Sheeler as a central figure in a group of American artists that came to be known as the precisionists (they were initially known as the “immaculates”). The precisionists, whose ranks included and , shared a common aesthetic that sought to depict an American iconography using geometric forms and flat, structured compositions.

In the late 1940s, Sheeler’s painting style underwent a significant change, moving away from photographic realism in favor of more abstract compositions that reflect the artist’s interest in photomontage. In these late works, Sheeler layered different photographic negatives of a single subject (often architectural) and translated this image onto a canvas. In 1959 he suffered a stroke that left him unable to paint or take photographs. Sheeler died six years later in Dobbs Ferry, New York, from a second stroke.