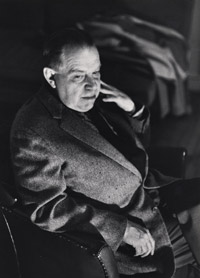 Stuart Davis was born on December 7, 1892, to a family of artists. His mother, Helen Stuart Foulke, was a prominent sculptor who exhibited at the Pennsylvania Academy of the Fine Arts. His father, Edward Wyatt Davis, was a newspaper art editor who employed a number of future members of anti-academy group The Eight as illustrators. Davis dropped out of high school in 1909 to study with Henri in New York City, and his early work was in a realist style. He became active in leftist politics, and in 1912 he began working as an illustrator for the socialist weekly The Masses. Davis was one of the youngest participants in the Armory Show in 1913, an event that inspired him to pursue modernism. Until the end of the decade, he experimented with various avant-garde styles, including fauvism and cubism. After spending the summer of 1914 in the modernist art colony in Provincetown, Rhode Island, Davis returned there almost annually until 1934.

By the early 1920s, Davis had abandoned realism and begun to paint landscapes, still lifes, and urban scenes (what he would later call “Color-Space Compositions”), using large, flat expanses of color to define spatial relationships. At about the same time, he began to introduce commercial products and advertising language into his compositions, which became a trademark of his work. In 1926 Davis was given a solo exhibition at the Whitney Studio Club; the next year, he joined Edith Gregor Halpert’s Downtown Gallery and had a successful show there. In 1928 Juliana Force, director of the Whitney Studio Club, purchased two of his paintings, enabling him to travel to Paris, where he resided in the Montparnasse district and began to paint Paris street scenes.

Davis returned to New York on the eve of the Great Depression in 1929 and settled in Greenwich Village. In 1933 he joined the Public Works of Art Project (later incorporated into the Works Progress Administration [WPA] in 1935), and under its auspices he completed several murals, including the dynamic Swing Landscape (1938, Indiana University Art Museum, Bloomington). Throughout the 1930s and 1940s he taught at the Art Students League and at the New School for Social Research. In 1938, six years after the tragic death of his first wife, Bessie Chosak, from an infection following an abortion, Davis married Roselle Springer. The couple had a son in 1952.

In 1948 Look magazine ranked Davis among the top ten living painters in the United States. Davis had a solo exhibition at the American Pavilion at the Venice Biennale in 1952, and his work was shown there again in 1956. After being elected to the National Institute of Arts and Letters in 1956, he was awarded the Solomon R. Guggenheim Museum International Award in both 1958 and 1960. Davis died suddenly from a stroke on June 24, 1964, at the height of his fame.