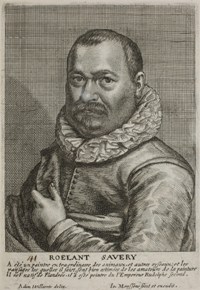 Jean Meyssens after Abraham Willers, Roelandt Savery, engraving, in Sebastiano Resta, The True Effigies of the Most Eminent Painters, and Other Famous Artists That Have Flourished in Europe (London, 1694), pl. 41, National Gallery of Art Library, David K. E. Bruce Fund

Roelandt Savery was born in the Flemish city of Kortrijk (Courtrai). During the religious upheavals of the 1580s his family made their way to the northern Netherlands, finally settling in Haarlem, where his older brother Jacques (Jacob, c. 1565–1603) entered the painters’ guild in 1587. Roelandt studied with Jacques and accompanied him to Amsterdam where Jacques became a citizen in 1591. Roelandt’s early landscapes indicate that he also had contact with , who came to Amsterdam in 1591, and with , who settled there in 1595. In 1604 Roelandt traveled to Prague to work for Emperor Rudolph II, likely because the Emperor wanted him to work in the tradition of , an artist he admired and collected. Following Rudolph’s death in 1612, Roelandt continued to work for his brother, Matthias.

Roelandt was sent by Rudolph in 1606–1607 to the Tyrolean Alps to record the “marvels of nature.” By 1613 or 1614 Savery had returned to Amsterdam. He was to move one more time, however, for in 1619 he settled in Utrecht and joined its painters’ guild. The twenty years spent in Utrecht until his death proved to be very successful for the artist. In 1626, for example, the city of Utrecht paid him 700 guilders for a painting of “all the animals of the air and earth,” to be presented to the wife of the Prince of Orange, Amalia van Solms. Among Savery’s pupils were , , and Gillis d’Hondecoeter (c. 1575–1638).