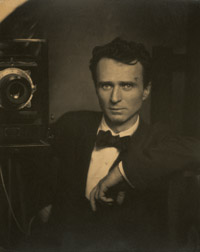 Born in Luxembourg, Steichen emigrated as a small child to the United States with his parents, eventually settling in Milwaukee, Wisconsin. At 15 he began a four-year apprenticeship at a lithography firm there and became interested in painting while studying at the newly established Milwaukee Art Students’ League. In 1895 he acquired his first camera. Steichen’s photographs from this time are soft-focused and atmospheric, reflecting his primary interest in painting and the influence of the impressionists, especially , as well as the American pictorialist photographers such as .

In 1900 Steichen made a brief stopover in New York City en route to Paris, where he was planning to study painting at the Académie Julian. White had come across the young artist’s photographs and was impressed enough to arrange for him to meet with at the Camera Club of New York. Stieglitz ended up purchasing three photographs from Steichen—a self portrait and two dreamy forest scenes—for the considerable price of five dollars apiece.

Once in Paris, Steichen soon gave up painting and began focusing exclusively on the medium of photography. His artistic education there was twofold: Steichen both worked to improve his technical skills behind the camera and in the darkroom and also availed himself of the city’s vast artistic resources. By the time he left Paris in 1902, he had established himself as a successful portraitist of writers, artists, and other high-profile clients.

Upon returning to New York in 1902, Steichen opened a professional portrait studio at 291 Fifth Avenue. The same year, he became a founder, along with Stieglitz, of the Photo-Secession group. This coincided with Stieglitz’s establishment of the magazine Camera Work, in which Steichen’s photographs frequently featured, including a “Special Steichen Supplement” in April 1906 and a monographic double issue in 1913. In 1905 the two artists repurposed Steichen’s studio space for photography exhibitions; originally called The Little Galleries of the Photo-Secession, the space became known simply as 291 after its Fifth Avenue address. Eleven of Steichen’s photographs were featured in 291’s inaugural exhibition and four solo shows of his work followed over the next few years. His studio portrait business continued to flourish, attracting celebrity clients such as banking magnate J. P. Morgan.

In 1906, feeling stifled by his portrait commissions and hoping to return to painting, Steichen moved back to Paris. Soon he was sending Stieglitz works of art for display at 291 by the European modernists he befriended there, including , , and . For some of these artists, it was the first time American audiences had been introduced to their work.

The outbreak of World War I forced Steichen’s return to New York. Though he continued to experiment with photography, especially complicated printing techniques, Steichen still identified himself as a painter. In 1915 an exhibition of his paintings was held at Knoedler Gallery, comprised of small works he had been able to take out of France as well as works already in the United States owned by friends and patrons. Also included were seven canvases listed in the catalog as “Mural Decorations Painted for Mr. and Mrs. Eugene Meyer, Jr. Motive: -- In Exaltation of Flowers,” a commission Steichen had worked on from 1911 to 1914. Two years later Knoedler organized a second show of Steichen’s paintings.

When the United States entered World War I, Steichen’s attention turned to photojournalism. From 1917 to 1919 the artist served as the commander of the photographic division of the US Army Expeditionary Forces, overseeing the production of aerial photographs. This photographic turn caused a rift with Stieglitz, who had loftier ambitions for the medium. The two suffered a personal and professional schism when Steichen accepted a job with Condé Nast to produce fashion and celebrity portraits, a role which won him great acclaim. By that time, Steichen’s commitment to the photographic medium was absolute. He had even taken the symbolic step of burning all of the paintings remaining in his studio in France sometime between 1920 and 1923.

During World War II the artist once again enlisted and was placed in charge of all naval combat photography. In 1947 Steichen gave up his artistic practice and became director of the photography department at the Museum of Modern Art (MoMA), where in 1955 he organized the Family of Man exhibition. Featuring 503 photographs of the human experience from hundreds of photographers both professional and amateur from around the world, the show went on to travel the globe and was seen by over nine million people.

A retrospective of Steichen’s work was held at MoMA in 1961; he retired the following year and the museum's photography department is named for him. President Lyndon Johnson presented Steichen with the Presidential Medal of Freedom in 1963. In the last decade of his life Steichen spent much of his time on his farm in West Redding, Connecticut, where he grew prize-winning delphiniums and revisited his early interest in landscape photography. Steichen passed away at home the day before his 94th birthday.