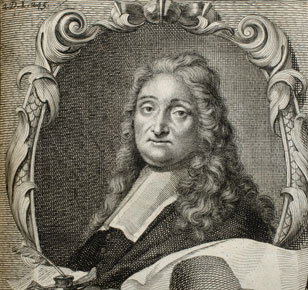 Ludolf Backhuysen, whose name appears in the literature in a number of different forms (for example, Bakhuysen, Backhuisen, and Bakhuizen), was born in the German town of Emden on December 18, 1631. He was the son of a scribe, Gerhard Backhaus, and initially followed in his father’s footsteps, working as a clerk in the government offices at Emden. After the family moved to Amsterdam in 1649, he held a similar post with the firm of the wealthy merchant Guilielmo Bartolotti van den Heuvel, a fellow native of Emden.

In 1656, while apparently still working for Bartolotti, Backhuysen is recorded as a member of Kalligraphie, a society of those proficient in beautiful penmanship. From 1650 onward he was also working as a draftsman, producing “pen paintings” and grisailles. As late as 1657 and 1660, he is still referred to in documents as a draftsman, and although his earliest dated oil painting was executed in 1658, he did not join the painters’ guild until February 1663. By this time any formal training he may have received in the art of painting must have been completed. No contemporary records of any apprenticeship survive, but Houbraken states that Backhuysen studied first with and then with Hendrick Dubbels (1620/1621–1676?).

Despite his late start as a professional painter, Backhuysen rapidly gained widespread fame and patronage. He became the unchallenged leading seascape painter of the Netherlands after and his son immigrated to England in late 1672 or early 1673. Even as early as 1665, it was to Backhuysen that the burgomasters of Amsterdam turned when commissioning a large view of the city’s harbor to send as a gift to Hughes de Lionne, Marquis de Berny, a minister of Louis XIV of France. For this painting the artist was paid the sizable sum of 1,275 florins.

Backhuysen’s clientele is reported to have included a number of other European rulers—among them Peter the Great of Russia, the king of Prussia, the elector of Saxony, and the grand duke of Tuscany—and his works continued to be extremely popular with leading collectors throughout the eighteenth and early nineteenth centuries. After about 1850, however, his reputation began to wane, and only recently has he once more come to be considered a leading master of Dutch marine painting.

Backhuysen’s canvases are often large and frequently depict stormy scenes. His lighting and color schemes are typically more dramatic than those of his contemporary Willem van de Velde the Younger, although some of their works of the 1670s are rather similar and on occasion have been confused. It is not clear if one artist influenced the other at this time or if their stylistic convergence was coincidental. A painter upon whom Backhuysen certainly did exert an influence was Abraham Storck (1644–1708). He also had a number of pupils, including Hendrick and Jan Claesz Rietschoof, Michiel Maddersteg, Jan Dubbels, , and Anthonie Rutgers.

In addition to the seascapes for which he is famous, Backhuysen painted some portraits, allegorical compositions, and townscapes. Besides his work as a calligrapher, he was also a printmaker. He married four times, and died after a long illness in Amsterdam, where he was buried in the Westerkerk on November 17, 1708.