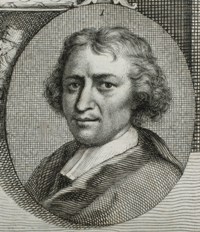 Gerbrand van den Eeckhout was born in Amsterdam on August 19, 1621, and died in his native city on September 22, 1674. Although his life and artistic career are scantily documented, Arnold Houbraken wrote that Van den Eeckhout was a favorite pupil and long-standing friend of . [1] The dates of his apprenticeship with Rembrandt are unknown, but he most likely studied with the master during the latter half of the 1630s. His first dated paintings are from 1640.

During his long and productive career Van den Eeckhout made history paintings, landscapes, portraits, and genre scenes. He was also an accomplished graphic artist and produced a large number of etchings, drawings, designs for metal objects, and book illustrations. He often varied his painting style according to subject matter. The broad brushwork and powerful chiaroscuro effects of his religious and mythological paintings generally reflect the influence of Rembrandt and also that of his master’s teacher, Pieter Lastman (1583–1633), whose paintings and drawings he would have seen in Rembrandt’s workshop. Lastman’s inspiration is particularly evident in the attention Van den Eeckhout paid to sumptuous attire and in his use of a stagelike platform on which to present his narrative. On the other hand, Van den Eeckhout executed his portraits and genre scenes in a refined and elegant manner that reflected a more Flemish pictorial tradition. In addition to his artistic activities he was also an amateur poet of some ability. He served as a tax appraiser of artworks in Amsterdam in 1659, 1669, and 1672.