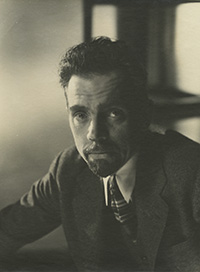 Carl Raymond Johnson (later known as just Raymond Jonson) was born on July 18, 1891, in Chariton, Iowa. Jonson’s parents were immigrants from Sweden. The family moved throughout the West and Midwest for Jonson’s father’s work as a Baptist minister, eventually settling in Portland, Oregon, in 1902. In 1909 Jonson became the first pupil to enroll in the newly established Museum Art School of the Portland Art Association, where he studied with Kate Cameron Simmons, a former student of . The following year he moved to Chicago and entered the Chicago Academy of Fine Arts; shortly thereafter he attended the Art Institute of Chicago. He was deeply influenced by the Swedish immigrant painter B. J. O. Nordfeldt, a teacher at the academy who was sympathetic to progressive art. Jonson’s development as an artist was strongly influenced by his exposure to an exhibition in 1912 and the Chicago Armory Show in 1913.

From 1912 to 1917 he was the lighting, stage set, costume, and graphics designer for the experimental Chicago Little Theatre. Jonson gained an international reputation for his minimal theater designs and the invention of a nine-switch dimmer board that dramatized lighting effects. In 1916 he married Vera White, a secretary for the theater. Jonson, who had made trips to the West to draw and paint since 1914, became disillusioned with urban life and moved to Santa Fe, New Mexico, in 1924. This marked the end of Jonson’s career in theater.

In New Mexico Jonson tirelessly advocated modernism through teaching and organizing exhibitions. He painted increasingly abstract landscapes in New Mexico until he developed a signature geometric style. In 1934, supported by a Works Progress Administration grant, he painted six large murals for the University of New Mexico at Albuquerque and began to teach there part-time. In 1938 he founded the Transcendental Painting Group of abstract artists; among other members were and Agnes Pelton. The group’s goal of promoting pure abstraction paralleled the activities of the American Abstract Artists in New York, and Jonson maintained friendships with some of the key participants in that movement, including , , and . Beginning in the mid-1930s his work was exhibited in leading modernist galleries in Los Angeles and Chicago and at the Museum of Non-Objective Painting (the forerunner of the Guggenheim Museum), as well as in Santa Fe. Jonson began to teach at the University of New Mexico full-time in 1950, living in the Jonson Gallery, a studio, residence, and exhibition space that had been specially built on campus for him. He became emeritus professor of art at the university in 1954 but remained director of the gallery. Jonson continued to paint and exhibit widely throughout the United States until his death in 1982.

Throughout his career Jonson devoted himself to a quasi-mystical goal of achieving visual harmony through what he called the design or “unifying principle,” in which a successful painting embodied his emotional, intellectual, and physical experiences and exhibited a high degree of craftsmanship. Instinct and intuition played major roles in his creative process. He believed that the attainment of this ideal was possible only through abstraction. Jonson was strongly influenced by the art and writings of , and many of his boldly colored abstractions contain biomorphic elements. He also admired and painted geometric abstractions. Jonson was a methodical, individualistic artist who worked in a range of styles and techniques—a pioneer in the history of American abstract painting.