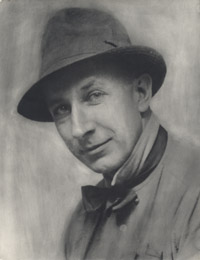 George Bellows was born in Columbus, Ohio, on August 12, 1882, the only child of a successful building contractor from Sag Harbor, Long Island, New York. He entered Ohio State University in 1901, where he played baseball and basketball and made drawings for college publications. He dropped out of college in 1904, went to New York, and studied under at the New York School of Art, where , , and were his classmates. A superb technician who worked in a confident, painterly style, Bellows soon established himself as the most important realist of his generation. He created memorable images of club fights, street urchins swimming in the East River, and the Pennsylvania Station excavation site and garnered praise from both progressive and conservative critics. In 1909 he became one of the youngest artists ever admitted as an associate member of the National Academy of Design.

In 1910 Bellows began teaching at the Art Students League and married Emma Story, by whom he had two daughters. After 1910 Bellows gradually abandoned the stark urban realism and dark palette characteristic of his early work and gravitated toward painting landscapes, seascapes, and portraits. His style changed as he explored the color theories of Hardesty Maratta and Denman Ross, and later Jay Hambidge’s compositional system of dynamic symmetry.

Bellows helped organize the Armory Show in 1913, in which five of his paintings and a number of drawings were included. That year he was elected a full member of the National Academy of Design. He had leftist political views and contributed illustrations to the Socialist publication The Masses from 1912 to 1917. Bellows began to make lithographs in 1916, and his exceptional talent engendered a revival of interest in the medium. He worked in Maine, in Carmel, California, and in Middletown, Rhode Island, and was a founding member of the Society of Independent Artists and a charter member of the Association of American Painters and Sculptors. In 1919 he taught at the Art Institute of Chicago. After painting the landscape near Woodstock, New York, in 1920, he bought a house there the following year. He died of appendicitis in New York on January 8, 1925, at the age of 42.

Bellows, who never went to Europe, is regarded as a quintessential American artist whose vigorous style enabled him to explore a wide range of subjects from scenes of modern urban life to portraits of his daughters, to turbulent Maine seascapes. As an early biographer noted, Bellows “caught the brute force of the prize fighter, the ruggedness of the country pasture, the essence of childhood and recorded them appropriately not only for his own generation but for all time.”[1]