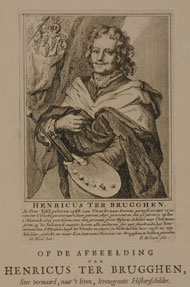 Hendrick ter Brugghen was born in 1588, probably in The Hague. His parents, Jan Egbertsz ter Brugghen and Feysgen Dircx, came from Utrecht but lived for a time in The Hague because of Jan’s career as a civil servant. He served as secretary to the court of Utrecht in 1581 and became bailiff of the States of Holland in 1585. By 1603 the family was living in Abcoude, a village midway between Utrecht and Amsterdam. During these years, Ter Brugghen may have been apprenticed to the Utrecht mannerist .

After his training, Ter Brugghen traveled to Italy, though it is not certain when he left the Netherlands. In the spring of 1607 a cadet named “Henrick ter Brugge,” probably the artist, was recorded in the army of Count Ernst Casimir of Nassau-Dietz, hence it would seem that his trip did not occur until later that year at the earliest.[1] Cornelis de Bie stated that Ter Brugghen met in Rome, which means that he must have been there before October 1608, when the Flemish master returned to Antwerp.[2] Ter Brugghen returned to Utrecht in the fall of 1614 and declared that he had spent “several” (ettelicke) years in Italy.[3] The only thing known with certainty is that during the summer of 1614 he lived in Milan with the Utrecht artist Thijman van Galen before returning home in the company of Van Galen, the Utrecht painter Michiel van der Zande, and his apprentice Frans van Knibbergen.

In 1616 Ter Brugghen registered as a master painter in Utrecht’s Saint Luke’s Guild. In October of that same year he married Jacomijna Verbeeck, the stepdaughter of his eldest brother, the innkeeper Jan Jansz ter Brugghen. The marriage took place in the Reformed Church, where at least four of their eight children were baptized. Ter Brugghen himself was not a member, and his wife joined only after her husband’s death.  For the first ten years of their marriage, Ter Brugghen and his wife lived in rented quarters in the Korte Lauwerstraat, and by 1626 they had moved to the Snippevlucht, a narrow street near the center of town, where they rented a large house from Johan Wtewael, brother of the painter . Ter Brugghen died on November 1, 1629, at the age of forty-two, during an epidemic of the plague. He was buried in the Burrkerk. His wife, who was pregnant at the time of Ter Brugghen’s death, gave birth in March 1630 to a daughter named Henrickgen, after her father.

As the most important of the Utrecht Caravaggisti—the Dutch followers of —Ter Brugghen, along with and , was instrumental in bringing the Italian artist’s radical stylistic and thematic ideas back to the Netherlands. Ter Brugghen painted biblical and mythological scenes as well as genre works, often with figures playing musical instruments. He is renowned for the boldness of his images and for the subtle tonalities with which he modeled his forms. His broad style, markedly different from the detailed realism of most Dutch painting of his day, allowed him to create a great sense of dignity and grandeur in his figures. Rubens admired these qualities when he visited Ter Brugghen in Utrecht in 1627 and purportedly decreed that Ter Brugghen was the only “real painter” he had met in the Netherlands.[4] Ter Brugghen’s religious and genre scenes resonated with Dutch artists, and his influence was felt widely in Utrecht and beyond.

[1] Joaneath A. Spicer and Lynne Federle Orr, Masters of Light: Dutch Painters in Utrecht during the Golden Age (New Haven, 1997), 379.

[4] Rubens’ admiration for Ter Brugghen was recorded by Ter Brugghen’s son, Richard, who published a pamphlet in 1707 defending his father’s reputation as an artist.