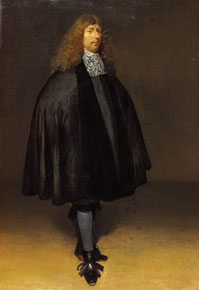 The most accomplished member of a gifted and well-to-do artistic family, Gerard ter Borch was born in Zwolle in 1617. Probably not long after the death of his mother, Anna Bufken, in 1621, Ter Borch began his training with his father, the draftsman Gerard ter Borch the Elder (1584–1662). He was clearly a precocious pupil: an accomplished drawing he made of a figure seen from behind (Rijksprentenkabinet, Rijksmuseum, Amsterdam) is dated September 25, 1625, when he was only eight years old. An inscription on another drawing suggests that he was in Amsterdam by 1632, but in 1633 he was back in Zwolle. The following year he went to Haarlem to study with and entered the guild there in 1635. The same year Ter Borch undertook the first of his many trips abroad, traveling to Lon­don to work with his uncle, the engraver . According to Houbraken, the painter later visited Italy, Spain, France, and Flanders. In Spain Ter Borch was so highly esteemed that King Philip IV sat for the artist.

By 1646 Ter Borch was in Münster, Westphalia, where he painted a number of small works and also his famous group portrait The Swearing of the Oath of Ratification of the Treaty of Münster (1648, National Gallery, London, inv. no. 896). Arnold Houbraken suggests that Ter Borch subsequently traveled with the Conde de Peñaranda to Brussels, where he appears to have been knighted and to have received a gold chain and medal from the king of Spain. Documents place the artist in Amsterdam in November 1648, The Hague in 1649, Kampen in 1650, and Delft on April 22, 1653, when he and were cowitnesses to the signing of an affidavit. On February 14, 1654, Ter Borch married Geertruyt Matthijs, with whom he settled in Deventer, becoming a citizen on February 13, 1655, and a gemeensman (city counselor) in 1666. Although documents indicate he again visited Amsterdam in 1674 and The Hague and Haarlem in 1675, he lived in Deventer until his death on December 8, 1681.

In his earliest works, Ter Borch depicted barrack-room scenes similar to those of Willem Duyster (1598/1599–1635) and Pieter Codde (1599–1678). Most of his later genre scenes, however, focused on the more refined elements of Dutch society. These works are generally small and upright in format and typically depict two or three elegantly clad, full-length figures engaged in an activity such as letter writing or music making. They are executed with great sensitivity of touch and show an interest in the psychology of the sitters. Ter Borch also painted many small-scale, full-length portraits. His most important student was , who learned many of his master’s techniques for rendering luxurious textures and who painted, in addition to his original compositions, a number of signed copies of Ter Borch’s works.

1988
Kettering, Alison McNeil. Drawings from the Ter Borch studio estate. 2 vols. Catalogue of the Dutch and Flemish Drawings in the Rijksprentenkabinet 5. The Hague, 1988.