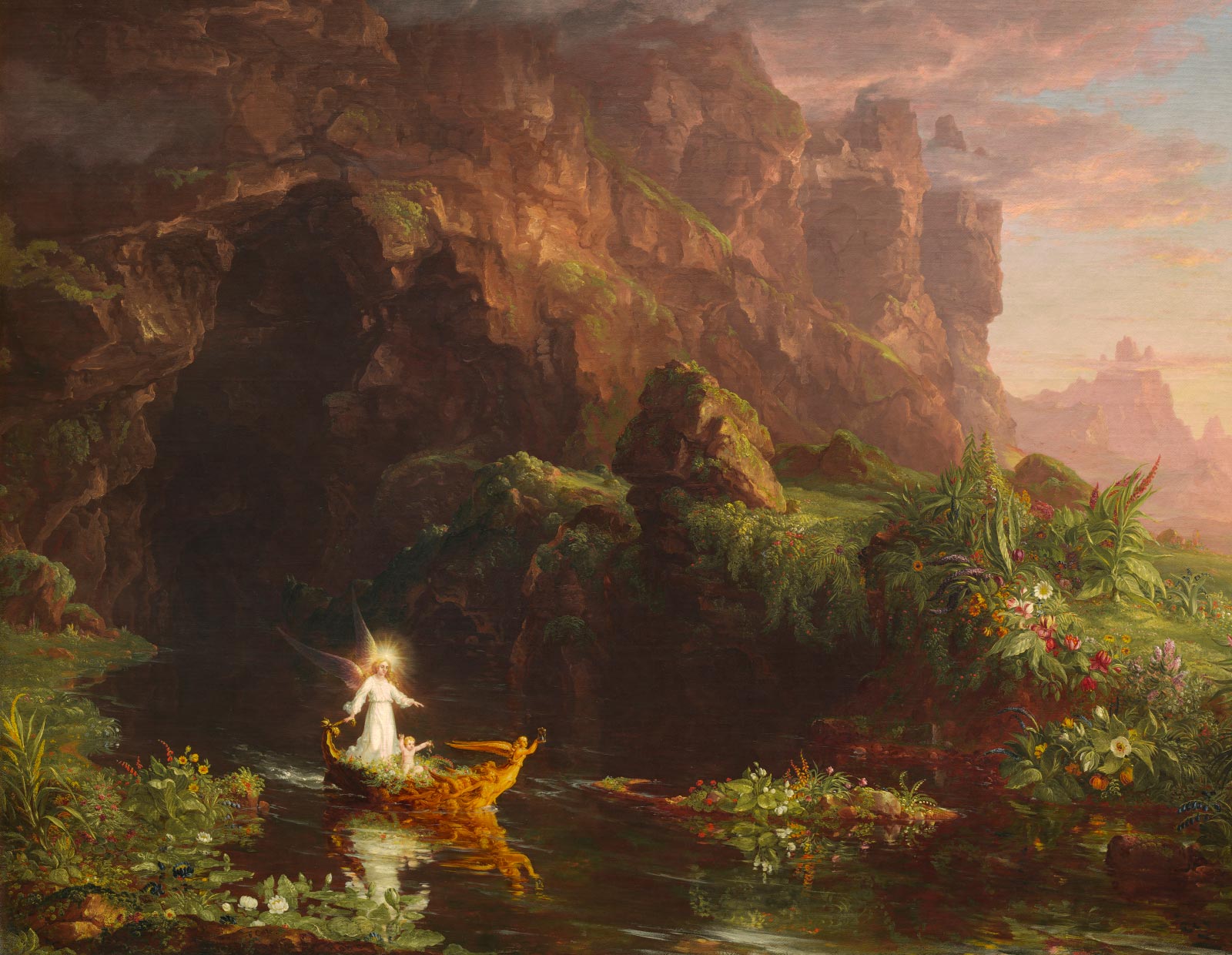 The Voyage of Life: Childhood

...he wished his canvases at the same moment to speak a language eloquent of God and man, and human life.

believed landscape paintings could impart moral and religious values. Although he achieved considerable success from his straightforward depictions of American scenery, his greater ambition was to convey the word of God through sublime landscapes.

Cole’s four-part allegorical series, , was not his first ideological work. After traveling to Europe where he studied British history painting and works by old masters, Cole returned to New York and painted the large work, Angel Appearing to the Shepherds (1833–1834), and the five-canvas series, the Course of Empire (1833–1836). While the paintings garnered popular attention and favorable reviews, however, Cole feared that the messages of these works were not evident to viewers.

In the The Voyage of Life, Cole made several adaptations to make his moral and religious messages more clear. In contrast to the Course of Empire’s grand, panoramic scenes of nature and architecture, flush with details and incidents, Cole painted The Voyage of Life in a simplified style. He focused his story by painting the unfolding life of one man, as opposed to the complicated rise and fall of a nation. To further his interpretation of the series’ symbolic imagery, Cole wrote explanatory texts to accompany each painting. The texts effectively served as a reading companion for the viewers.

The Voyage of Life traces a pilgrim’s journey along the "River of Life.” In “Childhood” a golden boat emerges from a darkened cave—a mysterious earthly source—from which a joyous infant reaches out to the world with wonder and naivete. Rose light bathes the scene of fertile beauty as an angelic figure guides the boat forward.

In “Youth,” the voyager confidently assumes control at the helm of the boat. Oblivious to the increasing turbulence and unexpected twists of the stream, the pilgrim boldly strives to reach an aerial castle, emblematic of adolescent ambition for fame and glory.

Nature's fury, evil demons, and self-doubt threaten the voyager in the next painting, “Manhood.” As Cole said, “The helm of the boat is gone”; the voyager has lost control of his life. The angel looks down from the clouds as he is whirled toward violent rapids and bare, fractured rocks. Only divine intervention, Cole suggests, can save the voyager from a tragic fate.

In the series’ last painting, “Old Age,” the stream of life has reached the ocean of eternity where the voyager floats aboard his broken, weathered vessel. All signs of nature and “corporeal existence” are cast aside. The guardian angel, whom he sees for the first time, directs his gaze toward a beckoning, soft light emerging from the parting clouds—the vision of eternal life.

From the innocence of childhood to the flush of youthful confidence, through the trials of middle age and finally, to divine salvation, The Voyage of Life evokes the Christian doctrine of death and resurrection. Cole's intrepid voyager can also be interpreted as a personification of America—a country at its own adolescent stage of development.

Thomas Cole, considered the founder of the Hudson River School of American landscape painters, was born on February 1, 1801, in Bolton-le-Moor, England. Before emigrating with his family to the United States in 1818, he served as an engraver's assistant and as an apprentice to a calico print designer. While living in Steubenville, Ohio, Cole learned the basics of oil painting from an itinerant portrait painter. In 1823 he began experimenting with drawing from nature, creating detailed and expressive images of trees and branches. Later that year he moved to Philadelphia to study at the Pennsylvania Academy of the Fine Arts.

In April 1825 Cole moved to New York City, and shortly thereafter began making extensive sketching trips up the Hudson River and into the Catskill Mountains. In late October 1825, three of his landscapes were purchased by prominent figures in the young nation's art community: John Trumbull (1756–1843), William Dunlap (1766–1839), and Asher B. Durand (1796–1886).

Cole had numerous commissions in the late 1820s to paint his famed views of American landscapes. But with his ambition to paint a “higher style of landscape” to communicate his beliefs and values, Cole began painting large allegorical works, such as the five-canvas series Course of Empire (New-York Historical Society). During this period, William Dunlap’s 1834 A History of the Rise and Progress of the Arts of Design in the United States pronounced Cole “one of the finest painters in landscape...that the world possesses.”

Cole continued to paint American landscapes in the 1830s and 1840s, but much of his energy was focused on creating complex imaginary works, including Departure and Return (1837, Corcoran Gallery of Art, Washington, D.C.) and The Voyage of Life (1839–1840, Munson-Williams-Proctor Art Institute, Utica, and 1842, National Gallery of Art, Washington, D.C.).

Cole actually painted two versions of the Voyage of Life. After the first set was restricted from public view by the owners, Cole painted a duplicate set, which he exhibited from 1843–1844 in New York, Boston, Philadelphia, and other cities. The second set, owned by the National Gallery of Art, received much acclaim after James Smillie produced and distributed engravings of the series.

Following Cole’s death in 1848 at age 47, a comprehensive memorial exhibition of his works was held at the American Art-Union in New York. Close to 500,000 people (equivalent to half the population of New York City at the time) came to see the exhibition. Cole’s influence on the course of American landscape painting was profound and his works influenced numerous younger painters who matured in the late 1840s and early 1850s, most notably Jasper F. Cropsey and Frederic Edwin Church.