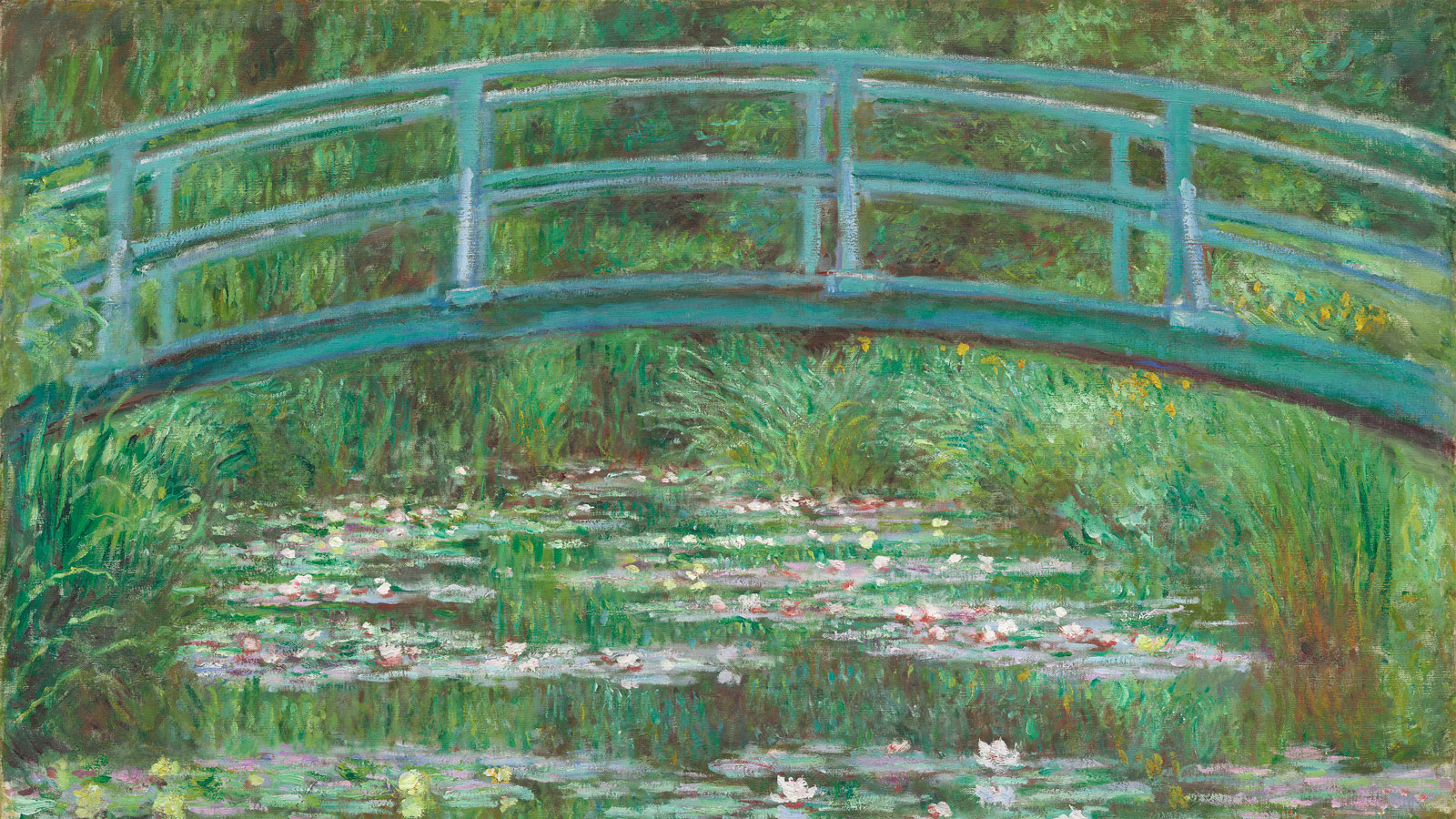 It took me a long time to understand my water lilies…. I grew them without thinking of painting them…. And then, all of a sudden, I had the revelation of the enchantment of my pond. I took up my palette.

Ten years after moving to Giverny in 1883, envisioned turning a small pond on an adjacent parcel of land into an Asian-influenced water garden. Overcoming the resistance of locals wary of introducing foreign plants into the region, Monet won approval to expand the pond by diverting water from the Epte River. He encircled the basin with a vivacious arrangement of flowers, trees, and bushes, and the next year filled it with water lilies. He added a Japanese-style wooden bridge in 1895, then a few years later started to paint the pond and its water lilies—and never stopped, making them the obsessive focus of his intensely searching work for the next quarter century.

Lush and luminous, immerses us in the physical experience of being in the garden. With the bands of the blue bridge suspended like a canopy near the top of the canvas and no sky to be seen, the water and billowing foliage fill the visual field, immersing the viewer in the verdant, brightly colored waterscape. Cool blue and green tones predominate, but are balanced by the pink, white, and yellow lilies floating in complex pattern across the surface of the water from near to far. Controlled, vertical dabs of paint define the sparkling greenery and its fleeting reflection in the water, while the more fluid lilies are rendered with broad, textured, horizontal strokes that emphasize the shared physicality of the paint and the landscape.

Deeply admiring nature’s central role in Japanese culture, Monet here fuses Japanese motifs with his impressionist palette and brushstrokes to posit a hybrid, transcendent understanding of nature’s primacy. He first seriously explored translating the garden into paint in the summer of 1899, producing a series of 12 views of its light-dappled surface, arching footbridge, and surrounding flora. He exhibited the paintings, including this one, at the Durand-Ruel Gallery in Paris the following year.

Claude Monet was raised on the Normandy coast in Le Havre, where his father sold ships’ provisions. He gained a local reputation as a caricaturist while still a teenager, and landscape painter invited the budding artist to accompany him as he painted scenes at the local beaches. Boudin introduced Monet to plein-air (outdoor) painting, which would prove a decisive influence in his career.

Monet went to Paris in 1862 to study painting and there befriended fellow students , , and , who would later form the core group of the original impressionists. By the end of the 1860s, Monet had largely abandoned ambitious, large-scale figurative painting in favor of smaller, spontaneous landscape works executed en plein air.

During the Franco-Prussian War, Monet fled to London, and in late 1871 he settled at Argenteuil, a suburb just west of Paris that maintained its rustic charm even as it underwent rapid modernization. From 1872 to 1876 Argenteuil became the hub of what would soon be known as impressionist painting. Monet and his colleagues organized an exhibition of their work in Paris in 1874; one of Monet’s exhibited works, Impression, Sunrise (1873), a loosely painted sketch of an industrial seascape, led critics to derisively dub the group “the impressionists.” Financial difficulties forced Monet to relocate to Vétheuil in 1878, and in 1883, he settled in Giverny, where he would live for the rest of his life.

Most of Monet’s paintings from the 1870s depict the landscape in and around the small towns along the Seine. Working outdoors, he employed seemingly spontaneous brushstrokes to capture the ever-changing effects of light and atmosphere. In the 1880s Monet expanded his motifs, turning his attention both to the Mediterranean and to the rugged vistas along the Normandy coast. In the 1890s he undertook a number of paintings produced in series, including pictures of poplars, grainstacks, and Rouen Cathedral; each work captured a specific atmospheric effect and time of day. With his reputation as France’s leading landscape painter established and his financial situation secure, the artist turned his attention to the lavish gardens he had constructed at Giverny, eventually creating more than 250 works focused on water lilies.