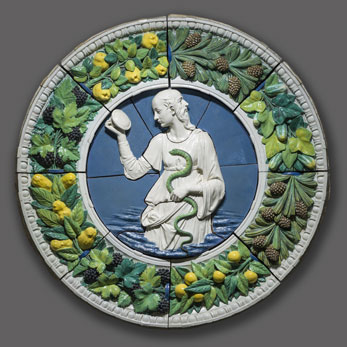 (1399/1400–1482), a master sculptor in marble and bronze, invented a glazing technique for terracotta sculpture that positioned him as one of the most innovative artists of the 15th century. Today, the sculptures created by Luca and his family workshop retain their brilliant opaque whites, deep cerulean blues, and botanical greens, purples and yellows over modeling that makes them powerful and engaging examples of Italian Renaissance art. Resistant to weather and easily readable at a distance, Della Robbia works were widely collected in the late 19th and early 20th century by Americans traveling to Italy who sought to bring something of the Renaissance home. Della Robbia: Sculpting with Color in Renaissance Florence will present some 40 works by Luca, his nephew Andrea (1435–1525), Andrea’s sons, and the competing Buglioni workshop. The sculptures come chiefly from American collections but also include major international loans, among them Luca's masterpiece of sculpture in the round, The Visitation, on view outside of Italy for the first time. Various sculptural types—Madonna and Child reliefs,  portraits, architectural decorations, household statuettes and active full-scale figures—will show the range and emotional appeal of Della Robbia glazed ceramics. Technical analysis and conservation conducted at the Museum of Fine Arts, Boston, the Brooklyn Museum, the National Gallery of Art, and the Metropolitan Museum of Art will provide new insight into how these groundbreaking works were made. A richly illustrated book, the first English-language overview of three generations of Della Robbia sculpture, will accompany the exhibition.

Organization: Organized by the Museum of Fine Arts, Boston, in association with the National Gallery of Art.

Sponsors: This exhibition is made possible by Altria Group on behalf of Ste. Michelle Wine Estates, and by Marchesi Antinori S.p.A. Major support is provided by Sally Engelhard Pingree and The Charles Engelhard Foundation, and the Buffy and William Cafritz Family Foundation. Additional funding is provided by The Exhibition Circle of the National Gallery of Art.

Lecture
Sculpting with Color in Renaissance Florence: An Introduction to the Della Robbia Exhibition
February 5 at 12:00