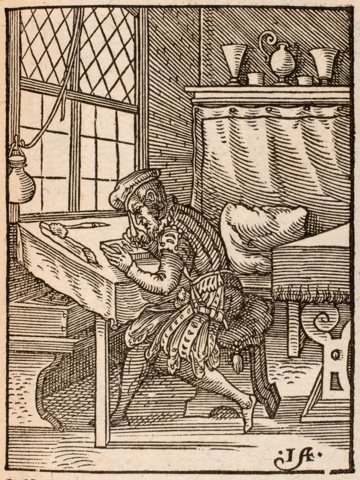 was born in Zurich in 1539, the son of a noted scholar. Despite opting to train as an artisan, he maintained connections with humanist scholars throughout his career. Little is known of his early years or where he received his training, but by 1561 he had relocated to Nuremburg where he became one of northern Europe’s most prolific printmakers and book illustrators of the late sixteenth century.

Amman may have trained in the workshop of (1514–1562), whom Amman essentially replaced as the premier illustrator for Frankfurt publisher Sigmund Feyerabend (1528–1590). Solis had begun illustrations for a bible that would be published in 1564, and Amman may have been an apprentice tasked with cutting the woodblocks for Solis’s drawings. Amman became essentially an employee of Feyerabend, one of the most productive publishers of the late sixteenth century. He provided Amman with a majority of his commissions as the two collaborated on at least fifty books.

Little is known of Amman’s working methods beyond an anecdote from one of his pupils attesting to the master’s prolific work as a draftsman. Although Amman’s drawings were also printed via copperplate etchings and engravings, his woodcut illustrations were especially popular. This exhibition focuses on Amman’s woodcuts, presenting them alongside those of his predecessors such as Solis, , and as well as contemporaries like . We know that Amman cut most of his own blocks, at least early on. Later in his career he likely would have overseen the translation of his drawings into woodblocks by others, and we are aware that he had several apprentices. Yet evidence of his financial difficulties and the fact that he also did ornamental designs for borders, tailpieces, and printer’s marks in many of the books he illustrated raise the possibility that he continued to prepare many of his own blocks.

The books presented in this exhibition show a form of illustration at its apogee in the late Renaissance, although it would decline in the seventeenth century as the baroque took hold. Etching and engraving became most publishers’ media of choice for all but the most basic book illustrations. Shown alongside other examples of sixteenth-century woodcut illustrations, the exhibition aims to elucidate Amman’s particular combination of precise simplicity with fanciful imagination to produce economical woodcuts that serve books with a wide variety of purposes. During his career Amman completed hundreds of designs for dozens of book commissions, from bibles to classics, history to literature, costumes to emblems. Despite enjoying respect among his contemporaries, the quality of Amman’s work was criticized after his death in 1591. Yet his prints continued to be copied and re-used, becoming pattern books that influenced artists such as and .