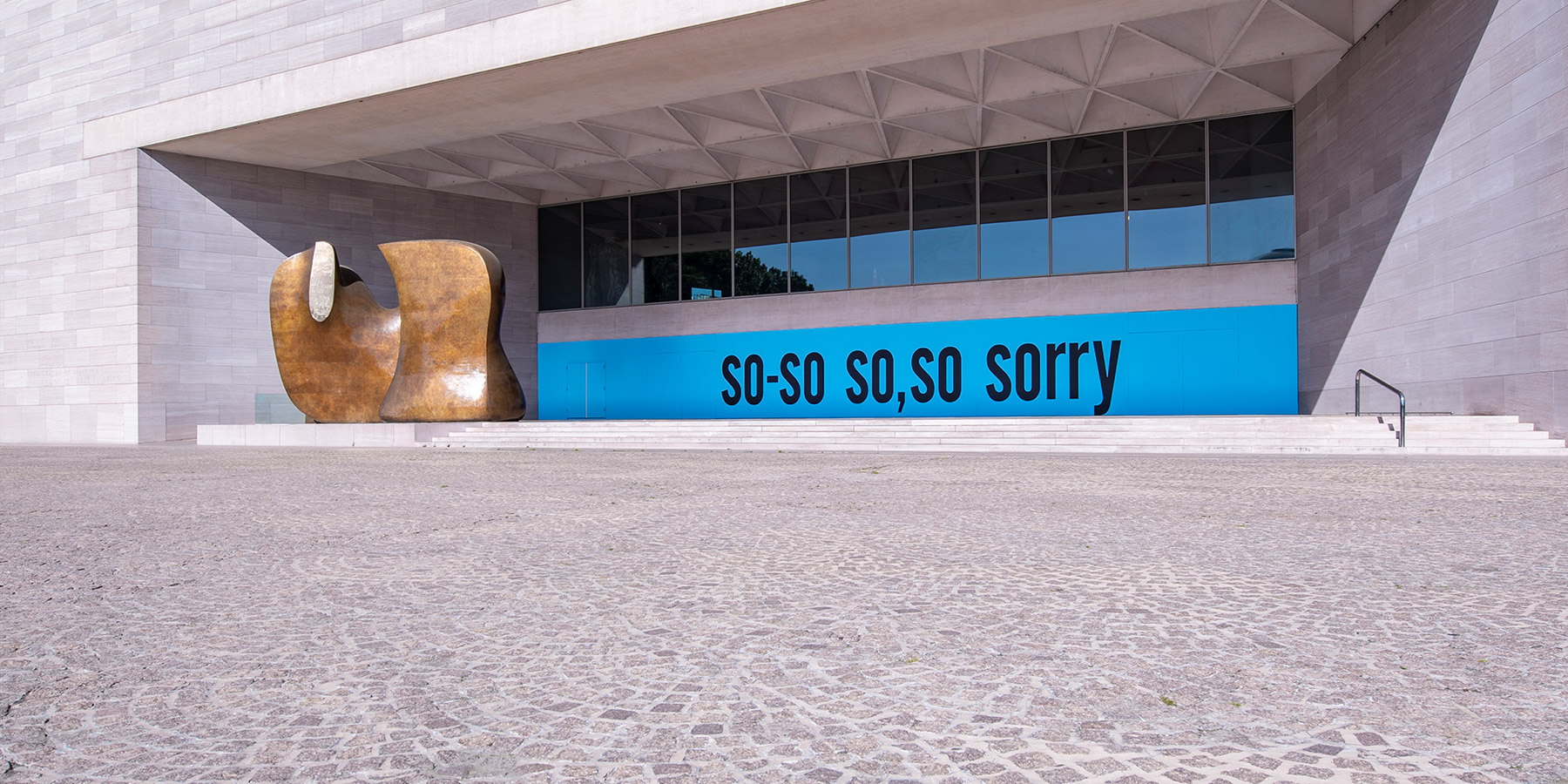 You’ll be so, so sorry if you don’t hurry to experience site-responsive installations by artists Kay Rosen and Avish Khebrehzadeh. Their works transform the familiar spaces of the East Building in unexpected ways while the museum’s skylights are being replaced.

Avish Khebrehzadeh’s Tree of Life in Blue and Seven Silent Songs remain on view until February 27, 2022. Kay Rosen’s SORRY is outside the East Building into the springtime.

Sarah Cain’s installation My favorite season is the fall of the patriarchy was on view June 18–October 3, 2021. 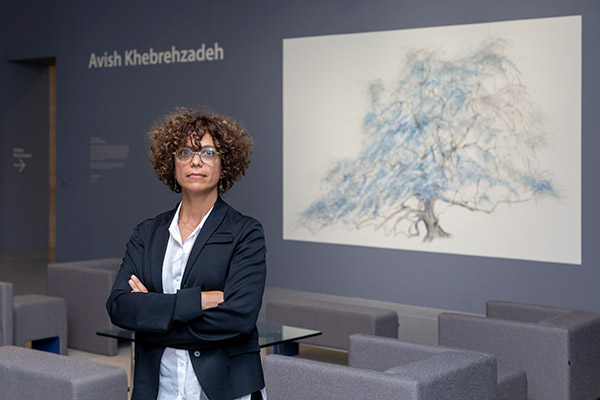 Avish Khebrehzadeh with Tree of Life in Blue at the National Gallery, 2021.

Avish Khebrehzadeh made thousands of drawings to create her animated video Seven Silent Songs. She digitized, edited, and set the drawings in motion in six linked animations that loop to make a seventh overall work. Together, the serene scenes raise questions about migration, climate change, and human nature. The processions start and end with animals. Humans are interspersed to denote balance, cause, and effect. A long line of galloping white horses, symbolizing wisdom, power, and freedom as well as the artist’s native Iran, sets the tone. In other scenes, a man drags a whale, jellyfish and a manatee swim through a fluid environment, rhinos and birds meander through a field, and military figures on stilts drag cans and chairs behind them. A peaceful flight of herons ends the poetic series.

In addition, Khebrehzadeh made A Tree of Life in Blue, a twelve-by-eight-foot drawing, directly on a wall adjacent to the video installation. Her massive tree grows from its earth-bound central trunk and extends through its vast network of branches to reach across the picture plane and toward the sky. The ancient symbol of the tree of life represents vitality and continuity, which Khebrehzadeh connotes through her choice of a blue tone to evoke sky and water. Part of the artist’s series of tree drawings, this work connects to the living creatures shown in Seven Silent Songs. 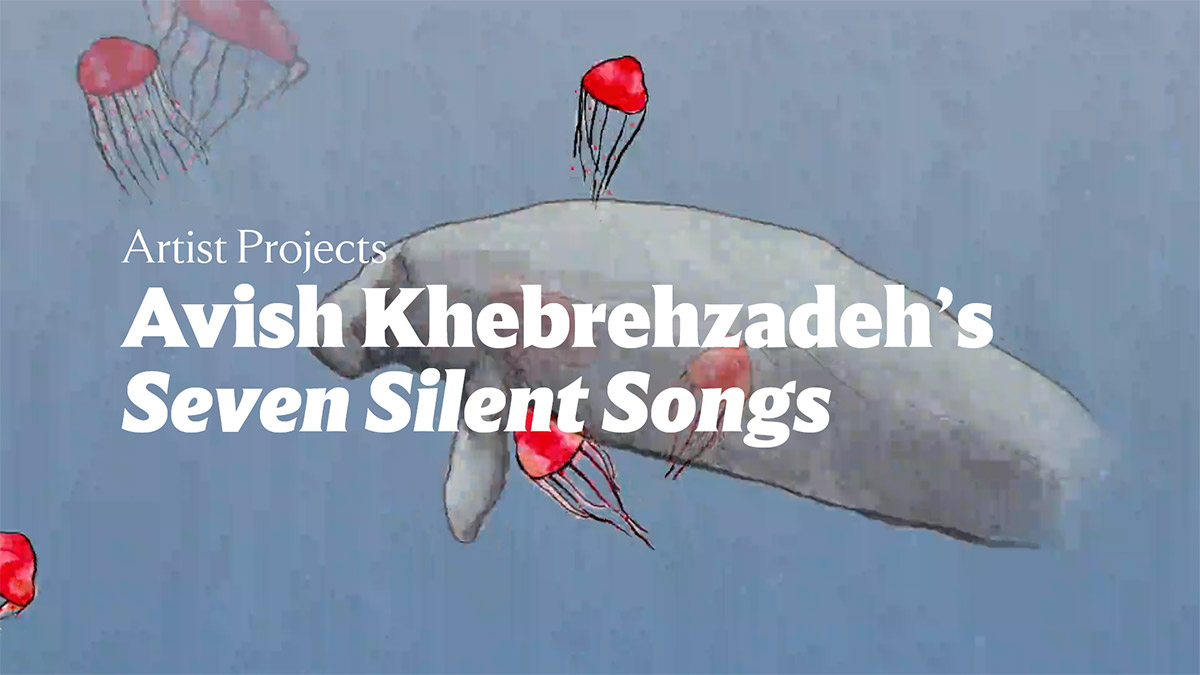 Avish Khebrehzadeh explains how hope and a connection to nature and animals are recurring themes in her work. 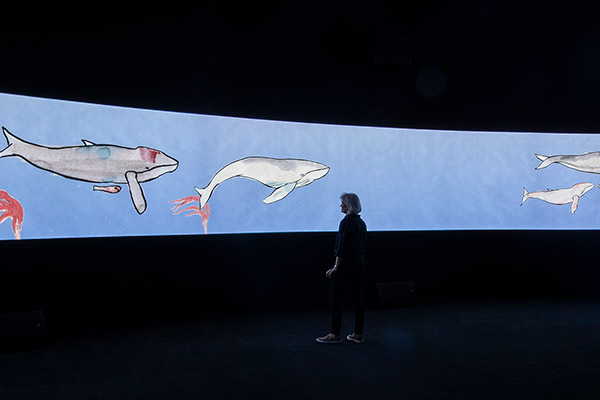 Avish Khebrehzadeh reveals her process for creating videos and her inspiration for drawing on a wall in the National Gallery. In her language-based artworks, Kay Rosen investigates how color, scale, material, composition, and typography affect meaning and structure. Her imaginative strategies challenge the way we see and interpret the texts we read. The artist created SORRY in response to the renovation of the East Building façade. She started with the word itself—an apology for inconvenience—and then isolated and repeated so. By combining the linguistic unit so with a comma and a hyphen, Rosen generates a range of expressions, from a half-hearted apology to a sincere one.

SORRY also poses bigger questions. Whose big voice might be expressing sorrow? The museum’s? The artist’s? A spiritual power’s? Who are the intended recipients of the apology? And sorry for what? The artist leaves that open to interpretation.

Rosen visited the National Gallery in early 2020 to familiarize herself with the site and to discuss the project’s initial requirements to create a text-based work that would provide wayfinding during the museum’s renovations. She considered the East Building’s location and role as a public museum, its visitors, and the rich context of current events. The artist designed all aspects of the text, including the color, spacing, font, and height, and selected the blue color for the temporary wall. A sign painter completed the artwork following Rosen’s instructions. 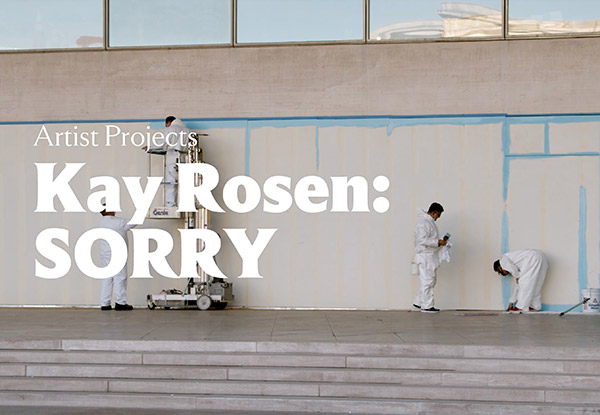 Who is saying "sorry"? Artist Kay Rosen considers the genesis and multiple meanings of SORRY. 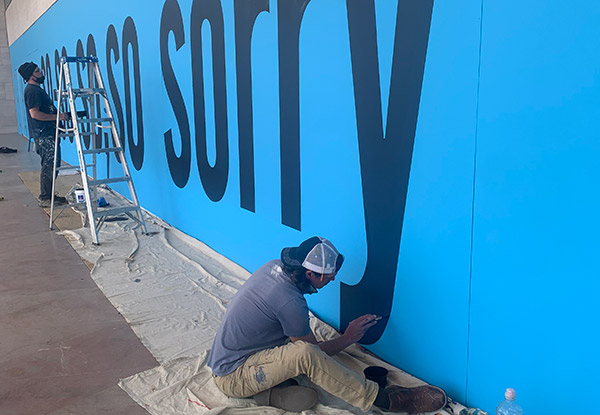 In this insightful interview, Kay Rosen talks about SORRY and evolving interpretations of her site-specific installation. Sarah Cain in her Los Angeles studio with My favorite season is the fall of the patriarchy in progress, 2020. Photo: Jeff McLane

Sarah Cain’s energetic installation jumped the bounds of a 45-foot-long painted canvas to integrate a variety of surfaces in the East Building’s Atrium. Extending onto the nearby protective sculpture enclosures and well covers, Cain’s painted elements surrounded and complemented the canvas to create a dynamic installation that encouraged movement and close looking. To the canvas, the artist applied sculptural elements of torn, cut, sewn, draped, and beaded sections, with additions of silver and gold leaf and paint rollers, inviting discovery and drawing from wide-ranging sources. The title of My favorite season is the fall of the patriarchy was lifted from a coffee mug. In the installation, Cain generated a flow of abstract moments between hard-edged shapes that traversed an atmospheric spray-painted backdrop to create a riotously colored work dynamically playing between painting and sculpture.

Initially, Cain had planned to paint directly on the temporary walls and enclosures on site. When the pandemic prevented her travel, she adapted her approach. After painting seven eight-by-seven-foot canvases in her Los Angeles studio, she then shipped them to the National Gallery, where they were installed across the long wall. The artist also oversaw (via video) National Gallery staff who painted three protective sculpture enclosures and three planter well covers. These structural elements surrounded and complemented the painting, which floated in an energized arena animated by Cain’s bright palette. 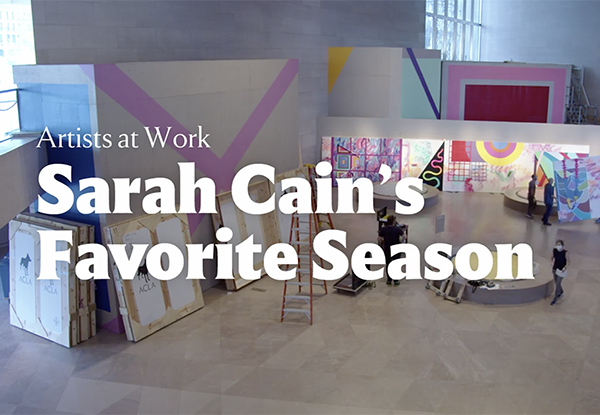 Sarah Cain talks about how fierce feminism and humor infuse My favorite season is the fall of the patriarchy.

Sarah Cain talks about making a site-responsive work for the National Gallery from thousands of miles away.

Organization
The installations are organized by Molly Donovan, curator of contemporary art, and Paige Rozanski, curatorial associate in the department of modern and contemporary art, both of the National Gallery of Art, Washington.

Sponsors
The installations were made possible by the Bernstein Family Foundation and The Tower Project of the National Gallery of Art, Washington. Additional in-kind support for the production of Seven Silent Songs was provided by Daniel Sallick and the Subject Matter Agency.

Passes
Admission is always free and passes are not required.