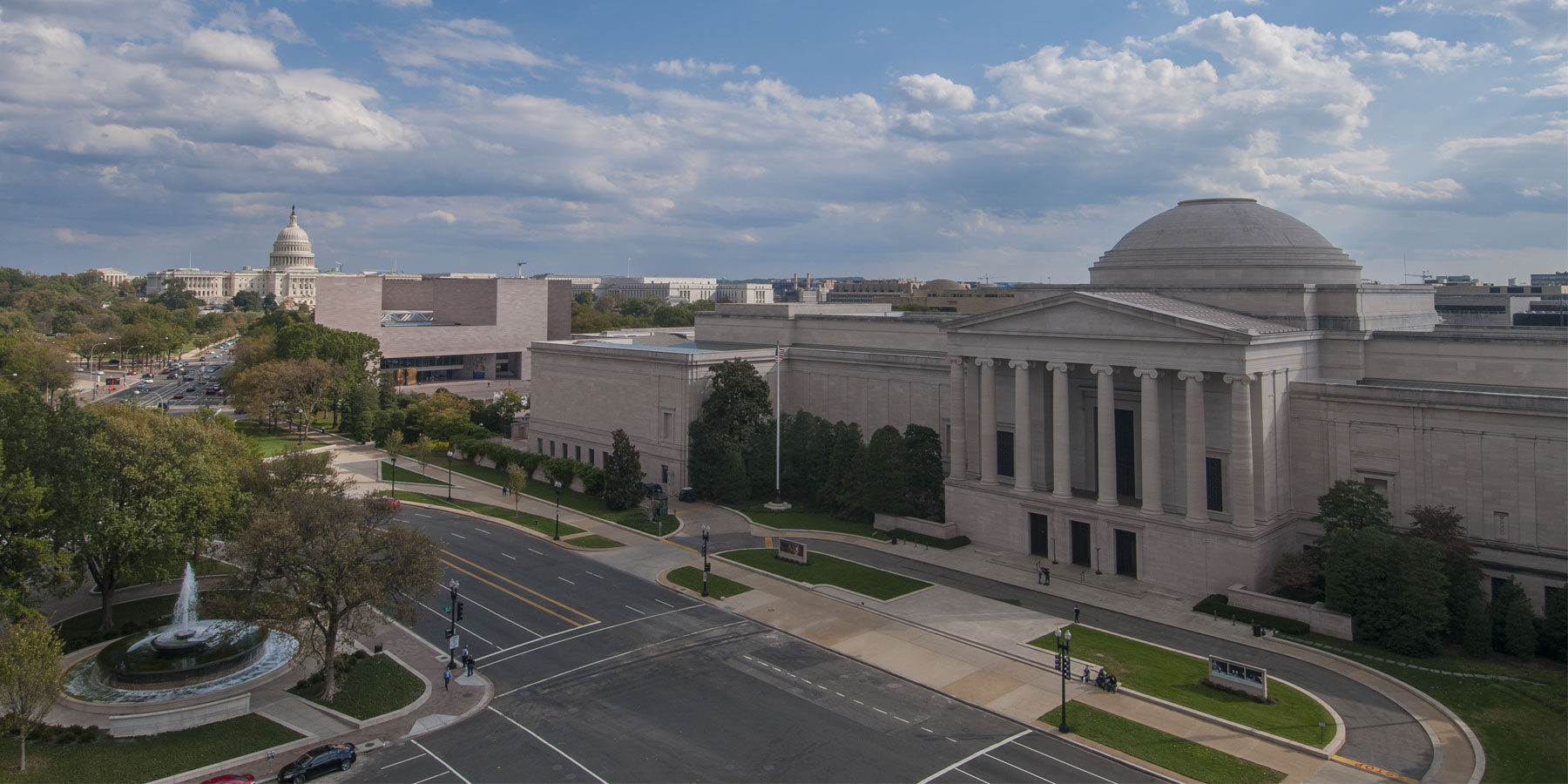 In 2016, the National Gallery of Art will commemorate the 75th anniversary of the opening of the museum with a variety of public programs, including concerts, films, educational programs, a new published history of the Gallery, and an on-site sketching program. The Andrew W. Mellon Memorial Fountain
Situated at the apex of the Federal Triangle complex in downtown Washington, DC, the Andrew W. Mellon Memorial Fountain will operate once again beginning March 17. The National Park Service transferred custody of the fountain and the surrounding triangular park to the National Gallery of Art in September 2015. Restoration and renovation of the fountain and site is made possible by a major grant from the Richard King Mellon Foundation.

The elegant three-tiered bronze fountain (which last operated in 2008) sits just north of the Gallery’s 6th Street entrance within a shallow granite pool and granite-paved plaza amid landscape plantings. Along with a carved granite bench dedicated to Andrew Mellon, the fountain was designed by Otto Eggers, who worked with John Russell Pope on the design of the West Building. It bears high-relief symbols of the zodiac designed by American sculptor Sidney Waugh. First opened in 1952, the fountain once more honors the Gallery’s founder.

75 Years/75 Stories
April 1–3
Gallery experts (curators, lecturers, conservators, and docents) will deliver 15-minute pop-up talks about the collection. Stories include the acquisition of Leonardo da Vinci’s Ginevra de’ Benci (c. 1474/1478)—code-named “the bird”—arriving under cover of night 1967 to take up its permanent home at the Gallery.

The pop-up talks will be scheduled in 30-minute intervals with two or three taking place at the same time in different areas of the Gallery. Several talks per day will be offered in accessible formats, including those with enhanced verbal description as well as talks interpreted into American Sign Language.

Concerts
March 17–20
In honor of the 75th anniversary, the Gallery will present four days of multiple performances by military ensembles from Washington, DC. Concerts are free of charge and open to the public on a first-come, first-seated basis.

"The President's Own" US Marine Chamber Orchestra
Friday, March 18 at 12:00 and 2:00
West Building, West Garden Court

Sketching Is Seeing
March 25–April 24
The Art Information Room, located in the West Building on the Mall entrance side, will be transformed into a "Sketching Is Seeing" orientation space. Building on the time-honored tradition of artists who sketch to explore ideas and the world around them, "Sketching Is Seeing" is a pilot program that offers an experience for visitors, providing inspiration to sketch from original works of art. This program is not about how well you can draw; rather, visitors will be encouraged to think about sketching as a tool to explore the museum—to slow down, look carefully, and connect with works of art.

Visitors are encouraged to stop by the Art Information Room to learn more about the program and to pick up materials, including a complimentary National Gallery of Art 75th-anniversary sketchbook and pencil. Members of the public can also share their creativity via Twitter or Instagram using #NGAsketch. The program is designed for all ages.

Faber-Castell USA is pleased to have provided all complimentary pencils for "Sketching Is Seeing" in commemoration of the 75th anniversary of the National Gallery of Art.

Gallery Talks
March–April
Free talks by museum educators and specialists focus on specific aspects of the Gallery's permanent collection or special exhibitions. These programs are geared to an adult audience.

Public Symposium
Celebrating a Milestone: 75 Years of the National Gallery of Art and the Samuel H. Kress Foundation
May 23 at 2:00
East Building Auditorium

Related Films
August–September
The Grandest Spaces: New Films on International Art Museums
Art museums have recently been a major topic in the cinema—their internal histories, staffs, behind-the-scenes workings, and occasional controversies. Portrayed in a variety of styles from documentary to narrative fiction to experimental, the National Gallery, London, the Louvre, the Hermitage, the Rijksmuseum, and the Prado are just a few of the institutions touched in this series of films by directors such as Frederick Wiseman, Alexander Sokurov, Jem Cohen, and Johannes Holzhausen.

#MyNGADC
The Gallery has launched a new social media campaign to commemorate the museum's 75th anniversary. Using #MyNGADC across Twitter and Instagram, the Gallery will encourage the online community to share their personal connections to the museum. Throughout 2016, the Gallery will share the stories of its collection and its artists, and using #MyNGADC, ask the public to answer the question: "What about the Gallery inspires you?"

Search for a specific object by title, artist, keyword, provenance, or exhibition history in our Collection Search.

See the works that are on view now in the Gallery.

Paul Mellon and the National Gallery of Art

An Enduring Legacy: Masterpieces from the Collection of Mr. and Mrs. Paul Mellon