Early modern guidebooks flourished in Rome in the 17th century. Written for visitors from abroad, guidebooks described and depicted many of Rome’s most important sites and traditions. Often pocket-sized for ease of reference, some were illustrated with woodcut prints. Along with maps, they are our earliest sources for the location, appearance, and decoration of important places associated with the Accademia di San Luca, as well as other sites around Rome mentioned in the documents that comprise the present database.

Here we present views of 12 guideboooks from National Gallery of Art Special Collections with historical context for the Accademia di San Luca. Specific views of pages or foldout illustrations with interactive annotation layers are given for locations and districts (rioni) mentioned in the Accademia di San Luca project’s archival documents. Annotations appear when viewed at full size.

Maps and guidebooks play a sympathetic role within the urban policies of the popes in the Urbe, especially those to whom the books were dedicated at the time of publication. The 12 illustrated 16th-, 17th-, and 18th-century guidebooks presented here come from the National Gallery of Art Library’s Special Collections and lead their readers and users on a Roman journey across time and space. The earliest in date layout descriptions of sites located in Rome and miracles said to have occurred there, like the genre of the Marvels of the City of Rome (Mirabilia Urbis Romae) evoked in De Roma prisca et noua (1523). Those later in date take the form of travel guides organized into itineraries (called guide romane) designed for a single day’s journey through one area of the city. These are often arranged according to a recurring format highlighting the three entities of the city: Roma antica, Roma sacra, and Roma moderna. 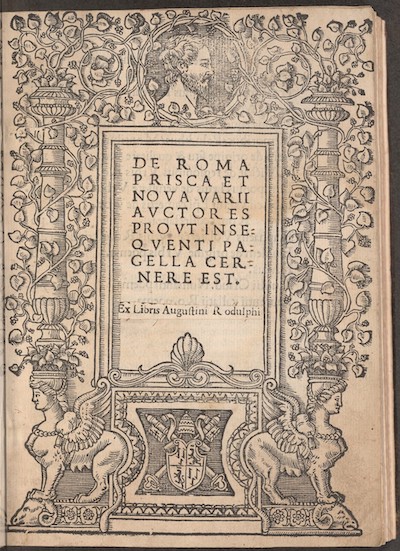 Francesco Albertini’s guidebook is the earliest in date selected from National Gallery of Art digital collections for the Accademia di San Luca project website. This popular guidebook is divided into three sections, the final section focusing on contemporary Rome as Albertini experienced it. 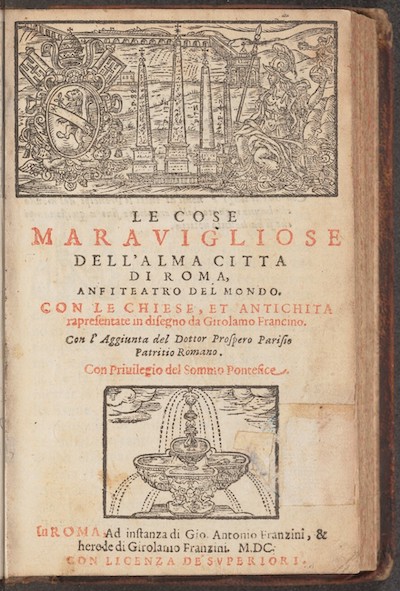 Published in the Jubilee year of 1600, this guidebook includes material by Prospero Parisio on the principal churches of Rome. The woodcut illustrations were used in other publications by Francini, together considered the first art-historical introduction to Rome of their kind. 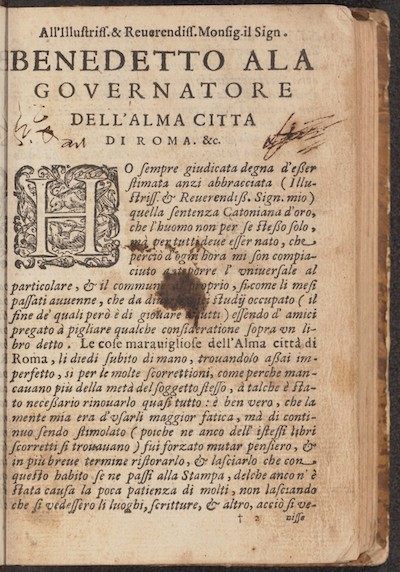 This guidebook is regarded as a landmark within the evolution of the genre. It bears witness to the increased interest in Rome's monuments, including an illustrated gallery of ancient and modern sculptures and sections on the interventions of Pope Sixtus V. 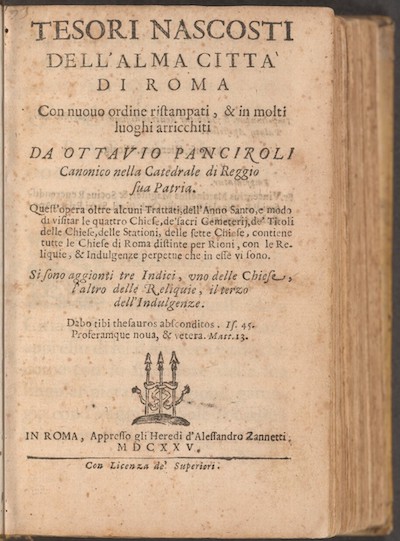 This guidebook, the second edition of a work originally published in 1600, gives an art-historical description of Roman monuments from antiquity to the early modern era. A section is dedicated to the Church of Santi Luca e Martina, home to the Accademia di San Luca since 1478. 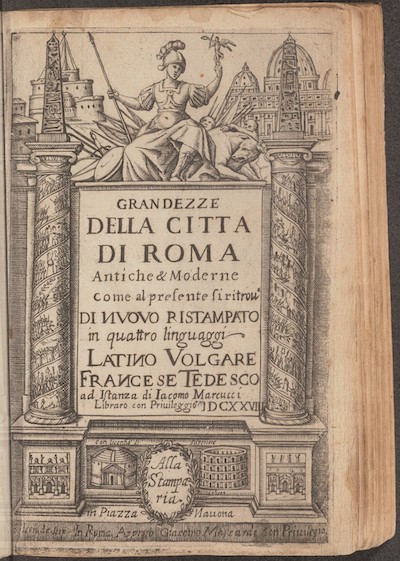 This guidebook targets an international audience, including an engraving of a tour guide (cicerone) identified as Giovanni Alto. It is written in four languages: Italian and French for the main descriptions of the sites, and Latin and German, which accompany the illustrations for each entry. 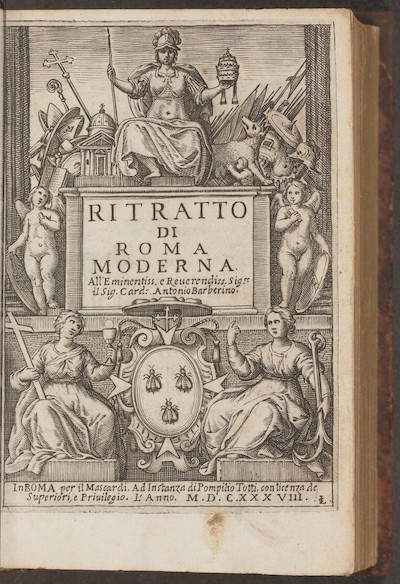 Pompilio Totti published guidebooks praising the urban and artistic accomplishments of the Popes. This guidebook is considered the most important book of Totti’s career as a publisher, engraver, antiquarian, and writer of topography of ancient and modern Rome. 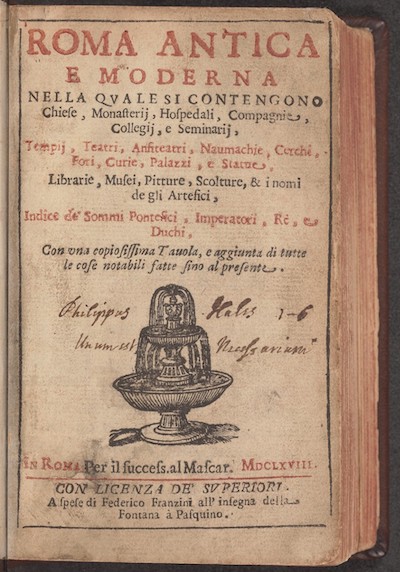 This guidebook is arranged in three sections according to the recurring format of the time, dedicated to the sette chiese (seven churches), descriptions of other significant churches by location, and finally the guida romana, a three-day tour of Rome highlighting important sites. 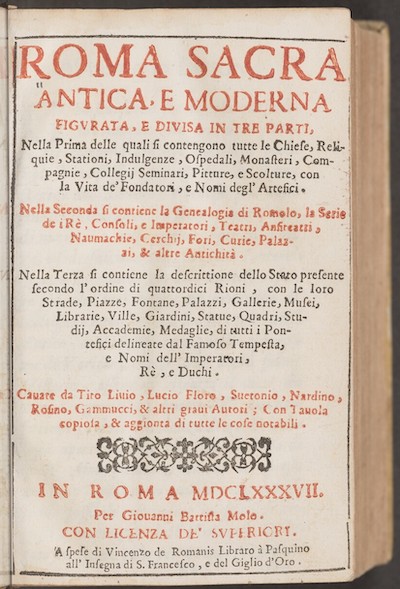 Rodrigo de Vega employs a common practice of reusing previous author’s descriptions of sites, such as entire texts from Panciroli (1625) and Franzini (1677). This illustrated guidebook is divided into three main thematic sections with a final chapter on academies in Rome, including the Academy of Painters and Sculptors at the Church of Santa Martina. 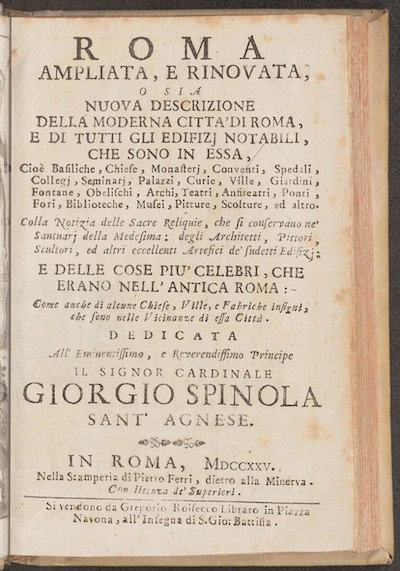 This volume is structured on a ten-day journey and leads the reader in an art-historical tour in which ancient Rome merges with modern Rome. In this text, different aspects of the city meld according to the order in which the sites present themselves to the visitor along the route. 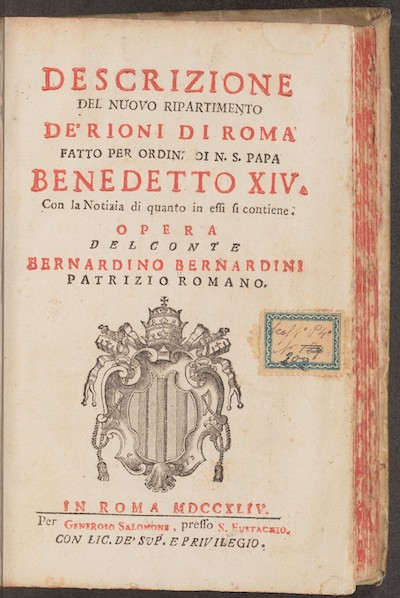 This guidebook describes Rome according to fourteen rioni (districts), as reformed in 1743 by Count Bernardino Bernardini, the author. The rioni and their history are described in great detail, along with their respective coats of arms, still visible today on the streets of Rome. 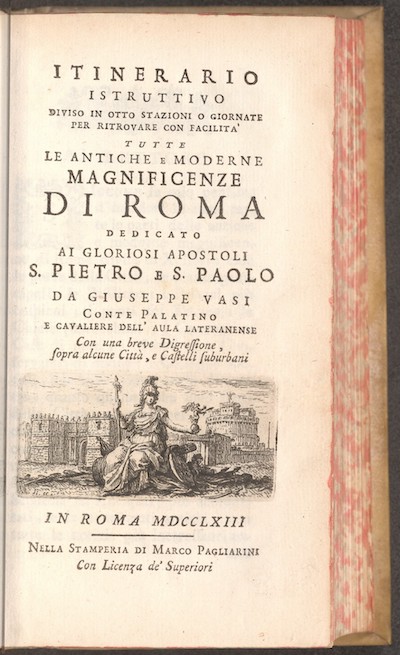 Giuseppe Vasi, a member of the Accademia di San Luca, was one of the most important engravers of the views of Rome. This is a pocket-sized volume with engravings and descriptions of monuments, formatted according to an eight-day route. 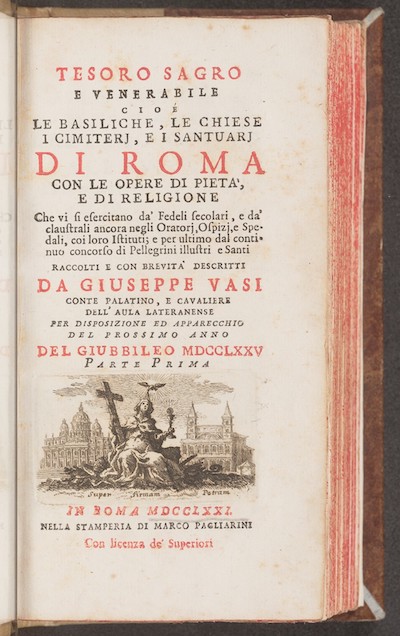 Like Vasi's Itinerario (1763), this two-volume guidebook is organized in an eight-day route, primarily focused on sacred history. Easily transportable, it was conceived to meet the needs of the pilgrims who would arrive in Rome for the Jubilee year of 1775.