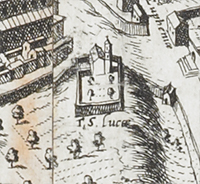 The small Church of San Luca, which once stood on the Esquiline Hill close to the papal basilica of Santa Maria Maggiore, was a medieval structure, likely dating to the thirteenth century. Although most modern accounts of the Università dei Pittori suggest that its activities at the church began in 1478, when the guild’s statuti were promulgated, alternative dates have been proposed. [1] By 1590, the starting point for the Accademia di San Luca project, the church had already been razed on the express orders of Pope Sixtus V not long after he had acceded to the pontifical throne in 1585. Nevertheless, a partial history emerges from a series of textual, documentary, and visual sources of later date that refer retrospectively to decisions and transactions that occurred at this site.

From all accounts, the church was of modest dimensions. The word chiesuola, used by Girolamo Francini to describe the building in his guidebook to Rome (1566), for example, implies a small structure. [2] It should be noted, however, that despite its size it was worthy of mention in guidebooks (not all churches were). The church was traditionally under the jurisdiction of the neighboring basilica of Santa Maria Maggiore. Work at the church continued for a few decades before its demolition, including pictorial decoration, most or all of which is now lost. A coeval source, Pompeo Ugonio’s manuscript notes on churches of Rome, mentions the church as having a single nave crowned with a barrel vault and adorned with paintings (among which, on the high altar, was the depiction of Saint Luke painting the Virgin, which some scholars contend is the work then attributed to Raphael). [3] Unfortunately, no information about the authors or subjects of the other paintings has come to light.

Sixteenth-century maps of Rome are invaluable sources for establishing the approximate location and appearance of the church. The maps of Mario Cartaro (1576) and Étienne Dupérac (1577) include the Church of San Luca along with its adjacent garden. Earlier maps, such as Leonardo Bufalini’s (1551) and Pirro Ligorio’s (1552), show churches in the area surrounding Santa Maria Maggiore, but since, on the one hand, many of these buildings lack any label on the map, and, on the other hand, period records mention at least one other church—that of Saint Albertus—in the immediate proximity of the Church of San Luca, it is difficult to identify with certainty either edifice on these maps. While Cartaro’s map features a frontal oblique view, Dupérac’s records the church with its facade oriented toward the piazza behind Santa Maria Maggiore. Both attest that the church had a campanile, though its location in relation to the main structure differs. Both maps present the church fronted by a sort of atrium, but only Dupérac’s rendering shows an enclosed parcel of land at the rear, which probably functioned as a garden.

The demolition of the church by Sixtus V has traditionally been understood as motivated by the pontiff’s need to aggrandize his nearby property, the Villa Peretti, in which he had been personally vested for some time before becoming pope. Intriguingly, Benedetto Mellini would state decades later, in the 1660s, in his unpublished guide to Rome, that remnants of the church were still visible at the time he wrote. [4] Information reiterated from a catalog by Michele Lonigo, whom Mellini quoted directly, suggested that the motive for the demolition of the church was rather to enlarge the piazza of the obelisk behind Santa Maria Maggiore. Similarly, contemporary sources, such as Flaminio Vacca (a sculptor who served as principe of the Accademia di San Luca), stated that the church had been demolished in order to create the piazza. As is well known, Sixtus V was deeply invested in renovating the urban fabric of this area of Rome as well as other major sites of the Eternal City, including Saint Peter’s and the Lateran complex. On the Esquiline Hill, in addition to his private dwelling and the obelisk, he commissioned the Sistine Chapel in Santa Maria Maggiore on the side of the basilica adjacent to the Villa Peretti. Camillo Massimo, the last owner of the villa, undertook intensive archival research into the surrounding area, before the destruction of the villa in the nineteenth century when the current Termini railway station was created. [5] He strove to find all the documents concerning the sale and purchase of land and properties related to the villa. Massimo sided with the early modern authors who considered the demolition of the Church of San Luca as part of the revamping of the rear Piazza Santa Maria Maggiore, where the pontiff installed the obelisk in 1587. Taking into account the various changes around the destroyed Church of San Luca and the later imprecision introduced by visual records such as maps, it may be more fruitful for research on this site to broaden the area assumed to have been occupied by the church.

[2] Francini 1566, 23. The same term is used in later editions of the book (see, for instance, the 1568 edition), but in the 1575 edition the word disappeared. The 1585 edition still mentions the church, but again without characterizing it as a “chiesuola.” Whether the elimination of the word in 1575 is an indication that the painters had enlarged the church needs to be corroborated by further documentation (which so far has not surfaced).