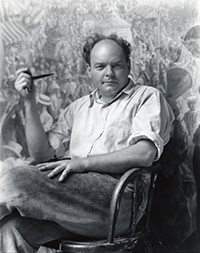 John Steuart Curry was one of the three major practitioners of American regionalist painting, along with and . Curry was born on a farm near Dunavant, Kansas, on November 14, 1897. His parents had traveled to Europe on their honeymoon, and his mother, Margaret, returned with prints of European masterworks that hung on the walls of the family home. She enrolled her son in art lessons at a young age, and his family supported his decision to drop out of high school in 1916 to study art. Curry worked for the Missouri Pacific Railroad and attended the Kansas City Art Institute for a month before moving to Chicago, where he studied at the Art Institute for two years. In 1918 he enrolled at Geneva College in Beaver Falls, Pennsylvania. Curry decided to pursue commercial illustration, and in 1919 he began to study with illustrator Harvey Dunn in Tenafly, New Jersey. From 1921 to 1926, Curry’s illustrations appeared in publications such as the Saturday Evening Post and Boy’s Life. In 1923, while living in New York City, he married Clara Derrick; shortly thereafter he bought a studio at Otter Ponds near the art colony in Westport, Connecticut. In 1926 Curry stopped producing illustrations and left for Paris, where he took classes in drawing with the Russian teacher Vasili Shukhaev and studied old master paintings at the Louvre.

Curry rejected both European academicism and modernism and believed that art should appeal to the common man. He began to represent midwestern American subjects, drawing on his experiences in Kansas. He returned to Westport in 1927, and his first major painting, Baptism in Kansas (Whitney Museum of American Art), was greeted with critical acclaim when exhibited at the 1928 Corcoran Gallery of Art biennial. Gertrude Vanderbilt Whitney took notice, provided Curry with financial support for the next two years, and later purchased Baptism for her newly established museum. In 1929 he completed Tornado Over Kansas (1929, Muskegon Museum of Art, Michigan), and in 1930 his first solo exhibition at the Whitney Studio Club was an immense success. By the early 1930s Curry was a firmly established painter of American regionalist scenes, and he found a tireless proponent of his work in Maynard Walker, owner of Ferargil Galleries, who represented his work for the next decade.

Beginning in April 1932, Curry spent about 10 weeks traveling with the Ringling Bros. and Barnum & Bailey Circus and making sketches. Following the death of his wife in July of that year, he moved to New York City, where he taught at the Cooper Union and the Art Students League. Curry married Kathleen Gould Shepherd in 1934 and returned to Westport. The following year the Federal Arts Project commissioned him to paint murals in the Department of Justice and the Department of the Interior buildings in Washington, DC. After an absence of nearly 20 years, Curry returned to the Midwest in 1936, where he was appointed artist-in-residence at the University of Wisconsin in Madison. He was commissioned by the state of Kansas to paint a series of murals for the state capitol in Topeka, including the controversial Tragic Prelude—John Brown (1937–1942), for which John Brown (1939, Metropolitan Museum of Art) is a large study. Public opposition, particularly to Curry’s depiction of a fiery John Brown standing between Union and Confederate forces, prevented the artist from completing the mural project. He refused to sign his work and left Kansas following the dispute. Among many professional distinctions and awards during the 1940s, Curry’s Wisconsin Landscape (1938–1939) won the purchase prize at the Metropolitan Museum of Art’s 1942–1943 Artists for Victory exhibition. Curry was elected an Academician of the National Academy of Design in 1943. On August 29, 1946, while preparing for a retrospective exhibition at the Milwaukee Art Institute, he died of a stroke in Madison at the age of 48.