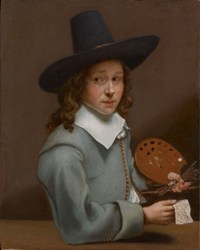 Aelbert Cuyp, one of the foremost Dutch land­scape painters of the seventeenth century, was born in Dordrecht in October of 1620. His father, Jacob Gerritsz Cuyp (1594–1652), was a successful por­trait painter in the city, and from him Aelbert received his earliest training, assisting his father by painting landscape backgrounds for por­trait commissions. It is uncertain whether Cuyp had also apprenticed with a landscape painter, but he soon abandoned his father’s style and subject matter and turned almost exclusively to landscapes and river­scapes, painting only an occasional portrait in his mature period. Arnold Houbraken, a native of Dordrecht, noted that Cuyp was a man of “irreproachable character” (onbesproken leven), and the surviving documents concern his active involvement in the Dutch Reformed Church and the city affairs of Dordrecht, rather than his activities as a painter. His marriage to Cornelia Boschman (1617–1689), the wealthy widow of Johan van den Corput (1609–1650), a representa­tive to the admiralty at Middelburg and a member of an important Dordrecht family, took place on July 30, 1658. After his marriage, Cuyp appears to have painted less frequently, probably owing to a combi­nation of his increased church activity and the ab­sence of financial pressures. He was buried in the Augustinian Church at Dordrecht on November 15, 1691.

Houbraken commented that only the artist’s own works were found in his home at the time of his death, proof that nature alone served as his model. The stylistic evolution of his oeuvre, however, dis­proves Houbraken’s conclusion. Cuyp’s early landscapes are clearly inspired by the compositional ap­proach and monochromatic palette of , but by the middle of the 1640s, the influence of the Utrecht painter be­comes apparent. Cuyp never lived in Utrecht, but probably his parents had met there while his father was studying, and Aelbert apparently visited the city regularly. By the mid-1640s Both had re­turned from Italy, bringing with him a new style employing the contre-jour effects associated with the work of . Cuyp soon recognized the possibilities of this new compositional approach and began to employ large foreground elements in his panoramic scenes, infusing them with a warm light and atmosphere. The occasional classical motif and Italianate lighting effects that are found in Cuyp’s mature works are not the result of a trip to Italy but of his association with Both, and perhaps other Italianate landscape painters he may have had contact with in Utrecht. Although no documents related to his travels exist, Cuyp’s drawn landscapes and townscapes do indicate that he traveled within the Netherlands and along the lower Rhine in Germany.

Cuyp seems to have worked for a number of important Dordrecht families. He was clearly an important artist in the city, although little is known about the organization or production of a workshop. Houbraken mentions only one pupil, Barent van Calraet (1649–1737), whose brother Abraham van Calraet (1642–1722), if not a pupil of Cuyp, was certainly a follower. It appears that many of Abraham van Calraet’s works were among those mistaken for au­tograph Cuyp paintings by the beginning of the twentieth century, when Hofstede de Groot included more than eight hundred entries in his catalogue raisonné of the master. By the late eighteenth century, Cuyp had many other followers and imitators, including Jacob van Strij (1756–1815).