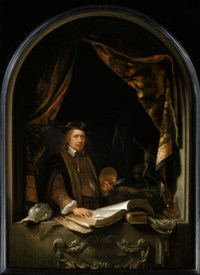 Gerrit Dou, considered the founder of the Dutch school of fijnschilderij, or fine painting, was born in Leiden on April 7, 1613, the son of Marytje Jansdr van Rosenburg and the glassmaker and engraver Douwe Jansz. According to Orlers, Dou received his first instruction, in the art of glass engraving, from his father. He was appren­ticed to the copper engraver Bartholomeus Dolen­do (c. 1571–c. 1629) for a year and a half, begin­ning in 1622 at the young age of nine, and then trained with the glass painter Pieter Couwenhorn (c. 1599–1654) for two years. Because he was a member of the glaziers’ guild from 1625 to 1627, it is tempting to make a connection between this youthful career and the smooth, shiny surface effects characteristic of his later panel paintings.

On February 14, 1628, Dou began his appren­ticeship with , which seems to have lasted until the master moved to Amsterdam some three or four years later. At the time he entered Rembrandt’s workshop Dou was not quite fifteen years old and Rembrandt was only twenty-one. Although there are no dated works by Dou from this period, a number of his pictures are so close in style to those of his teacher that they must have been painted at this time. Indeed, early works by Dou have at times been attributed to Rembrandt himself, a confusion stemming in part from the fact that Dou and Rembrandt shared subjects and models during these years.

After Rembrandt went to Amsterdam, Dou pro­duced ever more finely wrought, highly finished compositions with increasingly smooth, enamel-like surfaces. He also began to employ a range of cooler, paler colors in preference to the warm, darkish browns of his earlier works.

Dou painted a wide range of subjects, including genre scenes, history paintings, still lifes, portraits, and—unusual for a seventeenth-century Dutch painter—nudes. He also began painting candlelit scenes during the 1650s. His fame quite rightly rests, however, on the meticulously painted, small genre scenes that make up a large portion of his oeuvre. These typically depict one or two figures engaging in some kind of domestic activity, either in an in­terior or else looking out over a windowsill—a compositional device that Dou was chiefly responsible for popularizing. Many of these works are open to a considerable degree of symbolic interpretation, containing numerous, if sometimes ambiguous, vis­ual references to well-known contemporary proverbs or emblems.

Dou had remarkable success. From his own life­time until late in the nineteenth century, his work was considered one of the crowning achievements of Dutch art, and his pictures consistently fetched higher prices than those of Rembrandt. By 1648, when he is recorded as one of the founder-members of the Leiden Saint Luke’s Guild, his pictures commanded some of the highest prices of their day, and he had already gained a remarkable international reputation. Pieter Spiering, the agent in The Hague of Queen Christina of Sweden, apparently paid 1,000 guilders per year to secure for his queen right of first refusal of whatever Dou produced. In 1660 the States General of the Netherlands included several paintings by Dou amongst their gifts to Charles II of England on the occasion of his restoration to the throne. He subsequently invited Dou to travel to England and work at the royal court, an invitation the artist did not accept.

Indeed, it seems that Dou hardly ever left his native Leiden, where his work was as appreciated as it was in the royal courts of Europe. In 1641 the mayor of Leiden, Jan Jansz Orlers, wrote admiringly of Dou’s technique in his general description of the city, Beschrijvinge der Stadt Leyden, and in 1665 a local collector, Johan de Bye, rented a room in which he exhibited twenty-seven of the artist’s paintings, one of the first recorded occasions of an exhibition de­voted to the works of a single painter.

Dou’s enduring fame rests on the fascination for the products of extremely painstaking and skillful labor. The time that went into the cre­ation of Dou’s minutely detailed works is legendary: one anecdote relates how, when complimented on the patience with which he had painted a tiny broom the size of a fingernail, he replied that he still had three days’ work to do on it. He is also said to have spent five days on the underpainting of a single hand in a portrait. Since he charged six guilders an hour for his services as a portrait painter, it is hardly surprising that these do not constitute a large pro­portion of his oeuvre.