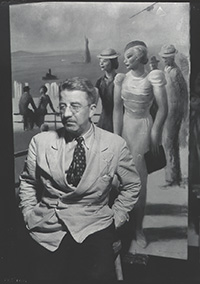 Guy Pène du Bois was a noted art critic as well as a painter of pointed, sometimes witty, scenes of modern social interactions. Pène du Bois was born in Brooklyn, New York, on January 4, 1884. His father, Henri Pène du Bois, a journalist and writer of Louisiana Creole heritage, passed down his admiration of French language and culture to his son. Pène du Bois attended the New York School of Art from 1899 to 1905, where he studied first with and later . Pène du Bois’s fellow pupils included , , and . Hopper and Pène du Bois remained close friends throughout their careers. In 1905 he went to Paris with his father and briefly studied at the Academie Colarossi and took lessons from . He first exhibited at the Paris Salon in 1905. Pène Du Bois’s work reflects a close observation of modern Parisian life in subjects such as men and women interacting in public spaces like cafés. He drew inspiration from contemporary French artists like and . Du Bois and his father were forced to return to New York in 1906 after the elder Pène du Bois fell ill, but he died before they arrived.

Following the death of his father, Pène du Bois needed to support himself in New York. He became a police reporter, and later an art and music critic, for the New York American until 1912. From 1913 to 1914 he was an assistant to Royal Cortissoz, art critic of the New York Tribune, and in 1913 he became editor of Arts and Decoration, a post he held for seven years. He joined the Society of Independent Artists and the Association of American Painters and Sculptors and helped organize the Armory Show in 1913. Six of his paintings were included in the exhibition. During the mid-1910s Gertrude Vanderbilt Whitney began to collect his work, and Pène du Bois had his first solo exhibition at the Whitney Studio Club in 1918. Chester Dale also became a patron of Pène du Bois at this time, ultimately owning 25 paintings by the artist. In 1911 Pène du Bois married Florence Sherman Duncan, who provided financial stability through her clothing design business. Between 1914 and 1917 Pène du Bois and his family lived in Nutley, New Jersey, and from 1921 to 1924 in Westport, Connecticut.

In 1924 Pène du Bois moved to Paris. Supported by his New York dealer, Kraushaar Galleries, Pène du Bois stayed until 1930. There he devoted himself entirely to painting and refined his highly distinctive device of representing the human figure as a tubular form. Pène du Bois drew on the fin de siècle tradition exemplified by painters like Jean-Louis Forain, creating satirical works of bourgeois life during the American Jazz Age and its aftermath. He was a social observer, drawing his subjects from all classes of society. Many of his images seem like quiet pauses in unfolding dramas, lending them an air of tension and mystery.

After returning to the United States, Pène du Bois taught at his own art school in 1932, at the Art Students League in 1935, and at a summer art school in Amagansett, New York, in 1938. From 1936 to 1943 he worked for the Works Progress Administration painting murals for post offices in Rye and Saratoga Springs, New York, and in Weymouth, Massachusetts. Pène du Bois remained a perceptive critic and writer who championed innovative American art; in addition to publishing numerous articles in art magazines, he wrote an autobiography, Artists Say the Silliest Things (1940), and monographs on , Edward Hopper, , and for the Whitney Museum's American Artists Series. He died of cancer in Boston on July 18, 1958.