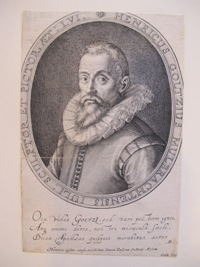 Hendrick Goltzius, who was born in the Lower Rhine region of Germany, came from a long line of artists: his great-grandfather and grandfather were both painters in Venlo, and his father, Jan Goltz II (1534–after 1609), was a glass painter in Duisburg. The art theorist , who is the primary source of information about Goltzius and his work, notes that Goltzius was apprenticed to the printmaker and moved with his teacher from Xanten to Haarlem shortly after 1576. Goltzius married the widow Margaretha Jansdr in 1579. Margaretha came into the marriage with an eight-year-old son, Jacob Matham (1571–1631), who later studied with Goltzius and became a printmaker in his own right.

Goltzius was renowned as a graphic artist and produced prints and drawings using a variety of techniques, including metalpoint, brush and ink, and chalk. He was also a pioneer in the art of “pen-painting,” a technique he invented in which pen is used directly on canvas to mimic the look of a print. Goltzius impressed his contemporaries with these large, monochromatic works, which were admired for their high degree of detail and innovative process of execution.

Goltzius’ early works from the late 1580s reflect the influence of international mannerism, a style characterized by long, attenuated figures and highly dynamic compositions, promulgated by the artist , court painter to Emperor Rudolf II in Prague. Goltzius made engravings after Spranger’s drawings, which Van Mander brought to him from Prague. In October of 1590, Goltzius traveled to Italy, purportedly to recover from an illness, and he stayed there for six months. While in Rome, Goltzius studied antique sculpture and, as a consequence, his art became much more classicizing in style and grounded in the study of the human body.

In about 1600 Goltzius added painting to his already long list of talents. It has been speculated that the artist’s failing eyesight played a part in his decision to begin painting, which did not require the precision of printmaking. It is possible, however, that his decision was prompted by his friend and biographer Van Mander, for whom painting was the highest form of art.[1] In 1612 Goltzius was visited by , who had come to the Haarlem master in search of a reproductive engraver to make prints after his paintings. Rubens hired , one of Goltzius’ assistants, to fulfill this role. Rubens’ visit had an important impact on Goltzius’ painting style, which subsequently became more assured and classical in character.