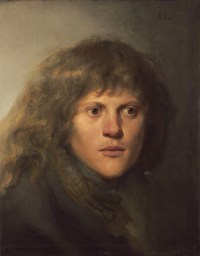 Jan Lievens is among the most fascinating and enigmatic Dutch artists of the seventeenth century. Daring and innovative as a painter, draughtsman, and printmaker, he created character studies, genre scenes, landscapes, formal portraits, and religious and allegorical images that were widely praised and highly valued during his lifetime.

Lievens, whose father, Lieven Hendrickcz, was a skilled embroiderer, began his career in Leiden in the early to mid-1620s. Lievens’ initial training, at the age of eight, was with the Leiden artist Joris van Schooten (c. 1587–1653). Between 1618 and 1620 Lievens was in Amsterdam, where he trained with the history painter Pieter Lastman (1583–1633). This child prodigy was said to have “astounded” Leiden art lovers with the skillful paintings he had created by the age of twelve. By the early 1620s, Lastman’s influence on Lievens had been largely overshadowed by that of the Utrecht Caravaggisti, particularly , , and . Much in the manner of these artists, Lievens executed his works with thick impastos, brought his figures close to the picture plane, and dramatized his scenes with strong contrasts of light and dark.

During the late 1620s Lievens and his Leiden colleague had a close, symbiotic relationship that manifested both in the style and the subject matter of their works. They appear as models in each other’s paintings and may have shared a studio. By the early 1630s their manners became so similar that even contemporaries were unsure of the correct attributions of their paintings. Constantijn Huygens, the secretary to Frederik Hendrik, the Prince of Orange, recognized their precocious abilities and introduced the artists to the Dutch court in The Hague. Huygens probably also introduced Lievens to the exiled king and queen of Bohemia, Frederik and Elizabeth, the so-called Winter King and Queen. Elizabeth, the sister of Charles I, king of England, commissioned Lievens to paint portraits of her oldest son.

Lievens, who aspired to be an internationally renowned court artist, left Leiden for London to paint at the court of Charles I. There he came under the influence of , whom he had previously met in The Hague. Lievens remained in London until 1635, when he moved to Antwerp. No paintings and only a few drawings and prints are known from this period of his career.

In Antwerp Lievens entered into an artistic community that included the genre painters and , and the still-life painter . Lievens joined the Saint Luke’s Guild, and took on his first student. In 1638 he married Susanna Colijns de Nole, the daughter of a prominent sculptor, and probably converted to Catholicism. The couple’s only surviving son, Jan Andrea, would eventually become an artist. In Antwerp Lievens painted genre scenes, head studies, landscapes, and large-scale religious subjects, varying his style according to the subject matter. For example, he painted in a rough manner inspired by Brouwer when making genre scenes, adapted Van Dyck’s elegant style for his religious themes, and emulated the expressive brushwork of when painting landscapes.

In 1644 the artist moved to Amsterdam, and shortly thereafter his wife died. In 1648 he married Cornelia de Bray, who was also a Catholic. The couple had six children who survived infancy. Lievens’ international style of painting was greatly admired in the northern Netherlands, and he received major commissions for the town hall in Amsterdam and the States General in The Hague. He also painted, once again, for the House of Orange, executing an allegorical painting for the Huis ten Bosch, the country house of Amalia van Solms, widow of Prince Frederik Hendrik. Lievens also painted for Van Solms’ daughter, Louise Henriette, and her husband, the Elector of Brandenburg, at their country house near Berlin.

Lievens’ services as a portraitist were sought after by Dutch political, cultural, and business leaders, and his landscape paintings and drawings were also highly regarded. The invasion of the Netherlands in 1672 by French and German forces, however, adversely affected his career. Many of his financial problems, though, were partly of his own making. He had a difficult personality, which complicated relationships with both family and patrons, and he had lifelong problems managing his affairs. He died in poverty in June 1674 and was buried in the Nieuwe Kerk in Amsterdam.

Lievens’ posthumous reputation has never risen to a level commensurate with that during his own lifetime or with the quality of his individual works. This phenomenon is partly explained by the peripatetic character of his career, by the widely ranging styles in which he worked, and by the fact that many of his best paintings have been wrongly attributed to other artists, including Rembrandt.