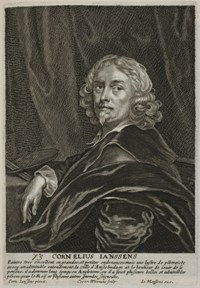 Born in London to immigrant parents of Flemish-German descent, Cornelis Jonson van Ceulen was baptized in the Dutch Church at Austin Friars on October 14, 1593. Jonson’s family, originally from Cologne, had left Antwerp for London around 1568, probably to escape religious persecution from the Duke of Alva. No records indicate where Jonson received his training, but his parents, Cornelis Jonson and Jane Le Grand, may have sent him to the Netherlands for an apprenticeship as a young boy. He was, nonetheless, back in London by 1619 when he attended the baptism of a nephew. On July 16, 1622, he married Elizabeth Beck (who was of Dutch descent); the couple had two sons, James, born in 1623, and Cornelis the Younger, born in 1634. The family lived in the London parish of Saint Anne, Blackfriars, an area popular with immigrant craftsmen, until 1643 when they departed for Middelburg in the Netherlands, a result of both the outbreak of the English Civil War and the subsequent decline in court patronage.[1]

Jonson’s career in London was marked by his success as a portraitist for the English aristocracy. In the 1620s and 1630s he painted elegant portraits of varying sizes—from miniatures and preparatory works for prints to full-length and group portraits—often set behind trompe l’oeil frames. Although the identities of many of his sitters have been lost, Jonson himself was the first British-born artist to consistently sign and date his works, using the signature “C.J. fecit.”[2] His style slowly developed during his years in England under the influence of the Flemish portraitist , who also served as a court painter for Charles I, and , who arrived in London in 1632. Jonson’s highest honor came that very same year when he was appointed one of the official court painters for Charles I, becoming “his Majesty’s servant in the quality of Picture drawer.”[3]

After his departure from England, Jonson remained active as an artist in the Netherlands. He joined the Saint Luke’s Guild in Middelburg shortly after his arrival and continued to produce portraits throughout the 1640s and early 1650s, receiving commissions from patrons in The Hague and Amsterdam as well as maintaining some English contacts. In 1652 he moved to Utrecht where he would remain until his death in August 1661.

[1] Mary Edmond, “Limners and Picturemakers: New Light on the Lives of Miniaturists and Large-Scale Portrait Painters Working in London in the Sixteenth and Seventeenth Centuries,” Walpole Society 47 (1978–1980): 89; and Karen Hearn, “The English Career of Cornelis Johnson,” Leids Kunsthistorisch Jaarboek 13 (2003): 113–114.

1978
Edmond, M. "Limners and Picturemakers: New Light on the Lives of Miniaturists and Large-scale Portrait painters Working in London in the Sixteenth and Seventeenth-Centuries." Walpole Society 47 (1978-1980): 60-242.