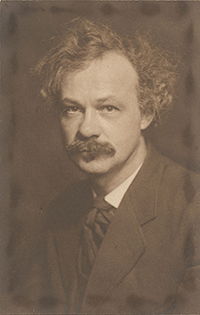 Jerome Myers was born on March 20, 1867, in Petersburg, Virginia. Jerome’s itinerant father was absent for long stretches of time, and his family moved frequently in his early years before settling in Trenton, New Jersey. At age 11 Myers left school to help support his invalid mother and four siblings. It was around this time that he took up sketching and painting. Three years and a series of jobs later, Myers and his family moved to Baltimore. There he and an elder brother eventually set up a sign painting business, putting the younger Myers’s burgeoning artistic skills to work. In his autobiography Artist in Manhattan (1940) he wrote of the enterprise: “For a year or so, I had my shingle out and we flourished. Incidentally, I remember contracting lead poisoning at this time. Now I know that the lead finally left my system, but the paint remained.”[1]

In 1886 the family moved to New York City, where Myers found work in the theater as a scene painter. He began his formal art studies at Cooper Union in 1867. The following year Myers enrolled at the Art Students League, where his teachers included and . Myers chafed against the conservative, academic nature of his schooling and his instructors’ disapproval of his growing interest in making city life (particularly that of New York) the subject of his work. Nevertheless Myers continued studying at the Art Students League for eight years, working as a newspaper illustrator for part of that time. In 1896 he used his scant savings to travel to Paris and complete his academic training. Myers saw many great masterworks and met the city’s young artists but left assured that only New York could be his lifelong subject.

Throughout the 1890s Myers’s drawings, pastels, watercolors, and etchings captured the vibrant, chaotic life of New York’s working-class neighborhoods and their inhabitants, particularly the Lower East Side with its recent influx of immigrants. Like other urban realists, including and , these works and his later paintings offer a positive view of the urban poor and their communities. Perhaps because of his own childhood experiences with poverty and an itinerant existence, Myers’s urban scenes are particularly sympathetic, even sentimental. He later wrote of the city’s slums: “Others saw ugliness and degradation there, I saw poetry and beauty.” Despite his empathetic approach, Myers was not engaged in social reform issues.

Sometime around 1902 Myers met William Macbeth, owner of the Macbeth Gallery, who encouraged him to focus more on oil painting. Myers subsequently showed his work at the Macbeth Gallery in 1902 and 1903 before his first solo show there in 1908. In 1905 Jerome married the artist Ethel Myers, who had studied at the New York School of Art with Robert Henri and . Ethel was known for her small figures in bronze and her watercolors. In 1911, Myers joined a small group of fellow artists in founding the Association of American Painters and Sculptors (AAPS), which aimed to promote contemporary artists through non-juried exhibitions. With as its president, the AAPS organized the International Exhibition of Modern Art, a landmark show that included representative works from avant-garde artistic groups in America and Europe. Popularly known as the Armory Show, the exhibition opened in New York on February 17, 1913, and, in addition to American contemporary art, introduced cubism, fauvism, expressionism, and other forms of European modernism to the wider public in the United States.

Myers exhibited his work nationally throughout his career (mostly paintings but also a number of etchings) and received a number of awards from institutions including the National Academy of Design and the Carnegie Institute. In 1919 he was elected an associate member of the prestigious National Academy of Design, becoming a full member in 1928. Myers passed away in New York City in 1940.