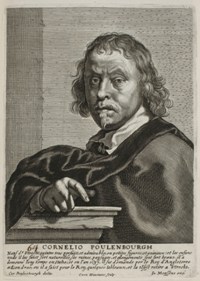 Cornelis van Poelenburch, one of the most important of the first generation of Dutch Italianates, was born in Utrecht in the winter of 1594–1595.[1] His father, Simon van Poelenburch (d. 1596), was a canon of the Utrecht cathedral chapter. By 1610 Poelenburch was apprenticed to , a leading Utrecht mannerist.[2] He was also influenced by the Amsterdam Pre-Rembrandtists, Jan (1581–1631) and Jacob Pynas (c. 1592–after 1650). After completing his training, he traveled to Rome, where he is first recorded in 1617. In Rome he was inspired by the paintings of fellow northerners and , as well as by and antique sculpture.

Poelenburch’s small-scale paintings of arcadian, biblical, or mythological subjects, which featured figures in an Italianate landscape, often with Roman ruins, were much admired by Cosimo II de’ Medici, the Grand Duke of Tuscany, and in 1620–1621 Poelenburch lived in Florence and worked for the duke. After returning to Rome, Poelenburch helped found the Schildersbent, an unofficial group of Netherlandish artists in Rome whose members were known as Bentveughels (birds of a feather). His fellow members gave him the nickname “Satiro” (Satyr).

In the mid-1620s Poelenburch returned to Utrecht, where he married Jacomina van Steenre two years later. He had an extremely successful career, and his small religious and mythological scenes were avidly sought after by both courtly patrons and private collectors in Utrecht and beyond. The inventory of the Utrecht collector Willem Vincent, Baron van Wittenhorst (d. 1674), for example, indicates that he owned at least fifty-five of the master’s paintings.[3] Poelenburch served as hoofdman and deken of the local painters’ society, and often collaborated with other artists, including .

In the spring of 1627 the States of Utrecht acquired one of Poelenburch’s paintings and presented it to the Prince of Orange, Frederik Hendrik, as a gift for his consort Amalia van Solms. Poelenburch subsequently worked in The Hague, both for the court of the Prince of Orange and for the court of the exiled King and Queen of Bohemia, Frederik and Elizabeth.[4] In 1637 Poelenburch was appointed court painter to King Charles I, and he lived in London between 1637 and 1641. After he returned to Utrecht he was quite wealthy and acquired a number of properties, which allowed him to develop a large workshop. Among his many pupils was Johan van Haensbergen (1642–1705).

[4] The States of Utrecht purchased Poelenburch’s Banquet of the Gods on Earth now in Anhaltische Gemäldegalerie Schloss Georgium, Dessau, inv. no. 801.