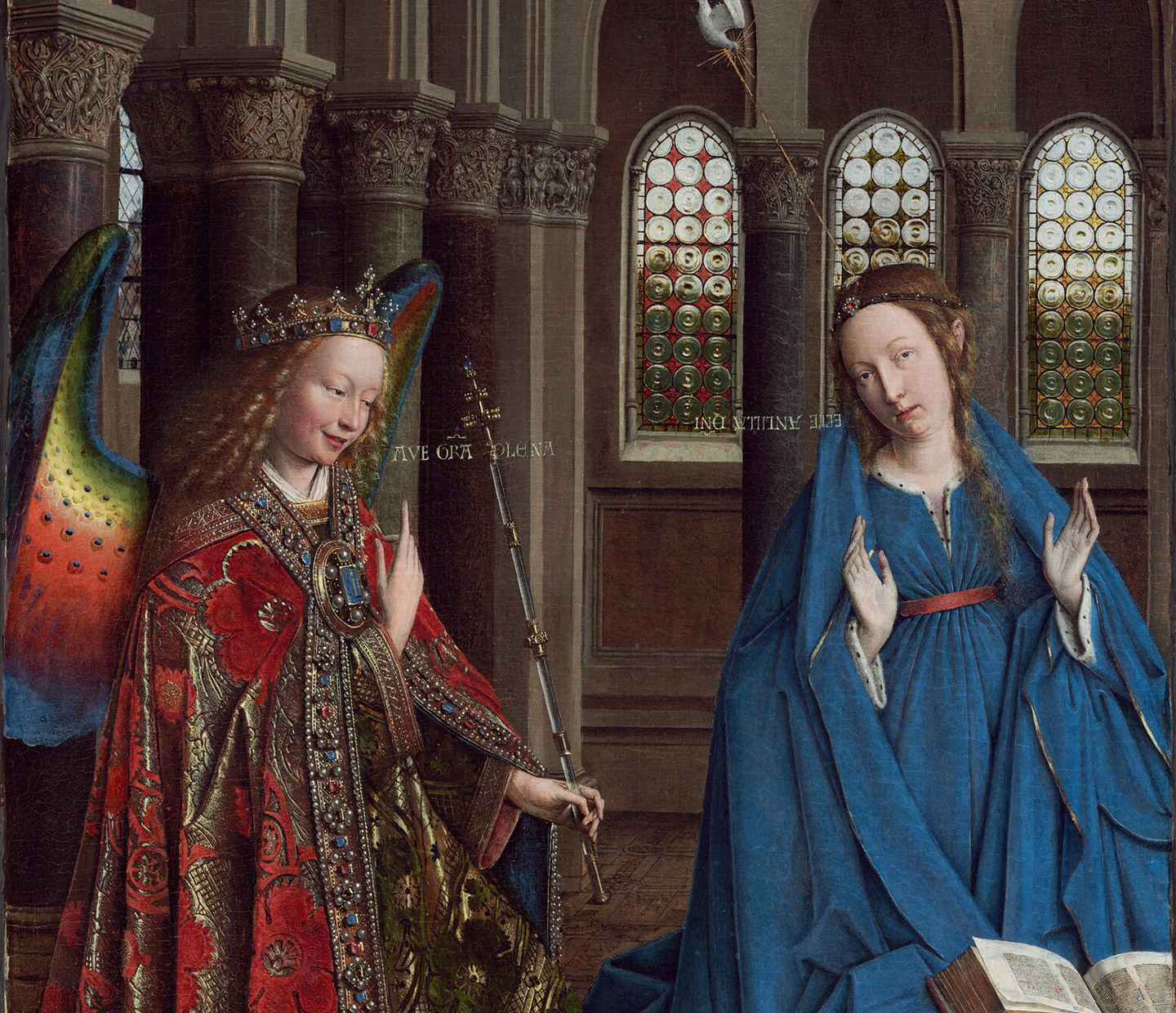 The archangel Gabriel delivers a salutation from God: Ave gratia plena [hail, full of Grace]. His words flow out in gold letters. Mary draws back with surprise and modesty. She has been chosen to bear the son of God. As she speaks her acceptance—ecce ancilla domini [behold, the handmaiden of the Lord], written in reverse for God to see—the dove of the holy spirit descends to her on rays of light.

For Christian believers this is the very instant of the Incarnation, when word is made flesh and Jesus is given earthly life and when God’s plan for salvation is set in motion. It is a moment of abiding mystery that  makes concrete. By recreating the material world with specificity and precision, he gives us a tangible sense that the painted world is continuous with our own. Astonishing detail, at the limits of human vision, brings the  into the viewer’s present.

In fact, many who saw this painting would have witnessed the scene, as it was reenacted by choirboys in church each December. Van Eyck’s painting closely parallels a performance that was part of the Golden Mass. Such performances created a sense of “reality” in the same way that Van Eyck’s minute style did, to serve the needs of the devotio moderna. This widespread religious movement, which arose in the Low Countries at the end of the Middle Ages, promoted an empathetic piety that placed great value on a worshipper’s direct, personal identification with the lives and the joys and sufferings of holy figures.

For all its highly convincing evocation of the material world, however, virtually every element in Van Eyck’s painting carries complex levels of meaning. His elaborate symbolism, which would have been fully grasped only by a small, well-educated elite, centers on the implications of the Annunciation as the transition to the new era of Grace brought about by Christ’s human birth and sacrifice.

We do not know who commissioned this Annunciation or where it was originally installed. It must have been the left-hand section of a three-part altarpiece, whose other panels are now lost. Early accounts of the painting place it in Dijon, where Van Eyck served the dukes of Burgundy not only as a painter but also as a “varlet de chambre” (chamberlain) who undertook secret diplomatic mission for Philip the Good, including negotiations for his marriage. Reflected in the mirror is the painter, Van Eyck himself, observing the scene. Arnolfini may be raising his hand in greeting to the men entering the room.

Jan van Eyck deserves to be counted among the greatest painters of any era. His reputation, established during his lifetime, has continued undiminished to the present day. His close observation and meticulous technique captured the physical world with a degree of realism that has never been surpassed. But this naturalism was not an end in itself: instead, it mirrors and explicates, through layers of complex symbolism, the mysteries of divine creation.

It is believed that Van Eyck was born in Maaseik (now in Belgium), probably no later than about 1390 as he is named in a document of 1422 as the varlet de chambre et peintre (chamberlain and painter) of John of Bavaria, Count of Holland. After the count’s death in 1425, he took up the same position in the court of Philip the Good, Duke of Burgundy, the most powerful ruler and greatest patron of the arts in the Low Countries. Van Eyck worked for the duke for the rest of his life, not only serving as court artist but also in diplomatic roles.

Van Eyck’s precise style was made possible by his mastery of oil painting techniques, but his training as an artist remains obscure. It has been suggested that he was influenced by, or perhaps even produced, manuscript illuminations. He must have seen paintings by Robert Campin, whose bold realism and use of symbolism he adopted. But Van Eyck’s paintings are more elegant than Campin’s homey scenes, his figures more graceful, and his symbolic programs more complex. The sophistication of Van Eyck’s iconography, which demonstrates understanding of complicated theological arguments, suggests that he had received a high level of education. This and his status at the court are reflected also in the fact that Van Eyck signed his paintings—the first Netherlandish artist to do so—and adopted a personal motto, Als ich chan (as best I can), in the manner of the nobility.

The Precision of Van Eyck's Eye and Brush These details are highly magnified. Even so, it is hard to imagine that the threads are not really gold, but only stokes of yellow pigment, the jewels and pearls only paint. Van Eyck was one of the first artists to master the technique of oil painting. The layering of light-trapping oil glazes allowed him to capture these surfaces and textures—light streaming through glass, plush velvet, and a tiny bookpin. The Dove of the Holy Spirit descending towards the Virgin as it is typically portrayed in scenes of the Annunciation.

A medieval account from the Church of St. Jacob in Bruges described the Golden Mass. It was performed on Ember Wednesday during Advent.

Two young choirboys—with “sweet high voices”—don costumes in the sacristy. Gabriel carries a scepter. After the singing of matins, they take places near the main altar. Gabriel stands and Mary kneels as the deacon begins the Gospel reading from Luke:  “At this time, God sent the angel Gabriel to a city of Galilee called Nazareth, where a virgin dwelt, betrothed to a man of David’s lineage; his name was Joseph and the virgin’s name was Mary. Into her presence the angel came and said....”

At this point the choirboys pick up the narrative. Gabriel genuflects three times, then sings: ave gratia plena: domunus tecum: benedicta tu in mulieribus.... [Hail, full of Grace, most favored among women, the Lord is with you....] He calms Mary’s initial bewilderment and explains that she will conceive and bear a son. Mary asks, “how is this possible as I have no knowledge of men?” As a dove is lowered from the choir, the angel explains: “the Holy Spirit will come upon thee, and the power of the Most High will overshadow thee. Thus this holy offspring of thine shall be known as the Son of God....”

Before giving her response, Mary stands. She turns to face the altar and raises her hands; her gesture during the reenactment, as in Van Eyck’s painting, parallels the expancis minibus made by the priest during the mass. She submits: Ecce ancilla domini, fiat michi secundum verbum tuum [Behold the handmaiden of the Lord, let it be to me according to your word]. The actors remain in place as the mass continues, and the dove is raised again during the singing of the Agnus Dei.

Symbolism in The Annunciation

The setting of the scene within a church itself is significant, and new. Van Eyck appears to have been the first panel painter to locate the Annunciation inside a church. (The manuscript illuminator known as the Boucicaut Master, who worked for the same Burgundian court, had already done so, and Van Eyck probably would have seen his work.) In the Low Countries, the church setting of the Annunciation would become popular, while French Annunciations typically occur in a domestic interior and Italian ones in an arcade. Both the ecclesiastical setting--and the over-large size of the Virgin within it--help identify the Church with the person of Mary.

Many aspects of the church decoration serve to support the idea that the Annunciation represented the moment of transition from the old era of the Hebrew Law to a new era of Christian Grace.

Explore the slide show to learn the significance of different details shown in the painting.

The setting of the scene within a church itself is significant, and new. Van Eyck appears to have been the first panel painter to locate the Annunciation inside a church. (The manuscript illuminator known as the Boucicaut Master, who worked for the same Burgundian court, had already done so, and Van Eyck probably would have seen his work.) In the Low Countries, the church setting of the Annunciation would become popular, while French Annunciations typically occur in a domestic interior and Italian ones in an arcade. Both the ecclesiastical setting—and the over-large size of the Virgin within it—help identify the Church with the person of Mary.

Many aspects of the church decoration serve to support the idea that the Annunciation represented the moment of transition from the old era of the Hebrew Law to a new era of Christian Grace.

On the rear wall, to the left of the single window, the baby Moses is presented to the pharaoh’s daughter—a parallel to Mary’s conception of Jesus. On the right, the Lord presents Moses with a scroll bearing the words of the Second Commandment—as the commandments established the Old Covenant between God and man, the Annunciation is the start of a New Covenant under Grace.

The single window, perhaps with the figure of Jehovah, is contrasted to a triple window suggestive of the Christian trinity below it.

Roundels in the floor bear signs of the zodiac, suggesting God’s dominion over all creation. One plausible arrangement of the entire set would place the sign for Aries (encompassing the date of the Annunciation on March 25) under Gabriel and that for Virgo—the Virgin—under Mary.

The seven beams of light that carry the dove to Mary represent the seven gifts of the Holy Spirit: wisdom, understanding, right judgment, fortitude, knowledge, piety, fear of the Lord.

Lilies suggest the purity of the Virgin.

Slideshow
Netherlandish Painting in the 1400s

Among Van Eyck’s diplomatic missions for Philip the Good were two trips to Lisbon, where a marriage contract with Isabella of Portugal was signed. Van Eyck may have accompanied the bride-to-be back to Flanders and almost certainly would have painted her portrait. Portraits were frequently a part of dynastic marriage negotiations: they often “introduced” couples who had never met, and they could authenticate the bride’s identity. It has been suggested that Van Eyck also used Isabella’s features for Mary in this Annunciation. If so, her inclusion served as a prayer for a fruitful union.

More Scenes of the Annunciation from the Collection