History of the Collection The National Gallery of Art’s collection of Italian paintings is considered the most important in America and among the finest and most comprehensive in the world. To provide the most authoritative scholarship on the earliest paintings in the collection, the Gallery turned to one of the leading historians of early Italian art, Miklós Boskovits. Italian Paintings of the Thirteenth and Fourteenth Centuries is a fitting memorial to Miklós, who did not live to see the project to completion. Miklós shared responsibility for the previous volume, on the Gallery’s fifteenth-century Italian paintings, with David Alan Brown, curator of Italian painting at the Gallery, and others. Here he is the sole author of the catalog entries, while Laurence Kanter, chief curator for the Yale University Art Gallery, wrote the introduction.

Due to the Italian collection’s size, scope, and quality, the decision was made early on to divide the catalog into four volumes, corresponding to the standard art historical designations of medieval, early Renaissance, high and late Renaissance, and baroque and rococo. The first of these, published in 1996, deals with the later Italian pictures, those dating from the seventeenth and eighteenth centuries. The previous volume took up the fifteenth century. The present volume treats the medieval works of the thirteenth and fourteenth centuries.

The Italian panels discussed in this catalog are not nearly so numerous as those dating from the fifteenth century, and, though well known to specialists, are perhaps less familiar to the art-loving public than are the Gallery’s holdings of works by Leonardo, Botticelli, Raphael, or Titian. All the same, this part of the collection holds works by artists who were some of the most important Italian painters in all of art history —  and , for example, and in the case of the great Sienese master, the National Gallery of Art is the only institution in the United States to own not one but two panels from Duccio’s monumental masterpiece, the Maestà. In addition, many of the Gallery’s Italian paintings from the late medieval or Gothic period are highly important, culturally speaking, and all of them possess manifold aesthetic attractions of their own. Displayed on the main floor of the West Building, they occupy two galleries and share a third with fifteenth-century works, while a large Duccesque altarpiece, because of its size, is kept more or less permanently in storage. The online edition of this catalog also includes a recent acquisition,  triptych, one of many new works acquired by the Gallery from the Clark collection at the Corcoran Gallery of Art, Washington, DC. (This picture was acquired after Miklós Boskovits’s death.)

Many of the paintings cataloged in this volume are small works painted for private devotion; others are fragments from multipaneled altarpieces. In many cases, the larger central panel of a dismantled polyptych has remained in Italy, while the other surviving elements are scattered in museums throughout Europe and America. An effort has been made, therefore, to suggest the original context for these works through schematic reconstructions, with photographs of the other panels making up the complex in question. Such reconstructions will help users of the catalog understand the panels’ original purpose and meaning. At the same time, these irregularly shaped fragments were often put into rectangular frames as if to suggest that they were small easel paintings. The Gallery’s formal, balanced hanging system has not altered this approach, though in some cases new frames approximating period frames have been substituted.

Many of these panels were also cut down, shaved in the back, and cradled to prevent movement, with the unfortunate result that much technical evidence about them has been lost. That said, careful examination in the Gallery’s Conservation Laboratory has produced a considerable amount of new technical information, such as the fact that double-sided  was in all likelihood a reliquary, x-radiography having revealed roundels for holding relics beside the gable.

The present catalog is the first to offer a candid, thorough assessment of the condition of the Gallery’s earliest Italian paintings. The staff of the Gallery’s painting conservation and scientific research laboratories carried out systematic examinations and documented the results in formal technical reports. Professor Boskovits then used these reports as the basis for his remarks in the technical summaries that precede each entry. The technical summaries are therefore an integral part of the entries; they aim to inform the reader about the state of preservation of each painting, which affects any effort to determine its attribution or date.

Nearly all of the Gallery’s earliest Italian paintings belonged to two collectors whose holdings complemented each other. Andrew Mellon (1855 – 1937), the Pittsburgh industrialist and financier who served as U S Treasury Secretary, founded the Gallery in 1937 to rival the great national art collections in Europe. Not an adventurous collector, Mellon had conservative taste, running to Dutch and English portraits and landscapes. But the national gallery he envisaged for Washington had to have early Italian paintings to be representative, so in addition to masterpieces like Botticelli’s  and Raphael’s , Mellon sought out earlier Italian pictures by equally renowned masters. Clearly, he was thinking of how the museum experience should begin: the Gallery’s first accessioned painting is the rare owned by Mellon. The earliest painting in his collection, the Mellon Madonna, as it came to be called, demonstrates the eastern influence that informed many of the Italian painters who followed. Three other paintings, , , and , were then believed to be by Cimabue, a major precursor of the Renaissance profiled in Giorgio Vasari’s Lives. The three panels, grouped as a triptych, had been in the famous collection of Italian “primitives” in Paris owned by Alexis-­François Artaud de Montor (1772 – 1849). In this catalog, Boskovits has reattributed the panel to a contemporary of Cimabue’s named . In the case of another work, , the great name borne by the painting has stood the test of time. The Nativity scene, accompanied by lateral panels depicting the prophets Isaiah and Ezekiel, belonged to one of the most famous Italian paintings of the Middle Ages — the mammoth, double-sided Maestà altarpiece, which Duccio di Buoninsegna painted for Siena Cathedral in 1308 – 1311.

The Nativity came from the front side of the predella, or base, of the Maestà, while the other Duccio panel in the Gallery’s collection, , was detached from the back of the polyptych. This second predella panel was donated, with the majority of the thirteenth- and fourteenth-century Italian pictures, by the American dime-store magnate Samuel H. Kress (1863 – 1956). Kress also sought out masterpieces by great names, like the Duccio or Giotto’s fine , which is displayed in the same gallery. But, unlike Mellon, Kress seems to have been genuinely fond of Italian paintings and acquired them systematically. He aimed to build the largest and most comprehensive series of these works in private hands.[1] Kress originally intended to form his own museum, but he was persuaded to join his holdings with those of Mellon in the newly established National Gallery of Art. By 1941, when the Gallery was opened to the public, Kress’s donation consisted of 375 Italian paintings, and the Kress Foundation later added many others. Kress’s decision to bring his collection to Washington led to an extensive revision of his holdings over a period of years, culling its numbers to focus on the major masters. In the 1950s it was divided up, with the most important examples being purchased for or retained by the Gallery, and others, including some that formed part of the original donation, dispersed to smaller American museums.[2]

Samuel Kress’s lifelong devotion to Italian — particularly early Italian — art may be seen best, perhaps, in his seventeen-room duplex apartment located at 1020 Fifth Avenue across from the Metropolitan Museum of Art in New York (see images below). Kress displayed his collection in pseudo-Renaissance interiors, where, in a setting of period furniture and decorative arts, marble and tile floors, carved chests and tables, and lead-glass windows, they were meant to evoke the world from which they came. Photographs of the Kress apartment, dating to the 1930s, feature Duccio’s predella panels, Giotto’s Madonna and Child, and Agnolo Gaddi’s  next to a staircase, as well as the marvelously preserved little Nardo di Cione triptych hanging over a bed. 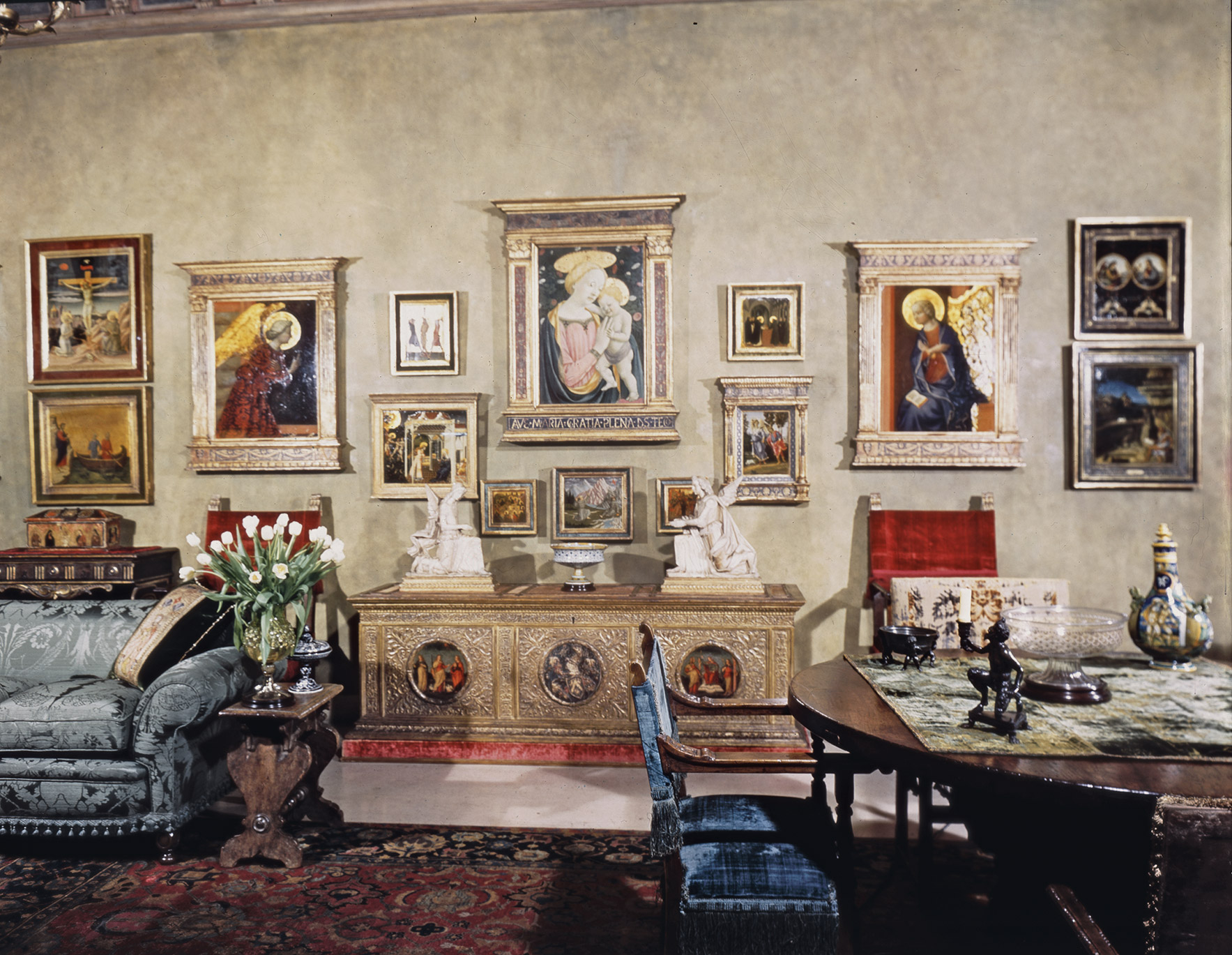 The Venetian Sitting Room in the Samuel Kress apartment at 1020 Fifth Avenue, New York, 1938 / 1939, with paintings now in the National Gallery of Art. Duccio’s The Calling of the Apostles Peter and Andrew (cat. 12, 1939.1.141) is at lower left. Department of Image Collections, National Gallery of Art Library, Washington, DC 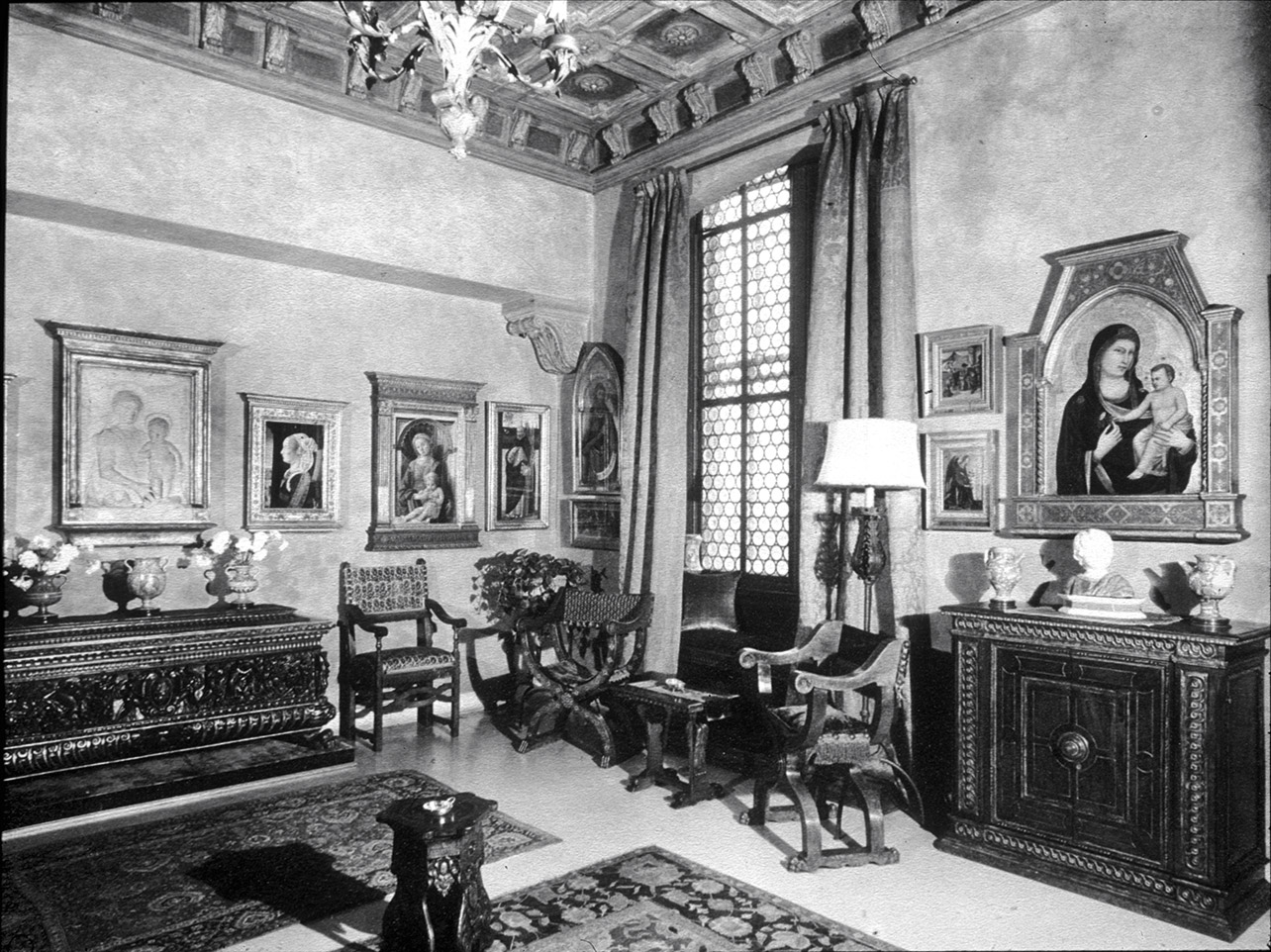 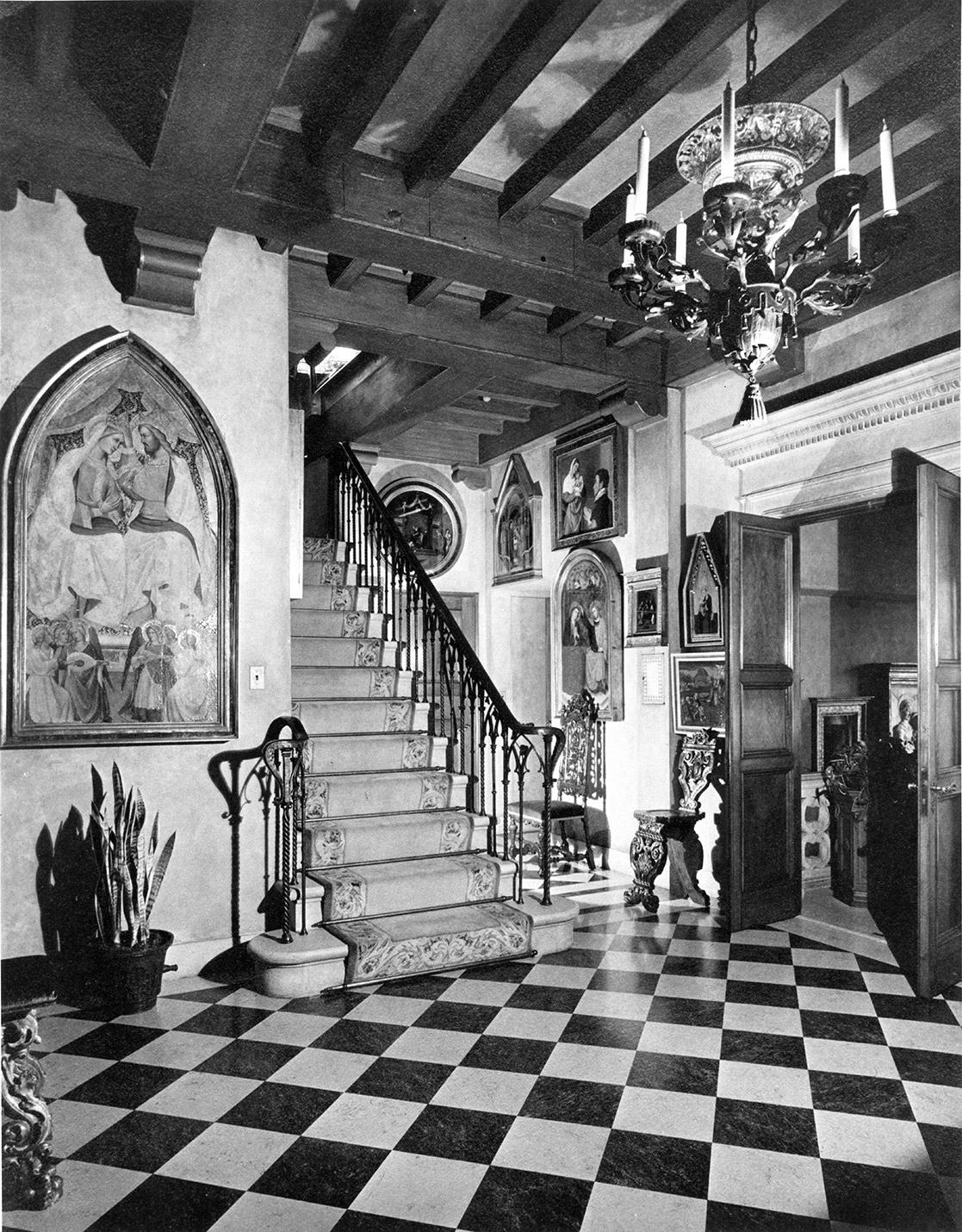 The Entrance Hall in the Samuel Kress apartment at 1020 Fifth Avenue, New York, 1938 / 1939, with paintings now in the National Gallery of Art. The Coronation of the Virgin with Six Angels by Agnolo Gaddi hangs at left. 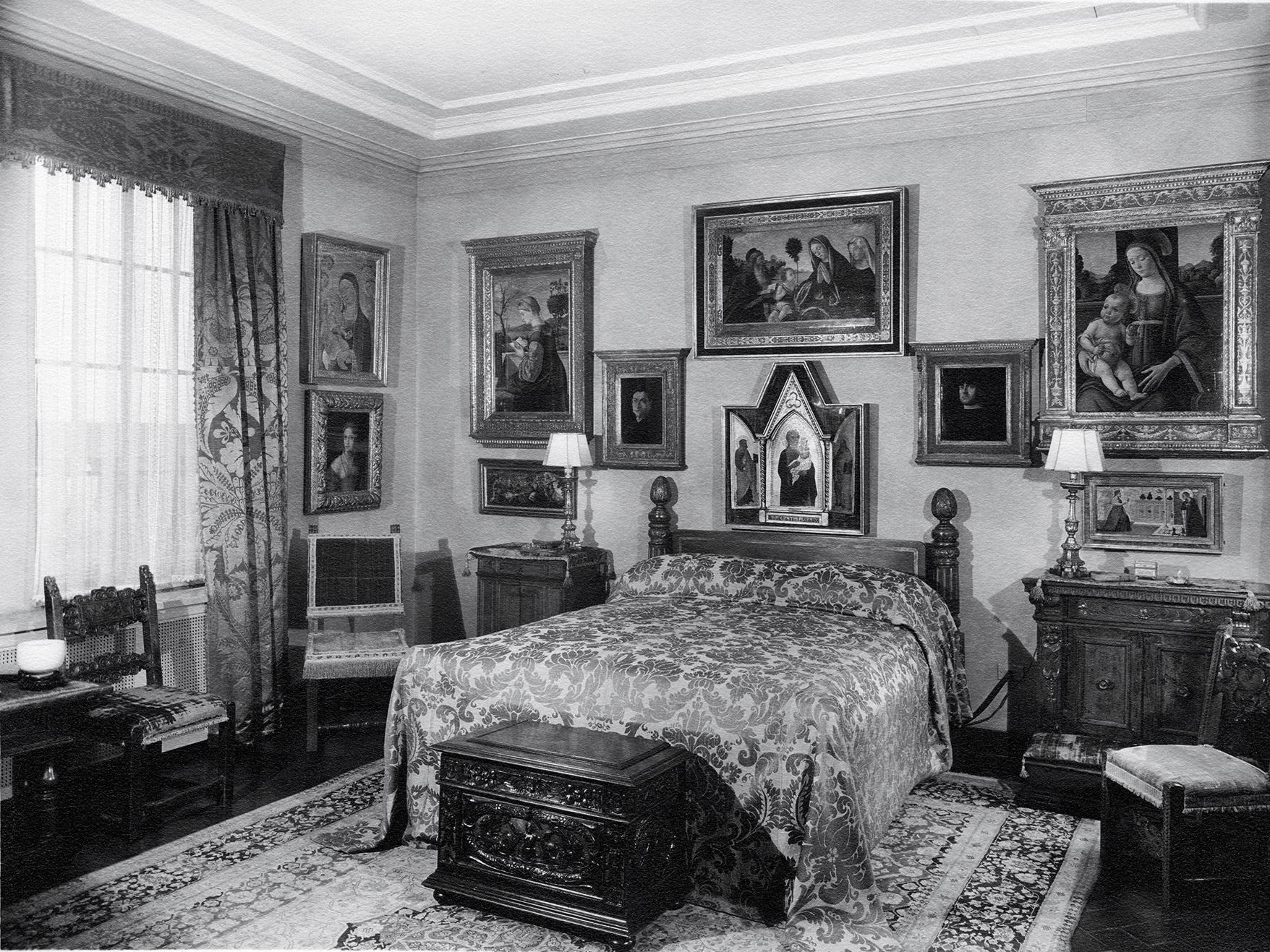 This catalog follows upon and effectively supersedes the pertinent entries in Fern Rusk Shapley’s Catalogue of the Italian Paintings, published in 1979.[3] The Gallery’s early Italian paintings have long been a focus of scholars’ attention, but while the present catalog assiduously records these views, whether in agreement or contradiction, in every case it also offers a fresh examination of the works. Similarly, the bibliography provided for each painting includes virtually every significant citation. The history of ownership is also given in greater detail than heretofore, thanks in part to information available from the Getty Provenance Index and to archival research. All exhibitions in which a work appeared are included, because of the increasing importance of exhibitions for art historical investigation.

The donation of these thirteenth- and fourteenth-century Italian paintings to the Gallery on the part of Mellon, Kress, and others took them out of the private realm and made them accessible to a wide public, who we hope will find this catalog interesting and useful.