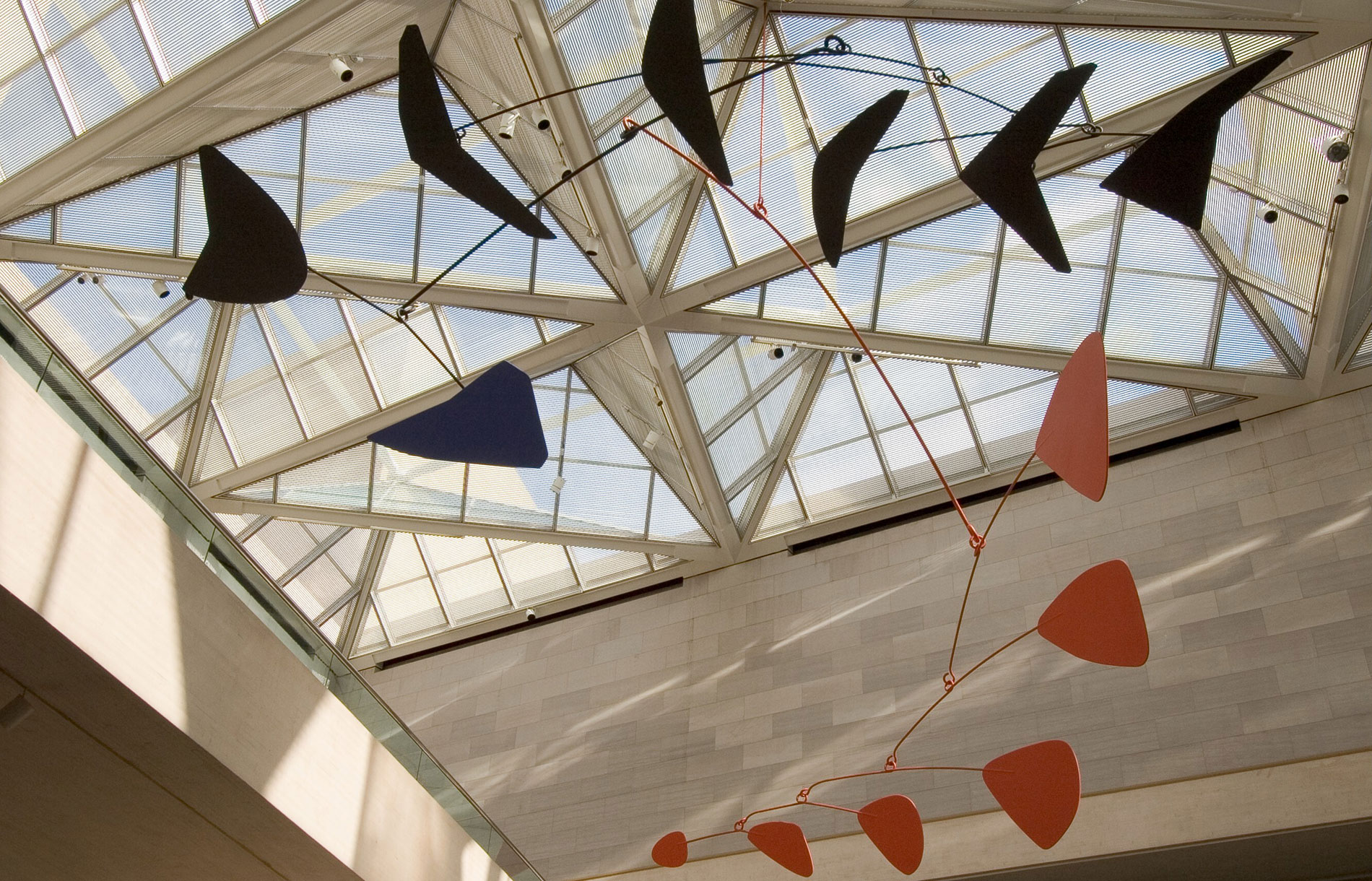 A site-specific commission created to open the National Gallery’s East Building in 1978, Calder’s 76-by-30-foot mobile is at the heart—or, perhaps better put, the respiratory system—of the East Building. High in the four-story atrium, the red, blue, and black wonder softly soars and spins, suggesting the flight of a gliding airplane or a giant bird coasting on thermals.

“It was very important to the artist that the piece could move gently with the air currents,” says Shelley Sturman, the National Gallery’s senior conservator, “and the air handling systems were designed to help make that happen.”

But this constant motion, she adds, “is something we’ve had to grapple with.”

But first, the artist—and the architect—had to grapple with it.

In 1968, the National Gallery’s trustees selected architect I.M. Pei to design what would come to be known as the East Building across 4th Street from John Russell Pope’s 1941 West Building.

I love red so much that I almost want to paint everything red.

Above all, Pei wanted to make the new structure “a fun place” for visitors. “We’ve got to keep them. Once they come in, we don’t want to lose them. It would be terrible if they come in, and look at it and say ‘I’ve seen it,’ and go home.”

To help achieve that, Pei commissioned Calder to create a work for the atrium. The artist’s inventive works and playful manner prompted his longtime friend, playwright Arthur Miller, to describe him affectionately as “a big child.”

The pair had worked together a few years prior, when Pei commissioned Calder to create his massive La Grande Voile (1965) to stand in front of a building he was designing for the Massachusetts Institute of Technology.

In architectural settings, Pei preferred abstract sculptures, believing that they scale up well. “Once a piece becomes abstract,” he explained, “there are possibilities of enlargement.”

Pei and Calder met to discuss the National Gallery commission in 1971. Shortly afterward, Calder—in one evening—created a model, roughly one by two feet, of  a tri-colored aerial work that delicately balanced 13 paddles on 13 branches.

But enlarging the model posed a problem:  it had to be scaled up by a factor of 32 to fit Pei’s vision for the building. This meant exponentially expanding its weight.

The Challenge of Creating a Monumental Mobile

Calder first turned to Etablissements Biémont, a steel works in Tours, France, that had fabricated his monumental works before. But after visiting the facility to see progress on the mobile, Pei recalled being “terribly disappointed. It almost looked heavy enough to support the building.”

Constructed from steel, the piece would top the scales at 6,000 pounds, a reality that would render the mobile . . . immobile. Movement was critical to the artist’s intent.  Calder turned to Paul Matisse. Paul was the grandson of famed French painter Henri Matisse and son of Pierre Matisse, who ran a Manhattan gallery that sold Calder’s works.

Not only had Paul Matisse grown up immersed in art but he was also an inventor. He had experience working with jet planes, and as an artist, he created sound artworks and kinetic sculptures. Perhaps most pertinent to the task at hand, he had invented the kalliroscope, a device that made fluid currents visible. He understood fluid dynamics and the kind of air flows required to animate Calder’s mobiles.

Matisse’s solution was to forgo steel. In its place, he suggested “a new kind of aerodynamic panel used for the wings of airplanes that was aluminum sandwiched with” a honeycombed structure in the middle, explained National Gallery senior lecturer David Gariff.

Using these aluminum honeycomb panels coupled with aluminum alloy tubes, Matisse was able to get the mobile’s weight down to 920 pounds, enough to ensure its graceful motion.

Once a piece becomes abstract, there are possibilities of enlargement.

Today the National Gallery operations staff keep the mobile gently spinning and twisting. “We use a Pixy camera, which can identify colors,” explains energy manager Brock Manville. “We have taught it to recognize and track the shades of red and blue Calder used in the sculpture. The camera sends information about the movement of the sculpture to the control systems, which then adjust the air flow.”

Sadly, Calder never saw his work in the East Building. He approved the sculpture’s final appearance and construction, but the artist passed away in November 1976, a year before its installation.

That’s why the work remains untitled. As Gariff points out, artists usually only name works after they’re completed. “You don’t name a baby until it’s born,” Calder is reported to have said.

Paul Schmelzer
Arts Journalist and Founder of The Ostracon