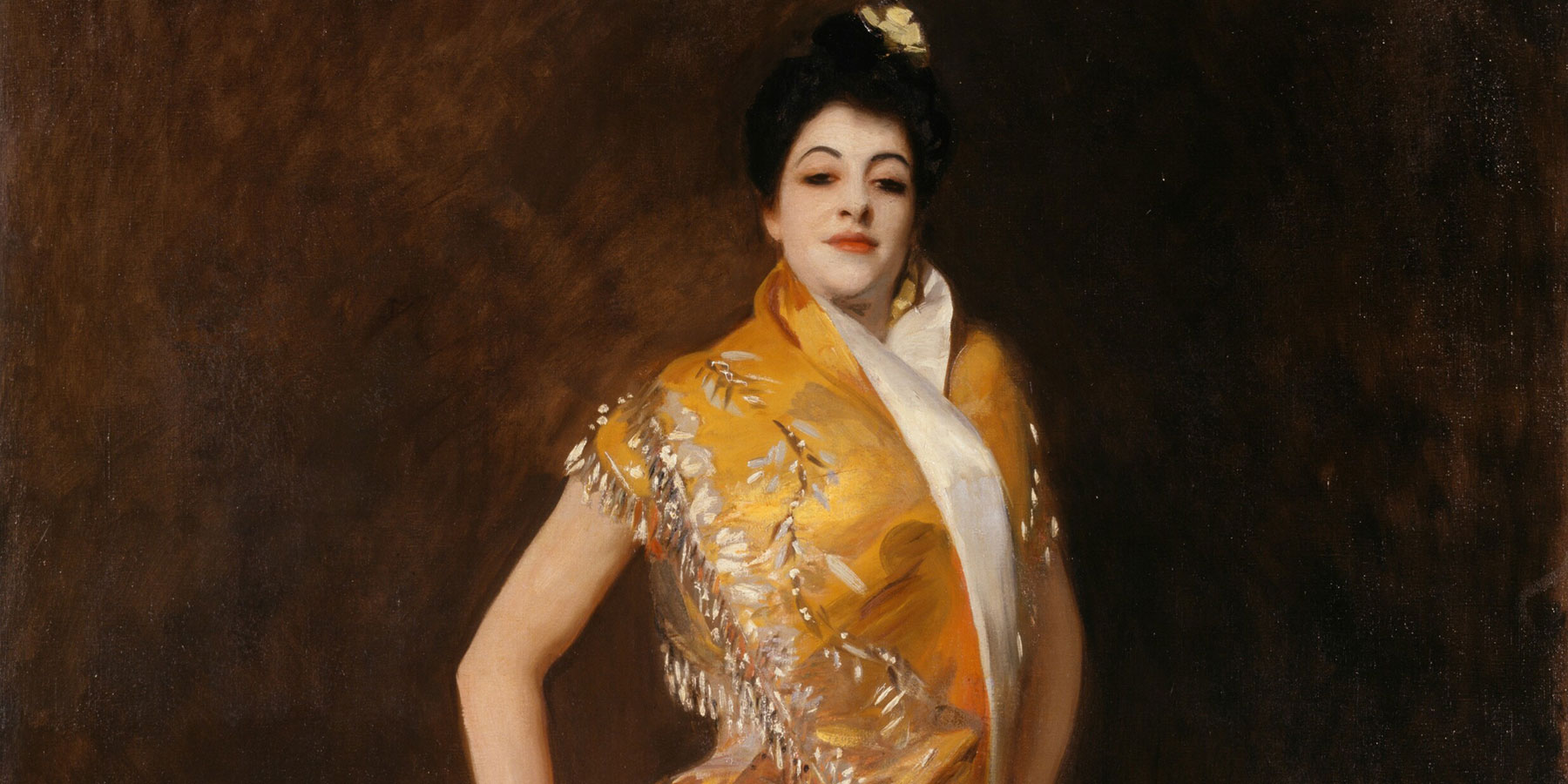 Richard Ormond, cocurator of the exhibition Sargent and Spain and great-nephew of the artist, has spent a lifetime studying Sargent and how he paints. Here, Ormond gives a personal tour of three works in the exhibition.

If we cut up close to a Sargent painting, it looks rather a mess. But if we stand back, it’s all suddenly and absolutely right. Sargent is in complete command of the medium. His brushwork is so energetic, so good. He does it at speed, with single dashes.

Among Sargent’s many dance-themed works is this masterpiece—“the picture of the year” when it was shown in London in 1891.

La Carmencita is a tour de force. Sargent paints his subject in character, as a performer. She danced not only in theaters but also in private homes and at parties given by Sargent and his friends. Sargent loved Spanish music, and Carmencita brought a sophistication to the flamenco, a type of Spanish dance.

The picture is very theatrical. Carmencita is highlighted against a mysterious background, dark and deep yet glowing. She’s about to step into the dance—poised and looking at her audience. I love the way that one foot just comes out.

Sargent pushes the outline of the dress, extending it almost like a dome. He uses colors—yellow, obviously, and gray, and lots of others are in there—to get that rounded effect. It gives us this three-dimensionality. He loves ballooning dresses. And she is so regal, elegantly rising above it.

First, he gets the bedrock right—the shapes and what he’s going to do: the light and dark, the contrasts, the tonal values. Then he’s free to embellish the image with an instant kind of brushstroke.

With a few quick flicks of the brush, he gives us the illusion of dense sequins decorating the lower edge of her dress. He transforms these tiny beads into paint without losing any of the sparkle. And he does it so instinctively. He doesn’t fiddle.

She’s flamboyant; she doesn’t give a damn.

Look at the flurry around the waist. He’s a very material, physical artist who loves to manipulate paint. And isn’t it a great moment, that broad sweep of sash across her chest? She wears a flower in her hair, just to top off the costume. She’s flamboyant; she doesn’t give a damn.

A Marble Fountain at Aranjuez

Sargent also painted a series of palace gardens. He loved fountains—one is the focus of his splendid painting from Aranjuez, just south of Madrid.

Highlights are terribly important in Sargent’s work. They raise the whole tempo; they give the picture life. Here, it’s the lower part of the fountain that’s got him going. He’s playing marble (light) against shadow (dark)—just look at those squiggles under the decorative features.

He’s also flicked a few highlights into the background. Those little dashes of color in yellow and white bring the end of the avenue on the right to life. Aren’t they just lovely? And then on the left, a rather mysterious feature—a bright green shape, like a huge leaf—lights up those dark trees.

This beautiful fountain, this peaceful place. It’s like the slow music of time.

Those benches beyond the fountain are quite interesting—they’re empty. He doesn’t fuss the picture up with people. He doesn’t want the intrusion. The scene itself is so alive, shimmering with light though shaded by trees. This beautiful fountain, this peaceful place. It’s like the slow music of time.

And it’s painted quite loosely; it’s not painstaking at all. Get up close and the illusion of detail, of exact architecture, is contradicted by how freely he paints. It can be surprising and extraordinary.

Many of Sargent’s works showcase pattern. This painting of a fisherman on the island of Majorca vibrates with brilliant sunlight and shadow.

Take the thatched roof. It’s all about uprights and verticals, with the wooden supports running at an angle across the top. But those struts cast shadows on the floor in a pattern of squiggly lines, as if the structure above has gone all wonky. And look, just behind the fisherman, a bucket sits on the ground and nets hang over the fence.

The composition is quite tight and complex. Typical for Sargent, he’s chopped off his subject—a young fisherman—and pushed his face right up by the side of the picture. He squeezes the scene. He doesn’t want to expand. He paints a detail, with a sudden drop to the sea at the end. Glimpsed just beyond the rocks and roof, that shimmering sea is a great feature.

Sargent’s ability to conjure up form and light and color in pictures—it’s what makes his works so fantastically alive, so real and so forceful.

Sargent’s ability to conjure up form and light and color in pictures—it’s what makes his works so fantastically alive, so real and so forceful. Each painting presents a sort of challenge. He has an idea in his mind, very clear, of what effect he wants to achieve. But can he do it? Can he pull it off? Is it going to live on the canvas? And will it sing once it’s on the wall?

It’s all in the touch, I think. He makes a mark, withdraws to look at the effect, and then comes forward and makes another mark—all in the absolute ability to make paint express form. It’s what makes his surfaces so exciting. And we’re swept away.

Richard Ormond
Exhibition cocurator and great-nephew of the artist