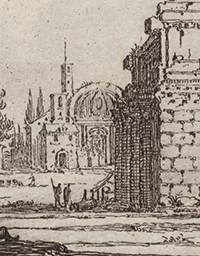 The current Church of Santi Luca e Martina is the result of a laborious effort undertaken by the artist Pietro da Cortona (1596/7‒1669), who served as principe of the Accademia di San Luca at points during his career. His life is literally intertwined with that of the institution, since he prepared a burial place for himself in the crypt of the church. The documents presented on this website, however, concern not the church built after Cortona’s design starting in the 1630s but the structure that predated his intervention. In 1588, when the artists moved in, the Church of Santa Martina was, as visual evidence attests, an amalgamation of strata going back to ancient times. [1]

While it is known that the artists gained the new site in the Roman Forum in December 1588 after being removed from the Church of San Luca near the basilica of Santa Maria Maggiore a few years earlier at the request of Pope Sixtus V (reigned 1585‒1590), a question that still needs to be addressed is whether the pontiff ever compensated them for the monetary loss incurred from what seems to have been extensive refurbishment of San Luca not long before its demolition. Another question regards who was behind the institution in the transition years from the location near Santa Maria Maggiore to the Forum. The story of the transfer is usually told in terms of replacement, but if the Church of San Luca on the Esquiline was razed soon after Felice Peretti acceded to the pontifical throne as Sixtus V, there was a hiatus of a few years when the Congregazione di San Luca did not have a building in which to carry out its meetings, professional functions, and religious services. It may be that not only Girolamo Muziano—the driving force behind the institution before his death in 1592—but also his younger fellow artist and former protégé Cesare Nebbia played an interceding role on behalf of the painters. [2] Although Muziano enjoyed preeminence in papal commissions under Pope Gregory XIII (reigned 1572‒1585), Nebbia worked intensively on Sixtus V’s major artistic commissions, often as a leader (for instance, at the Lateran Palace). In this capacity, he may have been sufficiently close to pontifical advisors to try to advance the artists’ cause.

The new location in the Forum has typically been seen as somehow less attractive and dictated by the urge to revive a decrepit zone of the city. First of all, it is worth pointing out that from the viewpoint of civic administration, the new location was on the boundary of the same rione of the city as the old, the Rione dei Monti. Its borderline situation emerges in several documents in which it is identified as belonging to both Rione dei Monti and Rione Campitelli. [3] Although the area to the northeast of the Church of Santa Martina was undergoing extensive urban transformation, the Forum, toward which the church opened, functioned as a cattle pasture (hence its epithet, Campo Vaccino). At the same time, period sources referred to the great importance that the area in front of the churches of Sant’Adriano and Santa Martina (later Santi Luca e Martina) had enjoyed in ancient Rome. According to tradition, this very spot was “the navel of Rome and of the entire world.” [4] Whether or not artists were initially aware of the status of the site, their familiarity with such opinions could have subsequently bolstered their claims for the significance of the Accademia’s location.

Period sources often call the church that preceded the unitary building erected after Cortona’s plans the Church of San Luca in Santa Martina, implying a complex of structures in which one was dedicated to the patron saint of painters. Although, most probably because of the new dedication of the church conjointly to Santi Luca e Martina, this spatial arrangement apparently dissipated, documents indicate that the artists continued to conceive of the churches as distinct. Like their neighbors, the Falegnami (carpenters), who decided to build two separate establishments within a unitary structure for the Church of San Giuseppe dei Falegnami and the Church of San Pietro in Carcere, the Accademia members did not collapse the two dedications to Saint Martina and Saint Luke within a single monument. Pietro da Cortona’s will (c. 1669) attests to the division between the underground Church of Santa Martina and the upper Church of San Luca. [5] A 1634 document conserved in the Archivio di San Luca also refers to the Church of Santi Luca e Martina as two separate entities in the context of the decision to permit Pietro da Cortona to do “whatever he wanted with the underground chapel of Santa Martina.” [6]

It is also intriguing that even though the adjacent and much more capacious Church of Sant’Adriano was vacant when Sixtus V assigned Santa Martina to the artists, the pontiff chose the latter as an adequate venue for the Accademia. The choice may have reflected the relatively small size of the artists’ previous church, San Luca. In an eighteenth-century manuscript, Giovanni Mario Crescimbeni mentioned that the artists had asked for Santa Martina during the pontificate of Sixtus V’s predecessor, Gregory XIII (1572‒1585). The Church of Sant’Adriano did enter into the pontiff’s plans for urbanizing the area, but it was instead entrusted to the Brothers of Santa Maria della Mercede in 1589. Santa Martina functioned as a parish church at the time of the transfer, and thus, as period sources record, this arrangement necessitated distributing the parochial designation to three neighboring churches: San Nicola in Carcere, San Lorenzo ai Monti, and Santa Maria in Cosmedin.

Once installed in the Church of Santa Martina, the artists strove to reorganize the structure to satisfy their needs. Documents on this website attest to work carried out in 1590. [7] In addition, contemporary authors noted changes already implemented in the church. According to Ottavio Panciroli, campaigns to elevate the pavement had already been carried out by 1600. [8] In his early history of the Accademia (1604), Romano Alberti referred to a more spacious Church of Santa Martina that was under construction to meet the needs of the institution and to the “accademi[e]” (lectures and drawing classes) taking place in a room contiguous with the church. [9] Documentary evidence indicates that plans to reconstruct the church preoccupied Ottaviano Mascherino, a member of the Accademia who later endowed the institution with a rich collection of architectural drawings, including his own ideas for a new church. [10] Other details not necessarily visible on maps or plans of the period surface from the documents from the first three decades of the seventeenth century. They attest to constant maintenance of the building: the leveling of the pavement, the repair of the roof, and other interior modifications. Money was raised principally through modest taxation of the members of the academy, the sale of stone from the ancient site on which the church stood, rents, and investments. [11] A notable case was the selling of two marble istorie, which, according to Flaminio Vacca (1594), were then found in the house of the sculptor “Giacomo Porta.” [12] In 1621 the Accademia, at the behest of Antiveduto Gramatica, even contemplated selling Raphael’s painting of Saint Luke in order to use some of the money for repairs and eventual work on the church. [13] Other information in the documents concerns topographical details, such as the Accademia’s garden, and the religious services that were regularly held at the academy, led by a chaplain who had accommodations in a few rooms of the complex.

Except for Dupérac’s engraving of the area around the Accademia’s site in the Forum (1575), shown here in the carousel, few visual sources shed light on the intermediary church, which underwent frequent changes, preceding the building constructed ex novo by Cortona. Although in Dupérac’s view the facade does not suggest a large building, aerial views in his as well as Tempesta’s maps disclose a consistent footprint. Tempesta’s map (1593) shows very little of the facade. The church is featured in Matthias Greuter’s map of 1618, but the small dimensions of that map do not allow us to discern architectural elements such as the facade of the church. The isola to which the church belonged, however, is well delineated. The figure of the church appears of medium size in relation to the other churches in the Forum.

Another source, published in 1615 but probably produced in 1612–1613, is a view of the Arch of Septimius Severus in Giacomo Lauro’s Antiquae urbis splendor. [14] Since Lauro’s interest was in antiquities, he did not label modern buildings included in his views, and such is the case with an intriguing facade that, given its location, should be that of the Church of Santi Luca e Martina. [15] The facade is flat and unadorned but nonetheless meets expectations for a church, with a large, framed entrance and an oculus window.

Visual and documentary information about the interior of this intermediary church is scant, but documents give evidence of interest in decorating the church. From 1618 there was an altar painting by Giovanni Baglione, an important figure of the Accademia in those years. [16] Period inventories of the Accademia list a larger and variegated body of works of art in its possession, but these pieces were not part of the church display.

Following documented renovations throughout the first decades of the seventeenth century, in the mid-1630s Francesco Barberini, wishing to leave his mark as cardinal protector of the Accademia, commissioned a grandiose architectural project from an artist familiar to the Barberini, Pietro da Cortona. Giacomo Pinarolo, in his L’antichita’ di Roma (1713), says that the artists’ undertakings on the church before the Barberini project had ruined the building. [17] How this assessment came down to Pinarolo almost a century later remains a conundrum, but the desire for a much-needed functional church must have been acute and, as such, transmitted through time. Cortona’s building erased the decades of strife, starting from scratch. His Church of Santi Luca e Martina is a much better-known chapter than its predecessor. It is worth noting that the artist was involved in the reconstruction of the church at the same time that he was engaged in frescoing the Salone of the Palazzo Barberini. Upon the discovery of the relics of Santa Martina, Cardinal Francesco Barberini and his uncle, Pope Urban VIII (reigned 1623–1644), became interested in financing the high altar. [18] Discussions for the new church began in 1635. Even as late as 1689, Filippo Titi reported that the church was still incomplete. [19]

[1] See the entry on the Church of Santa Martina.

[12] Vacca 1988 (1594), 68. Flaminio Vacca was a member of the Accademia, serving even as principe. These were panels with stories of Marcus Aurelius that were in the end transferred to the Campidoglio.

[15] There are a few discrepancies in Lauro’s arrangement of the monuments, especially the spatial relationship between the Church of San Pietro in Carcere and the Church of Santi Luca e Martina).