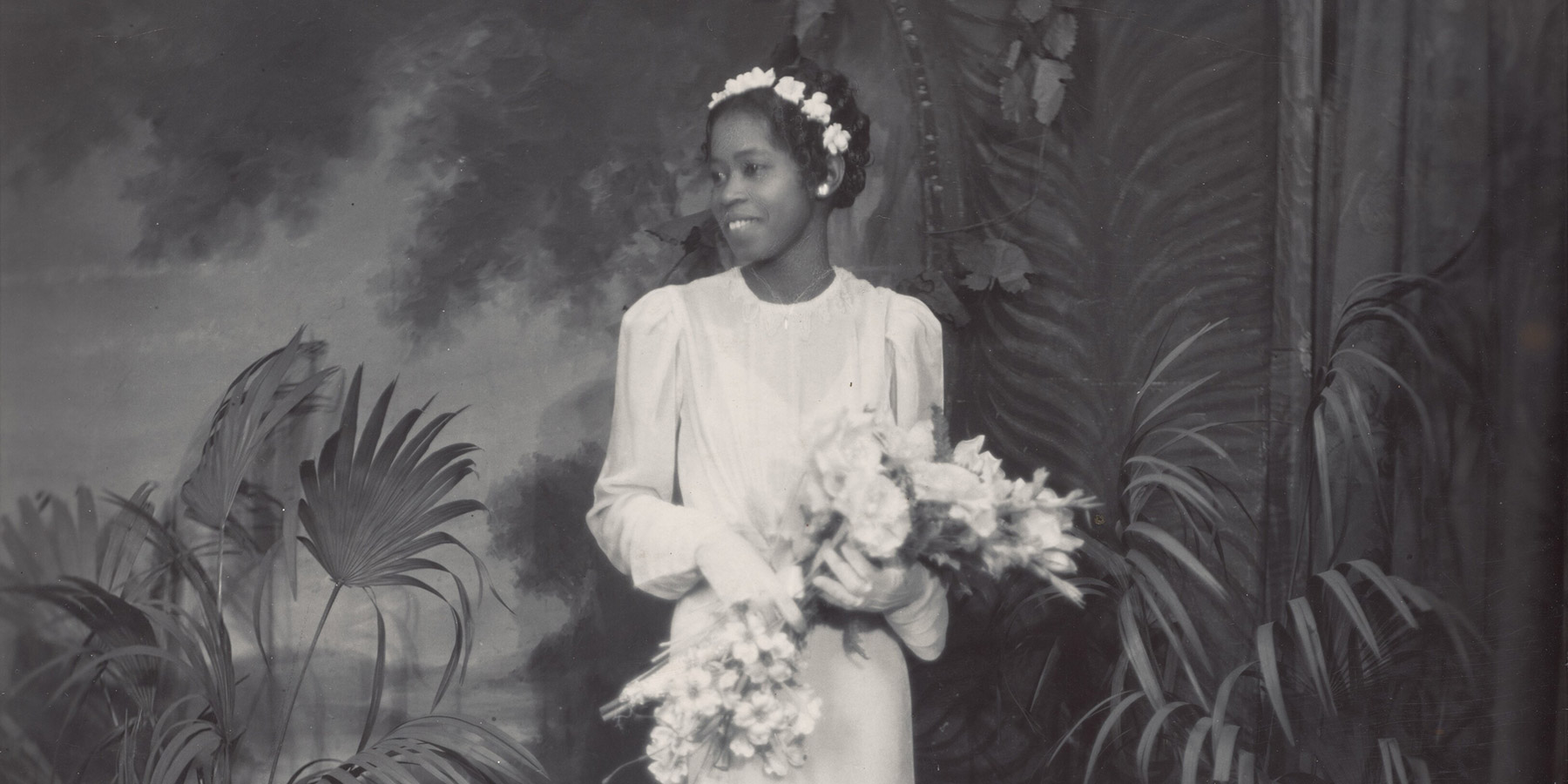 Like many portrait photographers of his day, James Van Der Zee retouched his negatives—just one of many techniques he used to show his subjects in their best light.

In Alpha Phi Alpha Basketball Team, Van Der Zee retouched under the eyes of the men and at the sides of their noses to smooth out shadows and wrinkles. He retouched more on the right sides of the faces to counteract a heavy shadow caused by strong sunlight coming from the left.

To achieve these effects, Van Der Zee drew on the negative with something opaque—probably a graphite pencil. Those pencil lines blocked some of the light passing through the negative when it was used to make a print. And the less light that strikes an area when a photograph is printed, the lighter that area will appear. So, graphite lines in a negative create light or white lines in a photograph.

Retouching can look messy under a microscope, but without magnification, a viewer probably won’t notice that the image has been retouched. The white lines against darker shadows create the illusion of a smooth mid-tone area.

Van Der Zee, though, went beyond these typical “touch-ups”: in a number of his photographs, he adorned his sitters with jewelry.

Lady with Wide-Brimmed Straw Hat is a beautiful example. It looks as though the sitter is wearing a bracelet and ring, sparkling white in the reflected studio lights. But up close under the microscope, the lines are clearly hand drawn. Van Der Zee ornamented the woman’s hand with jewels by adding them to the negative.

These details from Lady with Wide-Brimmed Straw Hat taken with a microscope at 15x magnification show the bracelet and ring that Van Der Zee drew onto the negative.

Although he drew freehand, Van Der Zee repeated similar styles of jewelry. For instance, the bracelet and ring in Portrait of a Young Woman recall those in Lady with Wide-Brimmed Straw Hat.

These enhancements reveal Van Der Zee’s eye for composition. The bright white jewelry shines against his subjects’ skin, introducing contrast and drawing the viewer’s eye. In Blumstein’s Sales Girls, a real ring is rendered in the same tones as the woman’s finger—but the ring Van Der Zee added sparkles.

These details from Blumstein’s Sales Girls taken with a microscope at 15x magnification show a real ring captured in the photograph (left) and a ring that Van Der Zee drew onto the negative (right).

But these flourishes attest to more than compositional skill. They reveal the photographer’s empathy and respect for his sitters. Van Der Zee sought to present his subjects as their finest, most decorated selves. This bride, for instance, is set against a backdrop of tropical fern plants, carrying a bouquet, and wearing a floral crown. Not content with that level of finery, Van Der Zee also drew her a necklace.

“Sometimes they [the photographs] seemed to be more valuable to me than they did to the people I was photographing, because I put my heart and soul into them and tried to see that every picture was better looking than the person,” Van Der Zee said. “I would figure out the best angle to try to get as much light and expression and character in the picture as possible.”

James Van Der Zee’s Photographs: A Portrait of Harlem is on view at the National Gallery of Art through May 30, 2022.