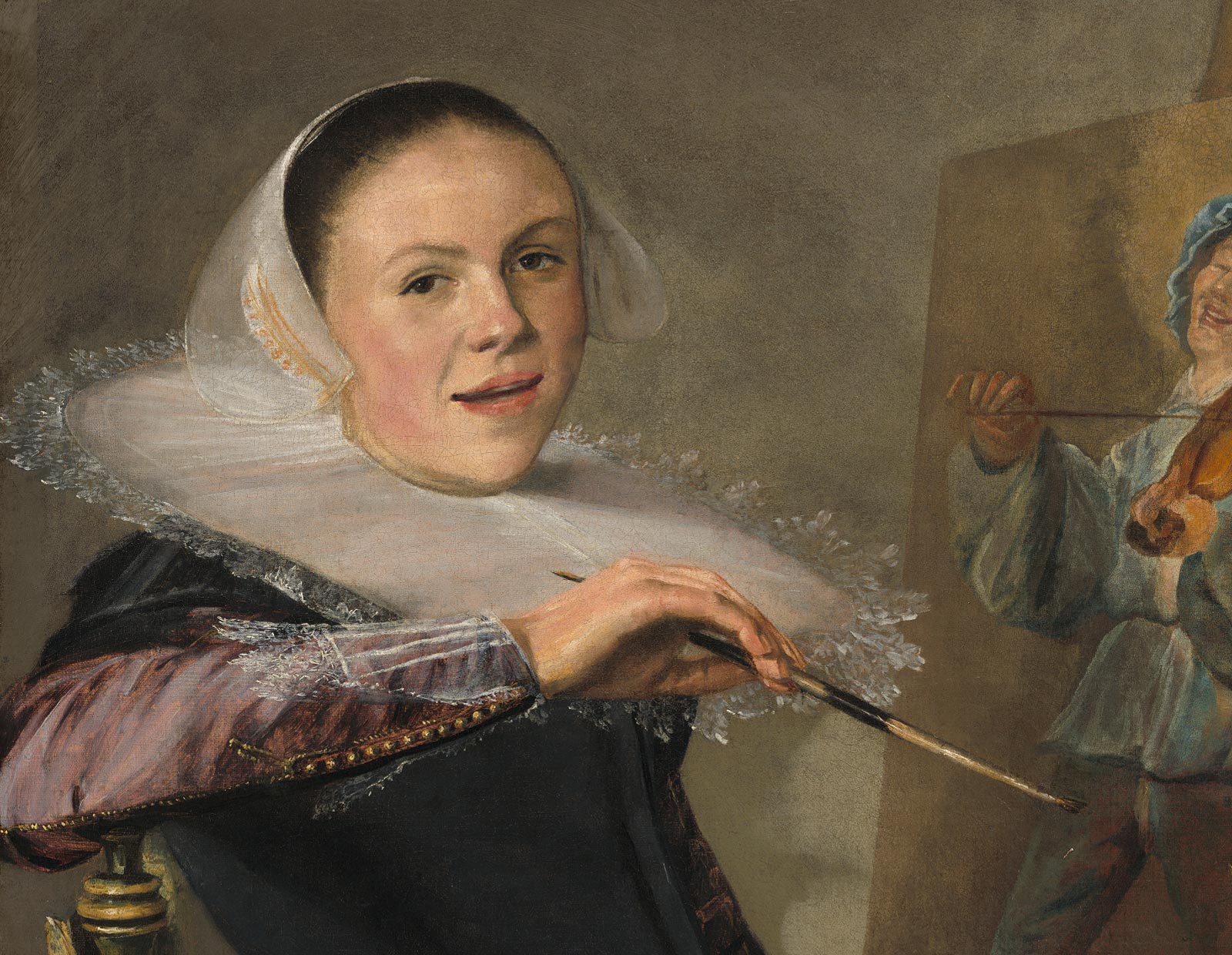 There also have been many experienced women in the field of painting who are still renowned in our time, and who could compete with men. Among them, one excels exceptionally, Judith Leyster, called “the true Leading star in art.”

Theodore Schrevel’s comment about puns on her name, which means “guide star,” but the artist was a star in her hometown. She was only 19 when an earlier city chronicler, Samuel Ampzing, praised her as a painter of “good and keen insight,” after having posed the rhetorical question, “Who has ever seen paintings by a daughter?” [Samuel Ampzing, Beschrijvinge ende Lof der stad Haelem in Holland, 1628, trans. Irena van Thiel-Stroman, “Judith Leyster,” in Painting in Haarlem, 1500-1850: The Collection of the Frans Hals Museum, ed. Neeltje Köhler (Ghetn, 2006) 224.] In Holland, as in the rest of Europe, professional women painters were indeed uncommon. Leyster was one of only two women accepted as a master in Haarlem’s painters’ guild during the entire 17th century.

This was probably made before her admission to the guild in 1633. She turns toward the viewer, smiling with full confidence as she paints. With lips parted as if to speak, she is casually posed with one arm propped on the back of her chair. Even the brushwork is free and lively. She appears to have paused briefly, looking from her easel to engage a visitor to the studio—a patron, perhaps, whose attention she invites to a work in progress.

In fact, Leyster’s self-portrait serves as a piece of self-promotion, advertising both her products and her skill. Her facility with the brush is suggested by the freshness of her own image and by her fistful of brushes, which she easily handles against her palette. Still incomplete, the canvas on the easel, showcases a type of painting for which Leyster was well known: the so-called merry company. These popular genre scenes depicted revelers, costumed actors, dancers, and musicians. The figure of the violin player in the self-portrait reprises one from a merry company Leyster had painted a year or so before. Her initial plan for the self-portrait, however, had been somewhat different. Infrared photography reveals that the painting on the easel had originally depicted a woman’s face. In all likelihood, this would have been Leyster’s own face—a self-portrait within a self-portrait. By using the fiddler instead, she was able to emphasize, in a single canvas, her skill in both portraiture and genre painting.

The “informalities” of Leyster’s self-portrait—its loose brushwork, casual pose, and momentary quality—reflect innovations introduced by Frans Hals in the 1620s. It is not certain that Leyster actually studied with Hals, Haarlem’s leading artist, or worked in his studio, but she was clearly a close and successful follower of his dynamic, new style.

For all the acclaim granted Judith Leyster during her lifetime, she almost vanished from memory after her death. Today as many as 35 works are recognized as hers, but until the late 19th century her name and work were almost entirely forgotten: all her paintings were in the limbo of the “unattributed” or assigned to someone else, particularly Hals or Leyster’s husband, fellow Haarlem painter Jan Miense Molenaer. After her marriage in 1636, Leyster’s independent career became greatly circumscribed. Like the wives of many 17th-century Dutch artists, she probably managed the business side of the workshop, and the responsibilities of a growing family would have made difficult to find the long hours needed for working in oil on canvas. Perhaps tellingly, her latest known work is a silverpoint and watercolor drawing on vellum.

Leyster was returned to her proper place among Dutch 17th-century artists following an English court case in 1892. At issue was a painting [see it, link 6] that had been sold to the Louvre as a merry company by Frans Hals. Hals’ work had increased significantly in popularity and price at the end of the 19th century, when a number of impressionists, including Claude Monet, had praised his—and unknown at the time, Leyster’s—free brushwork and informal manner. A mark that was not Hals’ signature had been discovered on the painting: the initials J and L crossed by a star. The controversy aroused the interest of scholars who were soon able to link the initials to Leyster and the star to her family name.

While the casual feel of Leyster’s self-portrait departs from the formality that had been conventional for artists’ portraits, other aspects of her image remain connected to tradition. From the 16th century artists had tried to win acceptance of painting as a liberal art, promoting it as a profession, not merely a manual craft. They hoped to see the visual arts elevated to the same level as the liberal arts of literature, philosophy, and rhetoric. Painters, therefore, depicted themselves in fine clothes and with elegant demeanor, emphasizing their erudition and status. Leyster’s dress of rich fabric and her stiff lace collar—wholly unsuited for painting—aim at the same goal of celebrating her success and separating her from less sophisticated artisans. It has also been suggested that her open, “speaking” smile makes a subtle reference to the art of poetry and its relationship to painting.

Judith Leyster was born in Haarlem in 1609. Her father operated a brewery called the “Ley-ster” (lode or guide star) from which the family took its name. Very little is known about her early life or her training as an artist. It is often presumed that she studied with the prominent Haarlem history painter Frans Pietersz de Grebber, because they were mentioned together in Ampzing’s 1628 paean to Haarlem. Not long after its publication, her family moved to the town of Vreeland, near Utrecht, where Leyster would have encountered the so-called Utrecht Caravaggisti—artists who had traveled to Rome and absorbed the Italian painter’s dramatic style. Several of Leyster’s paintings do exhibit similarly strong contrasts of dark and light. However, the family was in Vreeland only briefly and had resettled near Amsterdam by the fall of 1629. Perhaps Leyster absorbed a rather altered type of Caravaggism from Frans Hals and his circle in Haarlem. She had returned there at least by November 1631 when she witnessed the baptism of one of Hals’ children.

There is no documentary evidence that Leyster studied with Hals or worked in his shop, although she clearly adopted his free manner and took on many of the same subjects. She made close adaptations of three of Hals’ works. Hals’ brother Dirk is also identified as an influence on Leyster; however, around 1629 she must have been independent of the Hals’ shops—if indeed she ever worked in them at all—since she then started to sign her works with her own distinctive mark.

In Haarlem, Leyster achieved a degree of professional success that was quite unusual for women artists of the era. After her admission to the city guild she took on three pupils (when one left her for Hals, Leyster won a court case for compensation from the student’s mother), but following her marriage to painter Jan Miense Molenaer, Leyster painted little. She and her family soon moved to Amsterdam, where they lived until 1648 when they returned to Haarlem and remained until Leyster’s death in 1660.