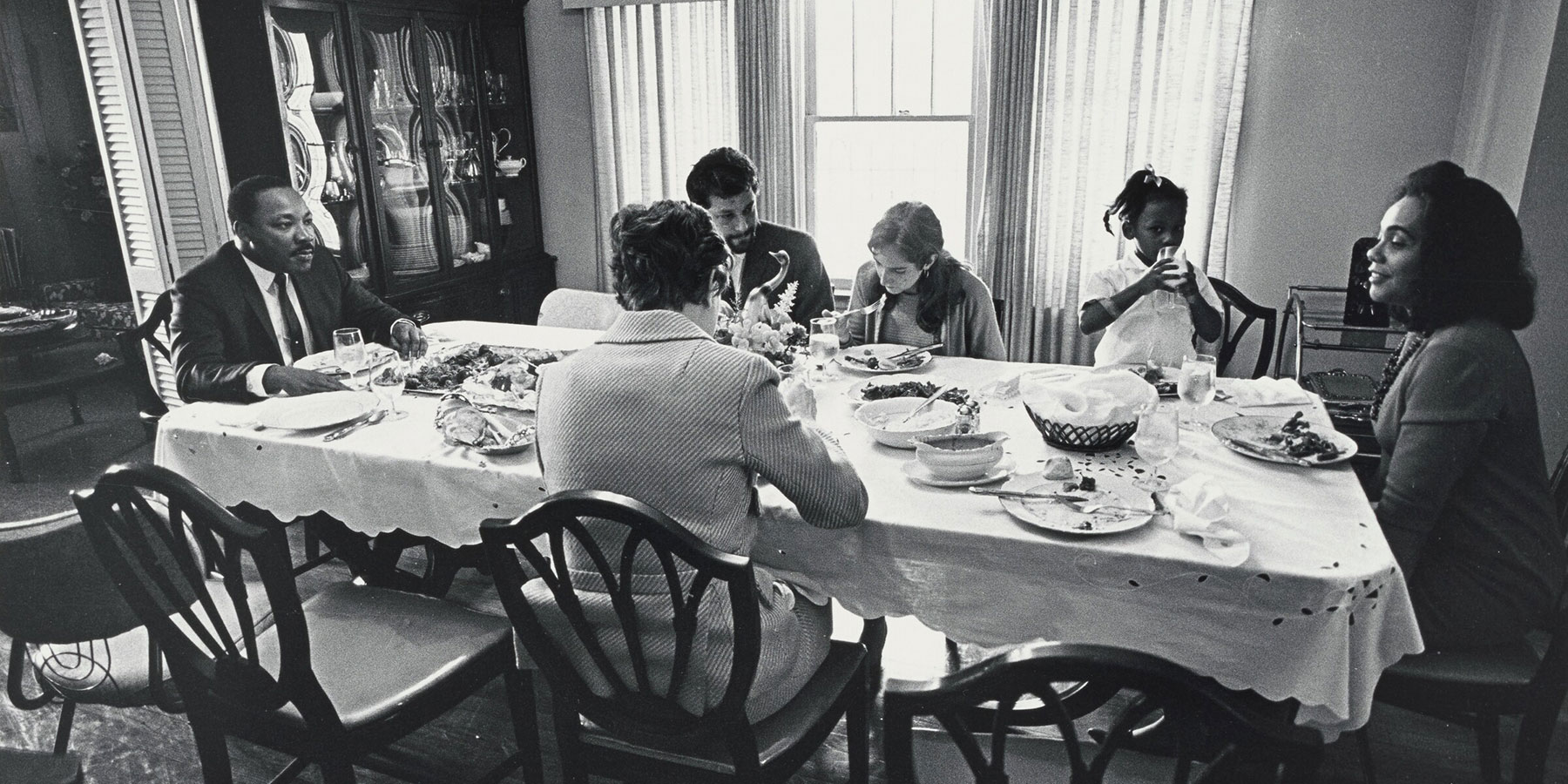 Food is a basic human need. In our Food for Thought series, James Beard Award–winning journalist, scholar, and writer Cynthia Greenlee hosts a gathering of historians, food journalists, poets, chefs, and farmers and invites them to riff on food-related works of art in our permanent collection.

The title of Benedict J. Fernandez’s photograph could have doubled as an entry on the society pages of a Black newspaper or magazine: Dr. King enjoys lunch with his family after church in Atlanta. African American publications often reported on the luncheons, bridal showers, and parties of the Black elite.

The coverage of Black social life was aspirational entertainment for some readers. But for activists, these glimpses also served the cause of social change. Representation mattered then, and it continues to matter.

Fernandez captured this moment, sometime during 1967 or 1968, during the last year of Dr. Martin Luther King Jr.’s life. King spent that year building an economic justice movement, promoting pacifism in the midst of the Vietnam War, and pleading for nonviolence in the face of urban uprisings and bloody protests.

The Moment after a Midday Meal

In the photograph, we see King and his wife, a handsome couple in their 30s. They are seated on opposite ends of a dining room table with the remains of a midday meal in front of them. Coretta Scott King, in silhouette, is smiling; she is stylish and impeccably groomed. In addition to the three guests, their daughter Bernice sits at her mother’s right hand.

The room is as well appointed as the people in it. The backs of the Sheraton-style dining chairs are shaped like lily pads. The dark wood of the chairs complements the finish of the glass-paneled china cabinet, which reveals the family’s delicate dining pieces and maybe a few heirlooms. Peeking from the top of the frame are chandelier arms, but the room is mostly brightened by sunlight, partially filtered by sheer curtains.

The meal has been eaten, but the breadbasket, gravy boat, water goblets, and cloth napkins indicate that lunch was flawlessly served. Known for his hearty appetite, King may have insisted that one of his preferred main dishes—golden fried chicken, breaded catfish, or sliced ham—be served on the silver platter.

The photograph offers a view into Black, middle-class family life, representing people who are approachable, refined, and elegant. It also challenges the viewer to accept a genteel and relaxed interracial gathering.

The unidentified guests are included by default in Fernandez’s title of “family.” Whether that is intentional or not, Black and white people breaking bread together raises the political and social impact of the image.

Gathering in King’s home—or simply being close to him—could have made someone a victim of the racist violence he attracted throughout his public life. But his guests eat in his home with ease, sitting next to his young daughter as she drinks a glass of milk.

Photography as Strategy in the Civil Rights Movement

Before Fernandez was invited to shoot intimate moments in the life of the King family, he started his career photographing the grime and dirt of New York City’s navy yards. Fernandez’s portfolio also included many of the rageful confrontations of the Civil Rights Movement that worried King. Perhaps both men found a little relief in this calm and seemingly delightful moment, as their professional lives forced them to confront racial bitterness and hostility.

The news came on, and whenever there was a flash on TV about it, he got very quiet . . . I think he was more depressed that night . . . than I’d ever seen him because the violence really got to him.

Yet this moment was also work time—for both the photographer and the preacher. And though it looks spontaneous, it may well have been planned. The Kings regularly opened their home and intimate family time to the press. King knew that photography was a key strategy: images like this one helped tell the story of Black people as equal citizens as well as promote the possibility of common ground among people of various colors.

Fernandez likely understood King’s use of photography. The Sunday lunch may have provided the perfect opportunity to support King’s mission, but the subjects and setting also helped the photographer create a somewhat heavenly image of interracial harmony.

Before They Could Break Bread in Memphis

King’s friends and family knew that mealtime was where the leader found some of his greatest joy in his truly private moments. Food nurtured and encouraged a man who experienced beatings, arrests, and death threats across the country—and in his own home. In March 1968, his friends Ralph and Juanita Abernathy hoped that a home-cooked dinner would soothe his concerns about a troubling sanitation workers’ march in Memphis.

But Juanita soon realized that King’s love for her food couldn’t overcome the heavy mood of the movement. As she remembered, “The news came on, and whenever there was a flash on TV about it, he got very quiet . . . I think he was more depressed that night . . . than I’d ever seen him because the violence really got to him.”

When King returned to Memphis the following April, he hoped to energize the strike. After delivering a rousing speech about struggle and freedom, he prepared to attend a celebratory dinner the next day. It was to feature some of his favorite foods: macaroni and cheese, sweet potatoes, greens, crowder peas, and sweet potato pie. Before he could break bread with his friends and colleagues in Memphis, he was assassinated.

More images from our collection

Benedict J. Fernandez, While he was surrounded by the crowd before his speech at the United Nations, April 1967, printed 1989, gelatin silver print, Corcoran Collection (Gift of Eastman Kodak Company and Michael S. Engl), 2016.22.97

Come back for seconds

Sign up to our newsletter for the next edition in our food series.

Discover more from our Food for Thought series.

Marcia Chatelain
Marcia Chatelain is professor of history and African American studies at Georgetown University. Her book Franchise: The Golden Arches in Black America won the Pulitzer Prize in history in 2021.