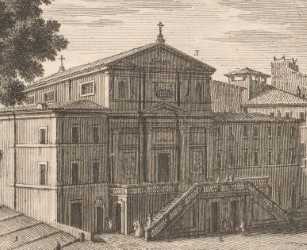 San Giuseppe dei Falegnami was founded when a branch of carpenters (the Compagnia dei Trenta Falegnami) broke from the larger Università dei Muratori et dei Falegnami in 1540. [1] The group convinced the rettore of the Church of Santa Martina to allow them to rent the Church of San Pietro in Carcere, which at the time was under the legal jurisdiction of Santa Martina. [2] The Church of San Pietro was small, subterranean, and located in a relatively lightly populated area of the city, the ancient Roman Forum, then know as the Campo Vaccino, or cattle field, a name based on its function. Despite its size and situation, the Church of San Pietro was an important pilgrimage site for several reasons. First, it was the place where the apostles Peter and Paul had been imprisoned before suffering martyrdom. Second, it was considered to have been consecrated as a church by Pope Sylvester I (reigned 314‒335) at the behest of Emperor Constantine the Great (reigned 307‒333). [3] When choosing the site, the carpenters must have counted on pilgrimage traffic to bolster their visibility in the city. In addition, they must have been attentive to economic factors. On the one hand, the small, obscure church could not command a high rent. On the other, if the site was properly managed and promoted, it could produce revenue. Indeed, the Compagnia succeeded in obtaining privileges and temporary indulgences from various popes. [4]

Throughout the remaining six decades of the sixteenth century, the carpenters worked at the site to improve the church to meet their requirements. In 1540, when they moved in, the place seemed not only inadequate for its use but also potentially impractical because of its underground location. Therefore, the carpenters decided to build a church at ground level, to be dedicated to Saint Joseph, their patron saint. Initially they built a small church of wood, the preferred material of their profession. The availability of a relatively inexpensive material and of skilled workers would have facilitated speedy construction. [5]

Even though Santa Martina ceased to be a parish church after the transfer of the Università dei Pittori there in 1588, San Giuseppe dei Falegnami remained under its longstanding jurisdiction. Because of the change in administration of Santa Martina, the carpenters tried to renegotiate their contract. In the end, after refusing to pay rent for some time, they reached an agreement with the Accademia di San Luca in 1630, when the principe was Gian Lorenzo Bernini (1598–1680) and the governatore of the Archiconfraternita di San Giuseppe was Giovanni Battista Soria (1581–1651). [6] Soria may have been successful in mediating the conflict because he had also become a member of the Accademia di San Luca. [7] The effort of the Archiconfraternita to establish jurisdictional independence from the Accademia must have spawned rumors in the period if Pompilio Totti considered the issue worth mentioning in his Ritratto di Roma moderna (1638). As documents reproduced on this website demonstrate, negotiations about certain details of the concession of the site lingered after the 1630 agreement. [8]

Étienne Dupérac’s map shows a small church with a bell tower. This must have been the first stone Church of San Giuseppe dei Falegnami built on the site, constructed in 1543‒1546, with a bell tower added in 1563. [9] Although it is San Giuseppe that is delineated, the corresponding label on the map reads “Car. S. Petri,” reflecting the importance of the site as an apostolic locus, the place where Saint Peter and Saint Paul spent the last nine months of their lives before suffering martyrdom. [10] Even later, when the new and more imposing Church of San Giuseppe dei Falegnami was complete, Giuseppe Vasi titled his engraving depicting the site San Pietro in Carcere. When the Università dei Pittori moved to the Church of Santa Martina, the carpenters’ church looked close to the way it was rendered on Dupérac’s map. Unfortunately, on the Tempesta map, which would otherwise have shown the church just before the late sixteenth-century reconstruction, the site is totally blocked by the Palazzo Senatorio on the Campidoglio.

The first stone Church of San Giuseppe was decorated by Benedetto Bramante between 1551 and 1553, principally with a painting depicting the marriage of the Virgin and with two others of episodes from the life of Saint Joseph. [11] The structure was enlarged and redecorated two decades later, between 1574 and 1578, and extended only a decade later, between 1584 and 1585. Sixtus V allowed the carpenters to build a cemetery next to the church and to use a subterranean chapel. [12] The latter privilege would lead to a four-level structure, the upper two levels constituting the Church of San Giuseppe dei Falegnami and the lower two, the church of San Pietro in Carcere. [13] The subterranean chapel, a buffer between the ancient prison space and the new church, took its form and dedication only in 1853. It received the crucifix and was consequently named the Cappella del Santissimo Crocifisso. [14]

It seems, however, that even the enlarged building was not adequate for the needs of the growing membership of the Archiconfraternita di San Giuseppe. In the summer of 1597, the Archiconfraternita decided to construct an entirely new church. Although eighteenth-century sources attribute the architectural concept to Giacomo della Porta, modern scholars, on the basis of archival evidence, have assigned the authorship of the project to Giovanni Battista Montano (1534–1621). [15] The completion date of the church is considered to be 1602, when masses began to be celebrated there. [16] Montano, like Soria, was also a member of the Accademia di San Luca, where in 1594 he gave a lecture on architecture. [17] Just as the artists had to raise funds to improve the inherited Church of Santa Martina, the carpenters relied on taxation and donations for new construction at San Giuseppe. In the summer of 1598, the Archiconfraternita approved unification with the Università dei Falegnami, the institution from which the Compagnia had split in 1540. [18] Approval came a year after discussions for a new church had been initiated, but talks may have started earlier. A plausible scenario is that the union triggered the initiative for a new building. In the end, the construction of the new church benefited from the union: the Università paid a one-time fee to be used for the erection of the new building. [19]

An illustration in Pietro Martire Felini’s Trattato (1610) shows the church not long after its completion. The Church of San Giuseppe stands on the ground-level story of the Church of San Pietro. Its facade is set a few steps back in relation to the entrance wall of the Church of San Pietro, allowing room for an open terrace. As Vasi’s eighteenth-century print shows (see thumbnail image), both the terrace and the stairs leading to the underground Church of San Pietro were subsequently fitted with balustrades. The facade is on two levels, though the separation between the two may be considered an intermediary level rather than simply a stringcourse. A similar separation between two levels can be seen in Carlo Maderno’s contemporary facade for the Church of Santa Susanna (1603). While Maderno’s facade is considered a landmark of early baroque architecture, Montano’s name barely surfaces even in specialized literature because his main specialty was carpentry. However, the facade of San Giuseppe dei Falegnami merits comment. Whereas Maderno extended a central projecting bay into the upper pediment of Santa Susanna, Montano added an unusual decorative detail to the same area of the facade of San Giuseppe, repeating the geometry of its pediment in a smaller one on either side. This detail confers an extra layer of ornament to a surface already enriched with refined stucco decorations and play of geometrical shapes (squares, rectangles, an oval window, and so on). The church has a single-nave plan, with shallow chapels on each side. After Montano’s death, Giacomo Battista Soria became the architect in charge. [20] He was responsible for the enlargement and completion of the adjacent oratory and sacristy. The interior was frescoed in phases in the following centuries, the older decoration being the work of an unknown seventeenth-century painter who was visibly inspired by Pietro da Cortona. [21]

With regard to the dedication of the church, Totti was right to question the paucity of churches in Rome dedicated to Saint Joseph (only two at that time). [22] This doubtless had to do with the problematic aspects of the figure of Saint Joseph in the economy of salvation, but the post-Tridentine policy toward him was more favorable, and the number of depictions of the saint increased considerably in the seventeenth century. Concomitantly, a new iconography was developed: a portrait type showing Joseph holding the infant Jesus. [23]

[1] Thirty carpenters decided to form a new association under the name Compagnia Trenta Falegnami (Tiberia 1971, 184). The Università dei Muratori et dei Falegnami was located in the Church of San Gregorio Magno (formerly Santa Martinella) near Porto di Ripetta, a convenient location for accessing the construction materials that were entering the city on the Tiber River through this port. See Anderson 2009, 290.

[3] For more on the location and the significance of the site of the Church of San Pietro in Carcere, see the entry devoted to it on this website.

[7] Documents on this website attest to Soria’s involvement in the Accademia in different capacities. See the entry on Giovanni Battista Soria.

[10] For this topic, see the entry on San Pietro in Carcere on this website.

[13] The four-level structure is visible in Giacomo Fontana’s engraved section of 1855.

[17] For documents concerning Montano at the Accademia, see the entry for Giovanni Battista Montano on this website. For the lecture see Missirini 1823 and Zandri 1971, 23.