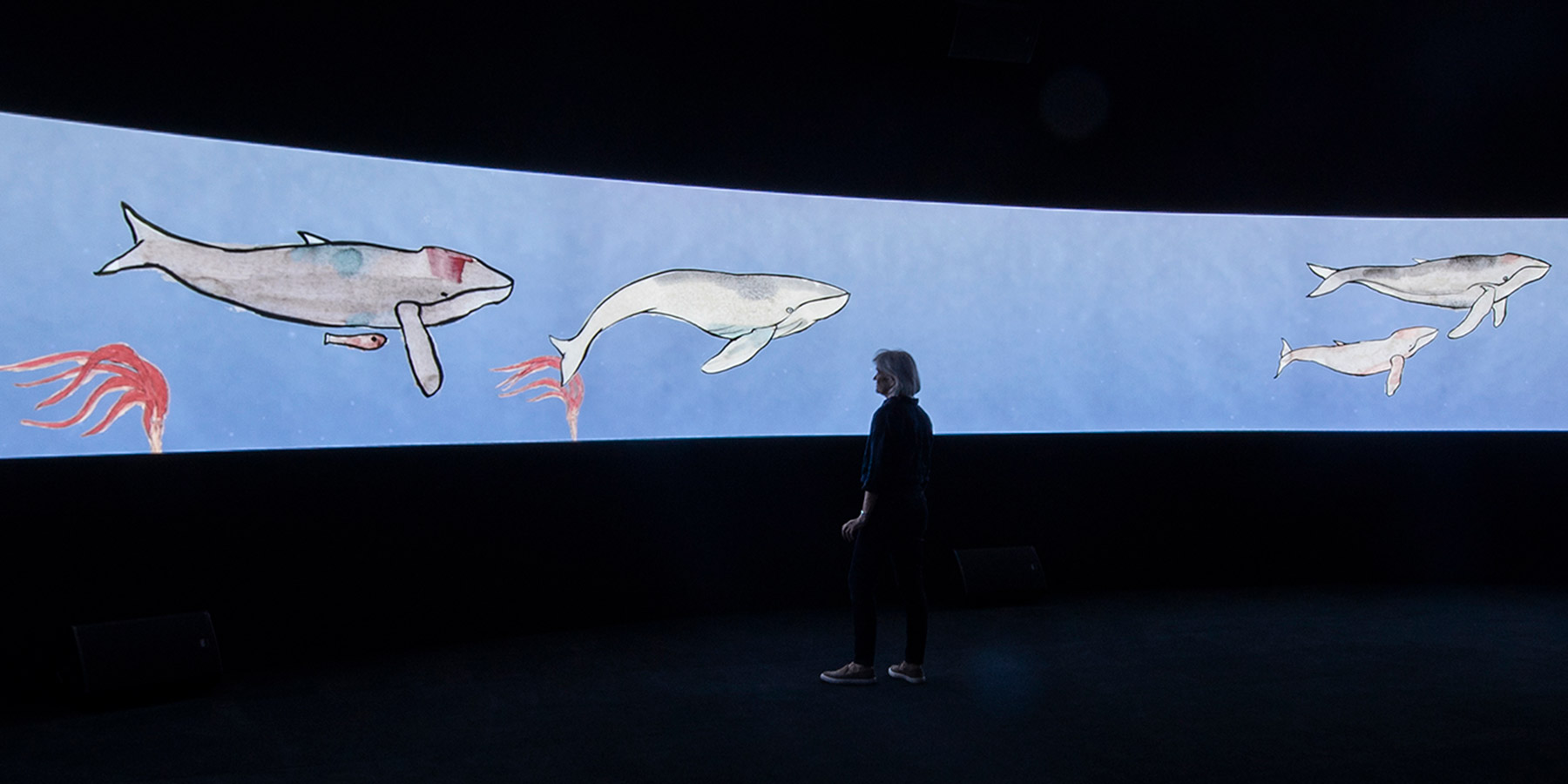 The National Gallery commissioned three artists—Avish Khebrehzadeh, Sarah Cain, and Kay Rosen—to transform temporary construction walls and empty spaces outside and inside the East Building into places for site-responsive installations. For her work, Khebrehzadeh created Seven Silent Songs, a video animation of animals and humans in nature. Taking advantage of a blank wall, she also drew Tree of Life in Blue as a symbol of hope and continuity.

In this interview, Khebrehzadeh discusses her inspiration and drawing process.

The figures in Seven Silent Songs seem to jump and flicker. How did you achieve that effect?

That is the nature of hand-drawn animation. In general, I draw five frames per second, and by doing that, you get the flickering effect. I like this because it makes the image come alive—whether an inanimate object, like a house, or an animal.

I make three frames of the fixed subject and alternate them to give the image motion. In Seven Silent Songs, you can see this in the plants in the manatee sequence or the trees in the rhino segment.

Seven Silent Songs shows human figures amid a parade of animals, such as horses, jellyfish, and birds. There is, at times, an ominous tone. What are your thoughts on that?

I don’t want the work to be purely dark, and I always add elements of absurdity in my videos to comment on senseless destruction. The tin cans that drag behind the soldiers, for instance, look funny and bounce here and there, but their loud clattering is a reminder of the chaos and unease that comes with war and endless battle. That’s what war does to people—it destroys their lives and harmony.

I include two scenes with human figures, because humans are responsible for ruining nature and for destroying each other. In another scene a character drags a whale, because we might be the last generation to see this magnificent creature in its own habitat, in its own natural surroundings.

The idea may be a little dark, but I wanted to set the animals in a happy place. I want them amongst the trees and chirping birds. At the end, a baby rhino runs after them. It’s just very hopeful that life will continue.

What do rhinos signify for you?

The rhinos in the video are migrating to escape the perils they are facing. Apart from the obvious fact that these magnificent creatures are disappearing, almost to extinction, I also see their movement as a metaphor for what we see all around the globe: people in mass marches and migrants in search for a safe and happy life for their families.

Rhinos have been a recurring theme in my work. I have also used them in my “Theater” paintings with video projections, which were based on the Theatre of the Absurd, especially Eugène Ionesco’s play Rhinoceros.

You also made a drawing directly on a wall in the East Building. What inspired you?

I drew Tree of Life in Blue as a different rendition of nature. Blue is the color of sky and water. Trees have always been part of my practice. They are an essential part of nature and are connected to animals. Trees connect the sky and heavens to the underworld, completing the cycle of life.

There’s a mention of a tree of life in the old story of the Gilgamesh. For me, trees are a symbol of continuity. I hope the creatures in Seven Silent Songs don’t vanish from Earth. I hope that we will have continuity and a connection to nature and animals.

Avish Khebrehzadeh, Tree of Life in Blue, 2021, pencil, dry pastel, and oil pastel on wall. Courtesy of the Artist.