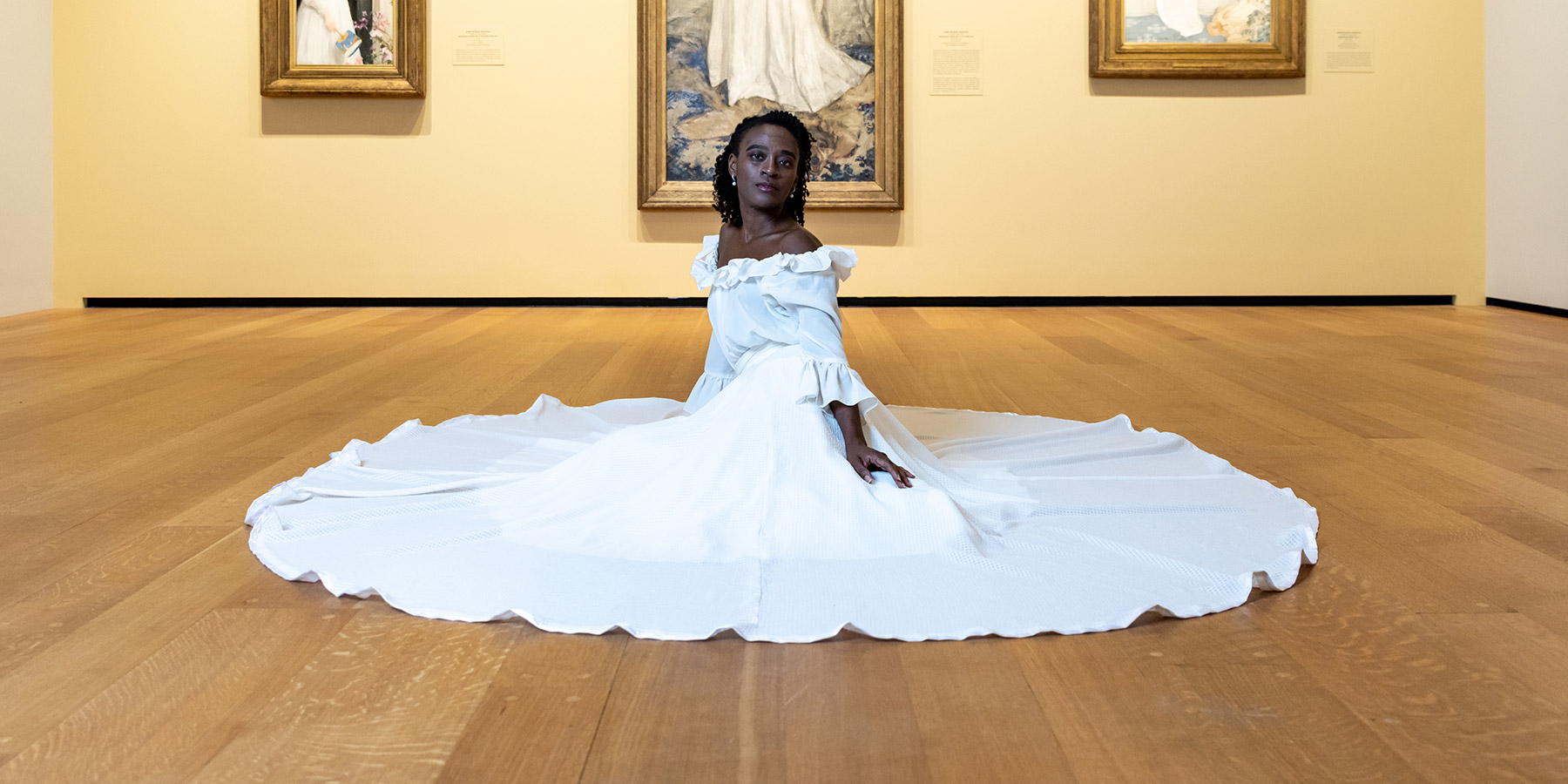 Co-Creating: An Interview with Art Models

“I can actually see the influence Joanna Hiffernan had,” Gazelle Powers says, looking around the exhibition. “I’m not sure Whistler’s work would have the impact that it does if she hadn’t been as heavily involved in the creative process.”

Powers is one of the Washington, DC–based art models who advised the National Gallery on The Woman in White: Joanna Hiffernan and James McNeill Whistler.

We usually think of Hiffernan as the iconic “woman in white”: Whistler gained international fame painting portraits of her. But Whistler and Hiffernan worked together for more than 20 years, and her contributions were wide ranging. She even helped manage Whistler’s studio and finances. Their collaboration was instrumental in making Whistler one of the most influential artists of the late 19th century.

Sheba Amante, another member of the advisory group, appreciates “being a co-creator and being recognized as one.”

At the same time, sometimes she feels “like I have to be both super inspiring and almost invisible—an empty bucket for the artist to pour their creativity into and a source of inspiration to reflect into their artwork.”

Sometimes, “you just go, you model, and you leave,” says model and fashion blogger Dani Sauter. But “the product or the artwork is always so much stronger when the model has a place in the creative process. You know, our past experiences. Ideas that we may have.”

Desi Steward studied performing art and music and has been modeling for 16 years. “It’s a collaboration, if it’s done right,” he says. “The artist may have an idea of what they want to do, but many times, it changes and evolves.”

That evolution can be exciting, according to Sauter. “Spur of the moment ideas on set are sometimes some of the most beautiful things that come to light in the whole creative process.”

Sauter describes the work she has been doing for the last eight years: “A lot of times, models are seen as just a body or a face. But when you look at the behind-the-scenes work, we kind of have our hands in everything.

“We do research, contribute ideas to the overall creative process. We help style ourselves, we help style the set. We do makeup, we do hair.”

And once all that is done, a different kind of work begins: “inspiration,” according to Steward. “We give ideas. Just by being there, sometimes. We walk into a room, and how we’re dressed or how we carry ourselves inspires the artist or photographer.”

“You have to dig deep to produce something that is an inspiration,” according to Powers. “It all shines through: the silent or quiet emotions that you have, your demeanor, your personality. It’s an all-encompassing thing,” she says.

“There’s this idea that modeling is a glamorous life. But the reality is that it’s very hard work. The actual time spent modeling might be short. But it often takes hours and hours of behind-the-scenes preparation,” says Powers.

But the actual time spent modeling might not be that short. As a life model, Amante poses for paintings and drawings. “I might hold a pose for at least two hours, but sometimes for five or six.”

She plans her days around the types of poses she’ll be doing. That might include “drinking water, resting, yoga—a lot of things that athletes and performers would do.

“You have to be aware of your body’s limits and abilities,” she says.

It’s hard work, and it’s painful, Steward says. “You would be surprised, just standing up straight, your weight distributed evenly how much it hurts after a while.”

He wonders how long Hiffernan had to pose for the “Symphony in White” paintings. He discerns some restlessness in her expression. “I can relate to that look.”


Models Shape the Future of Art

“Oftentimes models’ voices are lost,” says Sauter. “But it’s much more powerful when we have a say or some involvement.”

Steward explains that, sometimes, it’s the “subtle things” that reveal a lack of consideration. “You come into a studio, and the room is freezing.”

Other times, it’s not subtle at all. “I once worked with a photographer who felt that it was necessary to direct me physically, with his hands,” Amante recalls. “I had to repeatedly tell him to back off and eventually stop the shoot.”

Steward believes that voicing these perspectives “can change the whole dynamic for future models, artists, or photographers. It leaves a lasting impression for the people who come next.

“Collectively, that’s what we contribute to the process of creating the artwork.”

“Models have a much more important role in the artwork than just showing up,” says Powers. “This exhibition showcasing Hiffernan’s role is really key. They’re co-artists.”


You can see The Woman in White: Joanna Hiffernan and James McNeill Whistler at the National Gallery through October 10.