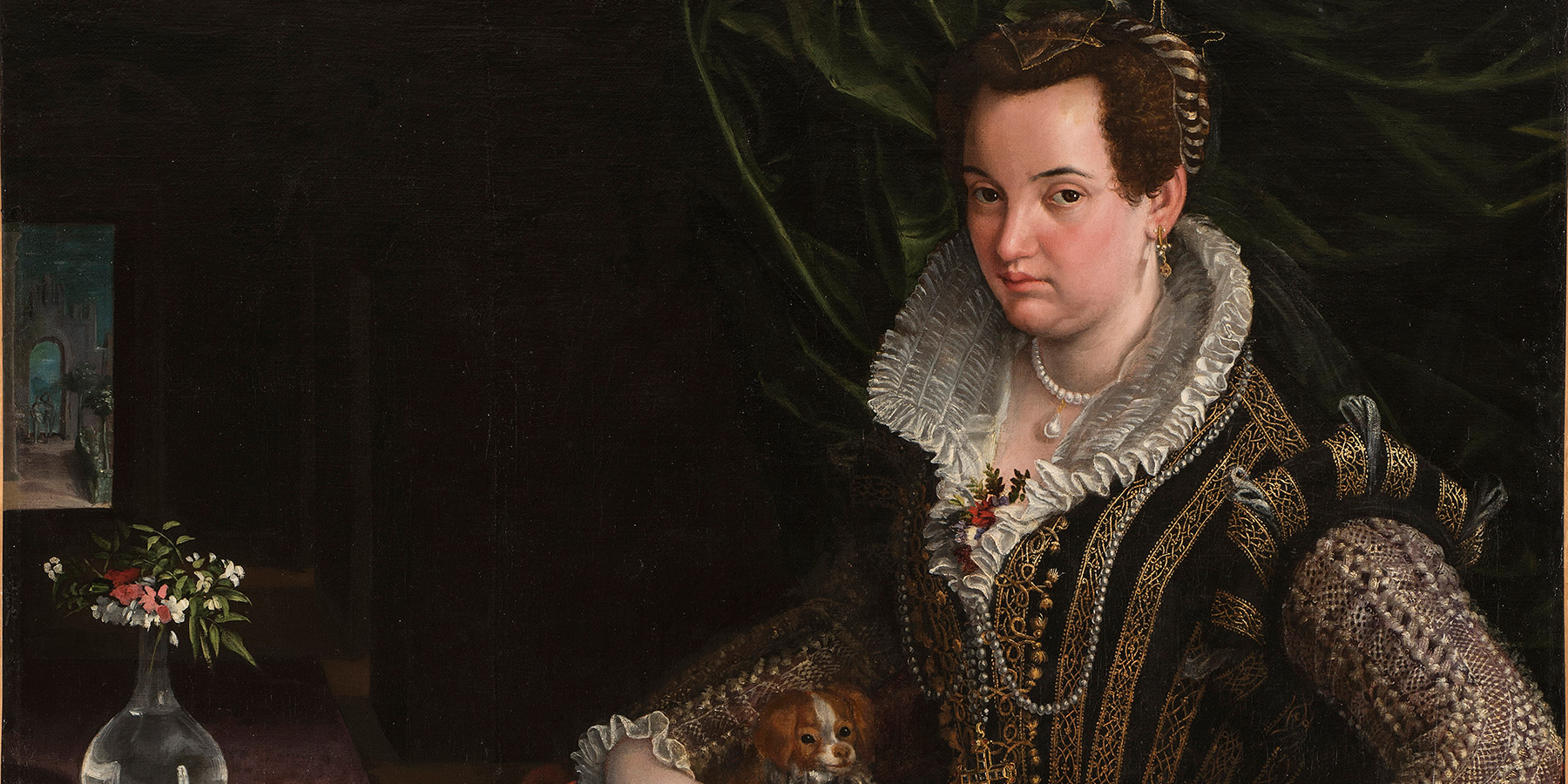 Curator and Head of Italian and Spanish Paintings

“All the ladies of the city would compete . . . to have meetings in the company of the virtuous young woman” one period source said of Lavinia Fontana—and to have their portraits painted by her hand.

We know too little about the daily lives of Italian Renaissance and baroque women artists. I often think about what it would have been like to have a portrait done by Fontana in late 1500s Bologna. I imagine that it may have gone something like this.

Costanza Alidosi, a Bolognese noblewoman of substantial years and experience, waits patiently in the antechamber of Fontana’s studio. Not wanting to be late for this greatly anticipated occasion, Costanza had rushed over with her King Charles spaniel Lucrezia in tow. She had tried for months—nay, years—to get a slot on Fontana’s calendar.

Costanza eschewed the custom of only being painted on the occasion of her betrothal or as a widow. Her husband Ridolfo Isolani, a distinguished nobleman and a close associate of the Medici family in Florence, was still alive and well. But if Lavinia Fontana could excel as a woman painter, Costanza reasoned, she could have her portrait painted simply because she desired one—and because she was curious about the artist.

As she was musing, the studio’s door flew open and a valet in fine burgundy velvet greeted her with a bow, offering a refreshment. Costanza declined, eager to meet the artist. The valet escorted her to the threshold of the studio, relieving her of an ornate gown of brocade, velvet, and silk. At her advanced age, it was too cumbersome and heavy to don except when necessary, but Costanza intended to have Fontana copy it for her portrait.

Lucrezia, who yelped once in excitement, was also there to be part of the painting. She would signify Costanza’s loyalty to her husband, even though in reality the dog had allegiance only to her mistress.

Costanza and Lucrezia cautiously entered the dimly lit studio, empty save for a woman standing at her easel. The southern light streaming into the room illuminated Lavinia Fontana’s simple dress, and unadorned face and hair.

Lavinia greeted Costanza and gestured at the red velvet chair across from her.

“I will do a study of your likeness in red and black chalk today,” the artist explained matter-of-factly. It “would take the better part of the hour” to get her countenance “just right,” Lavinia added.

“I see,” she continued, pointing to the clothes that the valet had left neatly arrayed on a divan, “that you have brought the garments and jewels you would like included in the picture.”

“Once I have your likeness down on paper,” she went on, “we must decide on the positioning of your gaze.”

Costanza nearly interrupted her, “I would like to be depicted gazing out of the painting directly. Too often, women are painted looking off into the distance. I prefer a more direct encounter with my viewers—present and future.”

Lavinia let out a short laugh. “It is always my preference to show my sitters, especially women, looking directly out of the picture. Would you mind if I also turned your head ever so slightly down? That way, you’ll gaze on the viewer from above. I never like to leave my women sitters vulnerable to the gaze of others, especially men.”

Costanza chuckled, “It seems we have a very similar vision for this portrait. I leave it entirely in your good hands to decide the rest. Do what you will with the still life elements and the background.”

After a pause, she added, “I would only request that you also capture my beloved Lucrezia.” Hearing her name, Lucrezia barked and nipped at the heels of the esteemed painter.

Lavinia smiled, “Yes, I will capture both of you now. Remember that Lucrezia will count as an extra sitting. My husband Gian Paolo Zappi handles our business affairs—he will sign the invoice and send it to your household in around three months, before the portrait is finished.”

Satisfied with this arrangement, Costanza called Lucrezia back onto her lap to be captured for posterity by Bologna’s famed woman artist.

Lavinia Fontana’s Portrait of Costanza Alidosi is currently on loan to the National Gallery while the National Museum of Women in the Arts is closed for renovation. It is on view on the Main Floor of the West Building.