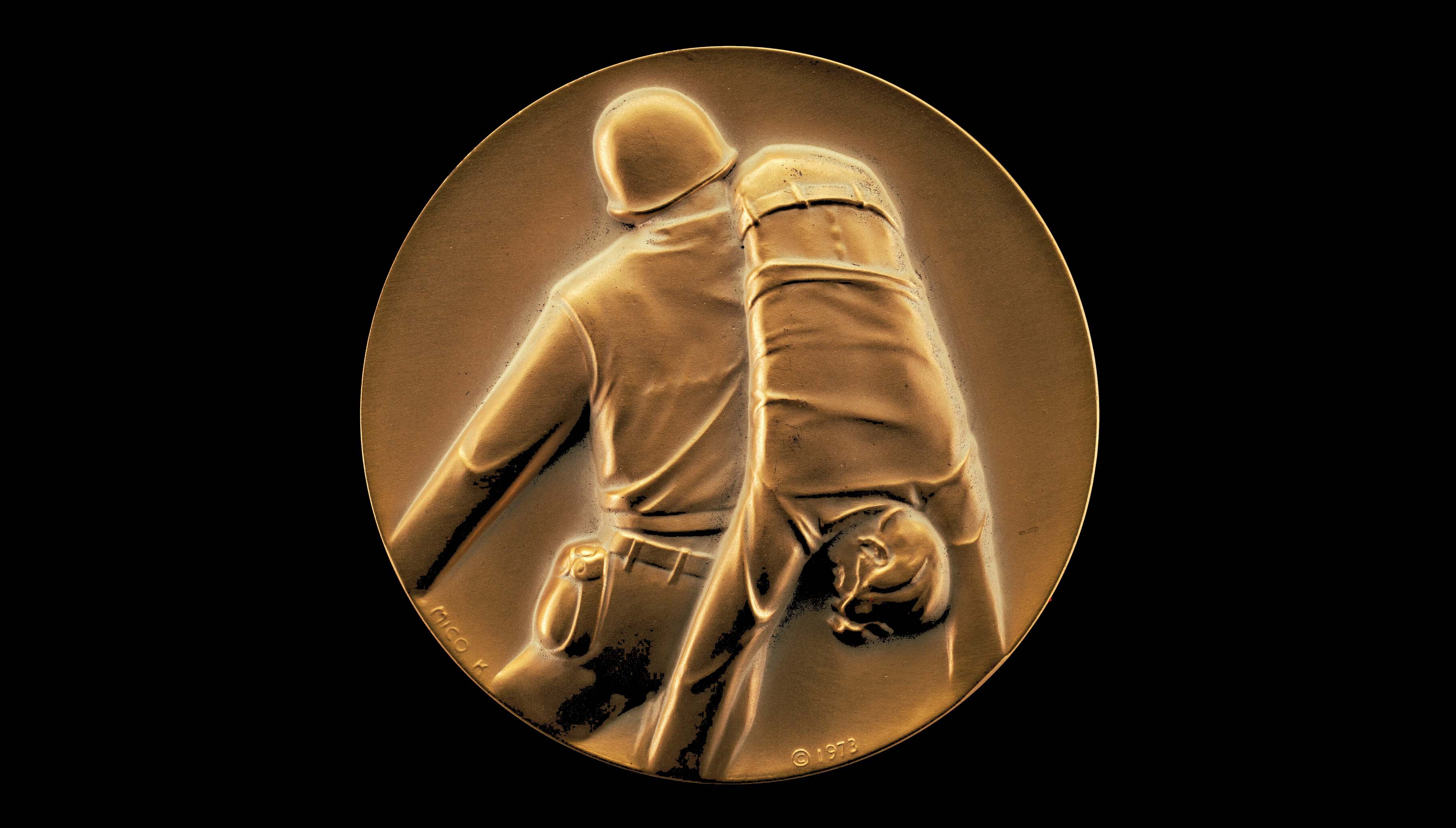 With my aunt working in a hospital emergency room during the COVID-19 pandemic, and another family member currently serving with the US Army in Afghanistan, I have been reflecting on sacrifices made by individuals in service to others.

Often, the identity of the helper is unknown to those who receive help. As we observe Memorial Day’s solemn commemoration of those who died while serving in the US armed forces, I would like to acknowledge the anonymous service given to others by sharing a medal from the collection of the National Gallery of Art.

While medals are generally thought of as awards for achievement, bravery, or service, this medal was commissioned as a work of art for collectors. The medal is bronze. Most medals created as works of art were made from bronze since antiquity, and especially during the Renaissance. Bronze is used in military decorations; it is also a material of weapons.

The medal, made by Mico Kaufman, is less than three inches in diameter but has a monumental presence. On its reverse, Soldier Carrying a Wounded Comrade, there is no background—just a blank smooth surface making the setting timeless, even while the soldier’s helmet and belted trousers anchor it to its specific time and conflict: 1973, Vietnam. The absence of a setting focuses our eye on the soldiers themselves. We see only their backs, not their faces. They could be anyone’s father or son, brother or uncle.

The man on the left carries his comrade over one shoulder. Straining under the weight, he leans in the opposite direction, his left arm held straight in counterbalance. His wounded comrade hangs down his back, arms dangling and shirt fallen to reveal his spine.

In an image otherwise sparse in detail, the vertebrae of the wounded soldier express the vulnerability of the human body. No specific wound is depicted—and of course, some wounds of war are invisible. Instead the artist has chosen to represent the compassion and camaraderie between brothers in arms. It is an intimate aspect of war recognizable by any soldier.

According to the artist, the outline of the soldiers’ arms represents the three spokes of the peace symbol used to protest the Vietnam War. The medal’s obverse, or front, shows a long-haired young man playing a guitar, emblematic of the era’s peace protests. With this figure, Kaufman expresses within one object a society divided over war—two sides of the same coin.

Mico Kaufman knew about suffering and war from his own life. Born in Romania in 1924, he survived three years’ imprisonment in a Nazi concentration camp where he endured hard labor. Following a long hospital recuperation, he went to Rome to study art, before immigrating to the United States in 1951, becoming a US citizen in 1956. He designed the inaugural medals of US presidents Gerald Ford, Ronald Reagan, and George H. W. Bush, and received recognition “for his great ability to humanize the official and to universalize the personal”—something this medal does with power, simplicity, and intimacy.

A medal is personal, something that can be carried in a pocket or held in the hand. Art invites us to see ourselves in it, to connect to the fabric of our common experience. This medal invites reflection and gratitude for those who have served, and who presently serve, even where their names are not known.