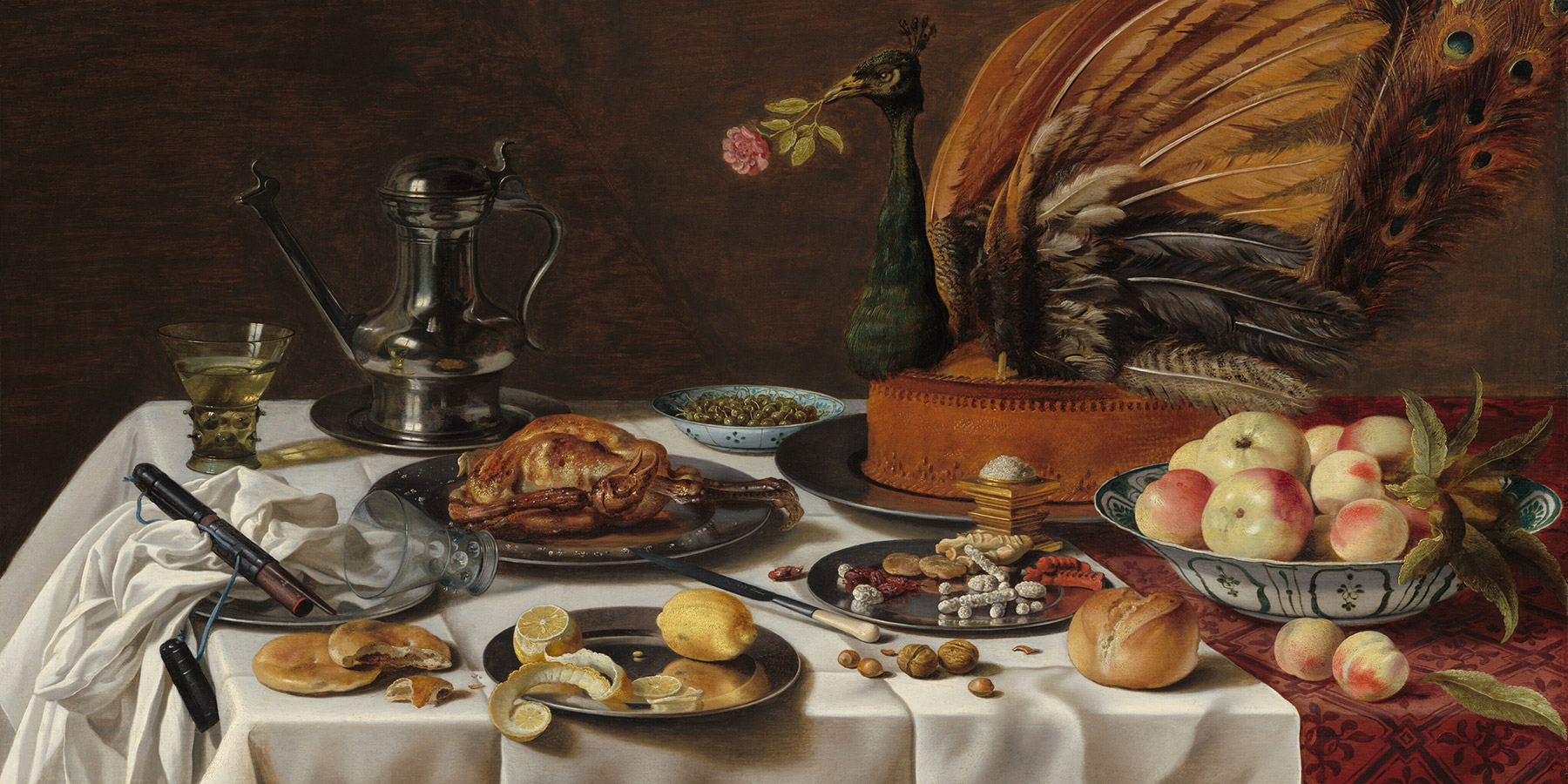 The Deadly Business of the Dutch Quest for Salt

After hosting the Afro-Atlantic Histories exhibition, we are inspired to explore its themes—including colonialism, diaspora, identity, and representation—within our own collection.

Did you know that sitting in your kitchen right now is a mineral that was once so precious to the 17th-century Dutch that battles were fought over it, lives were lost for it, and an economy depended on it?

Look closely at Pieter Claesz’s Still Life with Peacock Pie or many other tabletop paintings from that period and you will see it there. Given pride of place, cradled in a gold or silver pedestal all its own, rising above plates of partially eaten foods, half-drunk glasses of beer, oyster shells, peeled lemons, and precariously balanced knives, there is salt.

Our modern eyes might easily overlook the small, white, granular heaps that so often appear in these sumptuous foodscapes. In Claesz’s painting, the magnificent pie decorated with the fowl’s own feathers and gullet—a delicacy only served at special occasions—takes center stage.

Complementing this spectacular presentation piece, complete with pink rose in the peacock’s beak, are a cooked bird, olives, lemons, breads, peaches, nuts, and an array of sugary treats. Presented in beautifully rendered pewter platters and Chinese porcelain bowls, most of these foods were also delicacies, imported from foreign lands. But of them all, salt may have been the most consequential.

The Global Search for Salt

The Dutch had an absolute need for salt. They used it to produce butter, cheese, pocked meat, bacon—and to preserve food. It was also essential in packing herring, the backbone of the Dutch fishing industry.

Herring ships used salt to process their catch at sea, allowing them to remain out longer and increasing the range of the fisheries. This helped the Dutch establish a herring fishing empire that formed part of their nation’s economic base.

Up until 1500, the Dutch excavated salt by digging up large areas of sea-soaked turf in the Netherlands. They then began importing raw sea and rock salt from nearby Germany, France, Spain, and Portugal.

And then in the 16th century, they discovered the salt flats of the Cape Verde Islands, which the Portuguese, who first settled there in the 1490s, called the “Salt Islands.”

What began with one or two ships around 1530 expanded to 36 ships exporting salt from the region by the end of the century. As demand continued to skyrocket into the 1600s, the industry took on a new level of complexity with the founding in 1621 of the Dutch West India Company.

Governed by a board representing various regions of the Netherlands, this charter company of Dutch merchants and traffickers of enslaved people, as well as foreign investors, was granted a monopoly over the Middle Passage slave trade, Brazil, the Caribbean, and North America.

To accommodate the boom, the Dutch enslaved the local people in Cape Verde. Extracting the mineral was a punishing process: often in sweltering heat, workers were forced to wear wooden shoes and iron bars to break the hard salt under the water’s surface.

The toll of the labor was so great that it often killed them, and a large cemetery was established near the salt flats. Due to its strategic location between Africa and Americas, Cape Verde eventually became a hub for the transatlantic slave trade: up to 3,000 enslaved adults and children from Cape Verde were sold yearly until the mid-19th century.

Around this time, the Dutch also found a great salt sea on Punto de Araya in Venezuela. Between 1600 and 1605, the number of Dutch ships that loaded up there went from 30–40 per year to over 750.

As they fanned out, the Dutch took over the Caribbean islands of Curaçao, Aruba, Bonaire, and later Sint-Maarten, bringing enslaved people from Africa to collect the salt there and then exporting it all over North America and back to Europe.

With the establishment of these colonies from the 16th through the early 19th century, salt from the Caribbean flowed north to the massive cod fisheries of Newfoundland and New England.

Those fisheries soon became the largest new source of animal protein in the world. And as the cheapest protein available, the cod salted there flowed back south to become a mainstay of the diet of enslaved workers.

To this day, cod features prominently in the national cuisines of the islands of the West Indies, even though it is not native to the Caribbean and the closest cod fishery is more than 2,000 miles away.

“One can do better on earth without gold, than without salt,” the Dutch poet Jacob Cats wrote in 1636. And, indeed, salt’s cultural and economic value is not hidden in Dutch still life paintings of the 17th century. But what may not be as evident is its impact—on the Dutch and on the people and places they colonized.