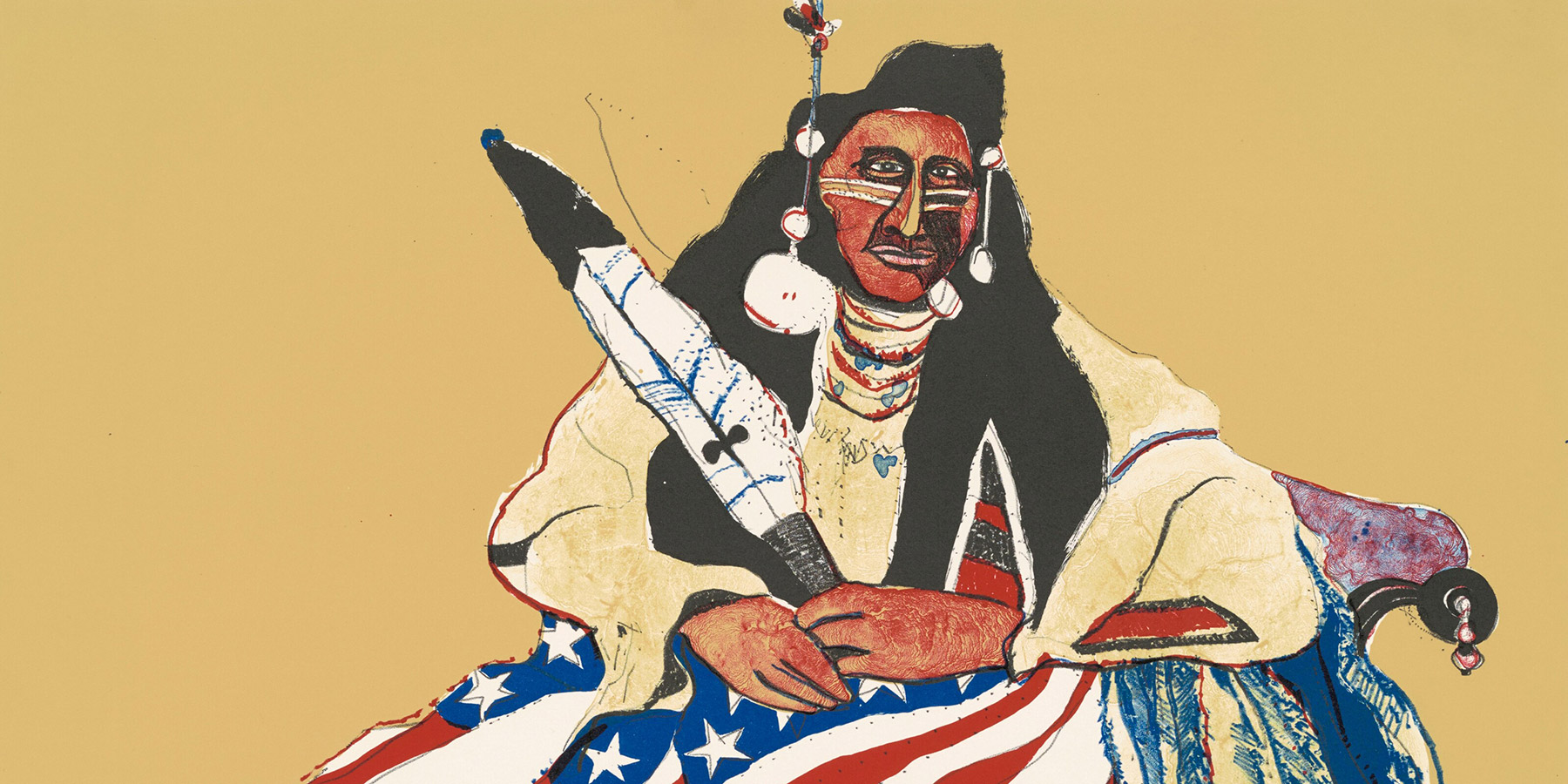 Five Artworks to Talk about Protest

How do artists both document protest and create art as protest? Use these works from our collection and discussion questions to start conversations about protest or refer to them as a guide to explore today’s issues.

For more information and additional works on this topic, explore the Uncovering America module Activism and Protest.

Left Palm and Knife Edge is part of Jenny Holzer’s Redaction Series—works that feature reproductions of declassified US government documents related to military activity in the Middle East. This redacted handprint is from a US soldier who was charged with detainee abuse.

Holzer said she used painted canvases as the ground for the series because “people take [paintings] seriously,” more so than declassified information. This work also functions as a form of protest against torture for the artist.

Do you agree or disagree with Holzer and her statements? Why or why not?

After serving in the US Air Force during the Vietnam War, Rupert García studied art on the GI Bill at San Francisco State College. He soon became involved in activist concerns including the anti-war movement, the struggle for civil rights, and labor advocacy led by the United Farm Workers. In this print, García draws attention to the fight against apartheid in South Africa. He calls for the release of African National Congress (ANC) leader Nelson Mandela. The South African government had declared the ANC a guerilla organization and in 1964 sentenced Mandela to life in prison.

Is García’s work an effective form of protest? Why or why not? How can you use art to advocate for issues that are important to you?

Fritz Scholder, an enrolled member of the indigenous Luiseño tribes of southern California, created his “Indian paintings” in the 1960s and 1970s after he vowed never to paint Indians. His provocative works, which have been described as revelatory, ugly, clichéd, and realistic, coincided with the American Indian Movement of the 1970s, which advocated for the civil rights of Native Americans.

The Lorilland Tobacco Company commissioned Scholder and other artists to create prints in honor of the bicentennial of the United States in 1976. Scholder’s contribution to the series, Bicentennial Indian, both challenges stereotypical depictions of American Indians through the inclusion of the US flag and emphasizes the enduring presence of indigenous communities.

How would you describe Scholder’s depiction of this figure? What statement do you think the artist was making?

During summer 1968, activists with the Poor People’s Campaign took over the National Mall in Washington, DC, to raise awareness of the widespread effects of poverty. Assassinated a few months earlier, Dr. Martin Luther King Jr. had been a central figure in this campaign, which sought a living wage for all. On June 19, more than 150,000 people gathered on the National Mall to support the movement’s goals, culminating with a Solidarity Day rally in celebration of Juneteenth, the historical date of emancipation. Benedict J. Fernandez took this quiet photo on that significant day.

What might the photographer want you to know? What story or stories are being told here? What effect do the slogans “Honor King: End Racism!” and “I Am a Man” have on you?

Congressman John Lewis befriended photographer Danny Lyon in the 1960s, when they were both working with the Student Nonviolent Coordinating Committee (SNCC), an organization that aimed to desegregate the United States. In 2002 Lewis described this picture, in which National Guard troops dragged activist Clifford Vaughs out of a sit-in.

We had discussions about the role of photography in SNCC, but it was only later that I really understood what we were trying to do. . . . We were trying to put a face on the movement, to make it real, to make it very plain and simple to ordinary people. . . . Many people across the country saw all these unbelievable photographs in newspapers or magazines and were inspired by them. . . . They became a tool to educate, inspire, and enlighten the public.

How does this work make you feel? What perspective on the civil rights movement does this photo communicate?