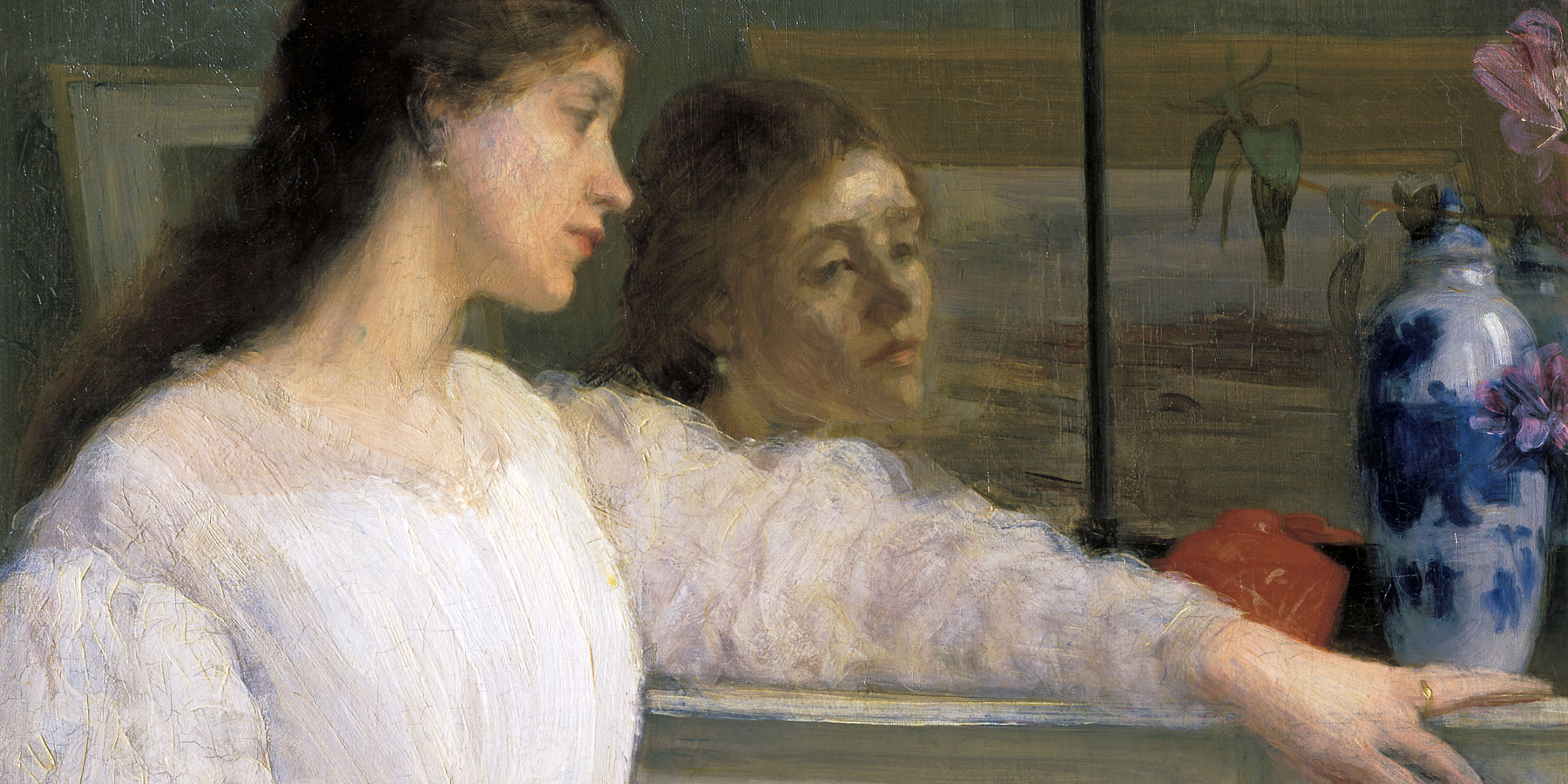 As an art student in Paris in the mid-1850s, learned from his teacher and fellow artist, Charles Gleyre, that black was a “universal harmonizer” and the basis for tone. In other words, its addition could lend richness and balance to every color. That idea stayed with him all his life: every Whistler painting has at least a tiny amount of black in every brushstroke, from the portraits that he called “Harmonies” to his “Symphonies in White.” And when it comes to Whistler’s whites, every area he painted includes not only black but also other colors, which he chose with care. It’s one aspect of his process that gives life and subtlety to his portraits.

Whistler painted several women wearing white in the 1860s, all of them with Joanna Hiffernan as the model. Hiffernan was his partner in that decade—sometimes known as “Mrs. Whistler,” although they didn’t marry. She played a significant role in his life until she died in 1886.

Symphony in White, No. 2: The Little White Girl is the painting of Hiffernan that I know best. It belongs to Tate Britain, where I am a senior conservation scientist, and I’ve had several opportunities to examine it over the years. In 2021, a colleague skilfully removed a very old and rather lemony yellow varnish.

As a result of this treatment, viewers today can really see these marvelous, multitone whites the way Whistler saw them when he first painted Hiffernan in a white dress in their house on Lindsey Row, in London’s Chelsea neighborhood. We scientists enjoy looking at them, too.

Joanna Hiffernan in a Room in Lindsey Row

The building still exists (I once visited it). The fireplace is in a small but beautifully proportioned room with several windows. When the couple lived there, the view over the river was of smoking factory chimneys. London is overcast and cloudy for days at a time, even before the smoke makes everything gloomier. So the subtle shades of white Whistler saw in Hiffernan’s dress can’t only reflect what was outdoors—they must have come from colors in the room. The highly glazed blue-and-white Chinese vase throws its color onto the filmy white fabric at her wrist. Hiffernan’s rosy cheek and her arm resting on the mantelpiece cast their colors onto her bodice.

The framed paintings between the windows, visible in the yellowed reflection of the mirror above the mantel, hang on a dull greenish wall. We know the couple had very modern tastes, so rather than the dark fabrics and dark wood more typical of a “Victorian” interior, we can imagine the room filled with mid- or light-toned furniture. The bright blue, white, and scarlet of the Chinese ceramics and the pale pink of the flowers hint at bright, colorful upholstery on the chairs that were most likely somewhere in the room.

Hiffernan wears a dress that requires no corset or crinoline—progressive for the Victorian era. Made of a light muslin fabric, it falls in slight ripples, visible against the dark grate. Whistler’s “white” paint here actually includes red lake, yellow ochre, fine particles of blue ultramarine, and bone black, painted over a thinner layer of mixed dark gray for the grate.

The portrait was painted in late winter or early spring, and it’s a lightweight dress for the time of year. Obviously, the fire wasn’t lit, so Hiffernan probably felt chilly as she posed for hours, leaning one arm on the cool marble mantelpiece. Her skin shows through the ruched fabric of the sleeves, though in fact we know that Whistler achieved this effect by painting her flesh over the fabric.

The Colors in the White Dress

The “white” of the dress contains a range of pigments: crimson red lake, red ochre, dull opaque yellow, ultramarine (the color of lapis lazuli jewelry), and the big craggy particles of bluish bone black that Whistler added to all his paint, no matter the tone.

Whistler used crimson red lake to paint Hiffernan’s pale complexion, which sets off her chestnut hair and greenish eyes. More of this crimson color shows up in the white-lined bodice—likely because the south light from the windows caught and warmed it as Whistler was painting.

The pink azaleas cast their own reflection onto the front of Hiffernan’s skirt, but the fabric toward the back caught less; Whistler added more blue there.

The yellow we see might have been cast by a rug or a wooden floor. The fan in Hiffernan’s hand cast a simple dark shadow onto the white skirt because it blocked the light from the windows.

“The Little White Girl” is part of the trio of Whistler paintings known as “Symphonies in White.” But when we look closely, we can see this one as a carefully orchestrated, brilliantly executed study in red, blue, yellow, green, black, and white, with endless nuances in between.

You can see “The Little White Girl” in the exhibition The Woman in White: Joanna Hiffernan and James McNeill Whistler at the National Gallery through October 10.