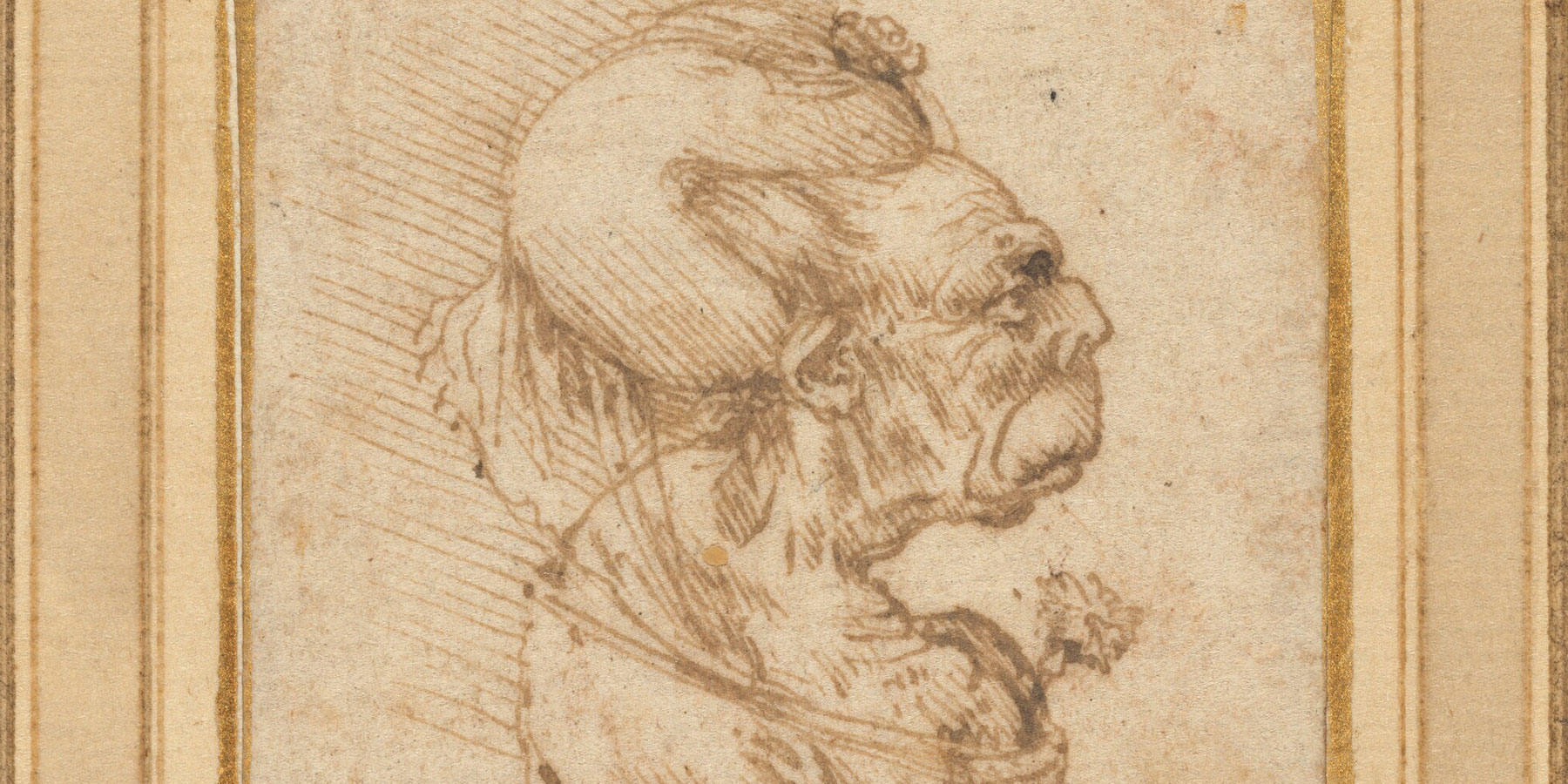 It's tiny. A mere 2 ½ by 2 inches, Leonardo da Vinci’s Grotesque Head of an Old Woman, which the National Gallery recently acquired, packs a visual punch in what seems like an impossibly small space. Wrinkled skin, a prominent nose, and a small chin come alive in just a few strokes of an ink pen. Nearly imperceptible lines stand in for the small folds of the upper lip to suggest a lack of teeth.

The drawing, a gift from Dian Woodner, is one of a series of about 30 studies. Identical in small format, style, and technique, they are from a period when Leonardo was deep into studying human faces and bodies. The artist owned an early treatise  on physiognomy and wrote about it in his notebooks.

Andrew W. Mellon Senior Curator of Prints and Drawings Jonathan Bober tells us that Leonardo drew a lot of “grotesque” heads. But each one is unique. Like the others, the National Gallery’s appears to have been a stand-alone exercise (rather than a sketch for a painting).

“Drawing helped to inform the unprecedented range and subtlety of human expression in Leonardo’s paintings,” Bober says. “He was the first European artist to use drawing to go beyond idealized figure types, to attempt minute physical variations and reach beyond surface appearance to evoke personality and convey character.”

These drawings influenced artists across Europe, even north of the Alps. This woman appears in several contemporary copies—the National Gallery owns one by Francesco Melzi, Leonardo’s closest follower.

Leonardo’s old woman stands in stark contrast to his Ginevra de’ Benci, the only one of his paintings in the Americas and one of the stars of the National Gallery’s Italian Renaissance collection.

Bober and other curators believe the painting of 16-year-old Ginevra to be an engagement portrait and one of Leonardo’s earliest experiments with the then-new medium of oil paint. The pale, porcelain complexion and delicately curly hair we see supposedly belonged to the real Ginevra. The woman in the drawing, on the other hand, like other “grotesques,” is imaginary.

The carnation at the old woman’s breast—a traditional symbol of love and betrothal or marriage—may indicate that Leonardo intended this drawing as a caricature of exactly the type of portrait he made of Ginevra. In his copy, Melzi paired the woman with an old man—perhaps for the same reason.

“Leonardo was inspired by the monstrous, the astounding, and the unusual—and the beautiful and the sublime,” says Bober. “These two contrasting aspects coexisted in his mind and constitute two of the major spheres around which his studies of the human condition turned.”

Leonardo was the first artist to explore facial appearance for its own sake. It is doubtful that these drawings were caricatures of actual individuals. Rather, they represent types. Some suggest an attempt to capture the physical manifestation of an emotion and relate to figures in his paintings. Most, however, seem to arise from the imagination, with no specific source or purpose. This pair of studies was surely created in Leonardo’s studio, probably by his most faithful pupil, Francesco Melzi.

Pieter van der Heyden, after Pieter Bruegel the Elder, The Ass at School, 1557, engraving, Gift of Mrs. Jane C. Carey as an addition to the Addie Burr Clark Memorial Collection, 1958

The inscription says, in essence, you can send an ass to school but it will not come back a horse.

In Greek mythology, Silenus was the son of Pan, guardian of the young Bacchus and steady companion in his entourage. In Renaissance art he is usually depicted as an older human figure inebriated and mocked by satyrs, and thus a comical emblem of what happens when man surrenders reason to the senses. In René Boyvin’s earlier interpretation of a similar subject, hanging on this wall, Bacchus is an idealized figure, impaired but imposing. A half-century later, with a naturalism as accurate as it is funny, Ribera presents Silenus as a sloppy drunk, plied by satyrs and ridiculed even by a donkey.

The playbill in the lower left reveals that the troupe is holding its last performance before a new law takes effect banning unlicensed theater. Much of the humor here derives from contrasts between the actresses’ roles as Roman goddesses and the earthy realities of their lives. The central figure, playing the chaste goddess Diana, strikes a pose reminiscent of classical sculptures depicting Diana as a huntress. Here the lack of bow and arrow renders the gesture meaningless and the actress uses one hand to hitch up her shift to her thighs. Contemporary associations of actresses with prostitution would have added to the irony of her role. All around Diana humble props and activities strip away the illusions of the stage: in the lower right, for example, Juno practices her lines, her book resting on a makeshift noisemaker, while another goddess mends her stocking.

This is one of a series of anamorphoses — distorted images that are intelligible only when seen reflected in a cylindrical mirror. An architect and leading scenographer in mid-eighteenth-century Venice, Costa pursued related theoretical interests, publishing a treatise on perspective. The etchings in this series represent a playful application of that study. Here two old men are stooped over tomes, one a book of geometric figures, with the drawing instruments beside it — a pun on the act of creating and viewing such images.

James Gillray, Wierd-Sisters; Ministers of Darkness; Minions of the Moon, 1791, etching, engraving and aquatint, with publisher's hand-coloring and inscriptions by Gillray, Anonymous Gift, 2017

This parody of Henry Fuseli’s painting, Weird Sisters (misspelled “Wierd” in the print), alludes to the bout of madness suffered by King George III (1738 – 1820). He appears as the dark and waning face of the moon, while his wife, Queen Charlotte, is shown on the bright and waxing side. Although Fuseli’s painting depicts the three witches from Macbeth, Gillray transformed the figures into three politicians — identified in this impression by an inscription in Gillray’s own hand — who watch anxiously to see whether the king’s health will return. Their gestures and tense expressions betray their fear that the king will be declared unfit to rule and the Prince of Wales, their opponent, will replace him.

Like many of the prints from Los Caprichos (caprices), this image relies in part on a pun: the Spanish word desplumar, “to pluck,” has the same connotations that “to fleece” has in English. These prostitutes have finished fleecing their customers and are shooing them out of the way in anticipation of new clients. Their baldness, a further play on desplumar, may also mean they are suffering from syphilis, which was associated with hair loss.

Pop artist Richard Hamilton’s interest in household appliances takes a biting comedic turn in The critic laughs. This glossy print plays on a hand-size sculpture by Jasper Johns, The Critic Smiles (1959), in which four teeth replace the bristles of a toothbrush. (“A smile involves baring the teeth,” Johns noted.) Hamilton brings the “smiling” critic into the electric age by showing a set of dentures mounted on a Braun toothbrush, suggesting that the laughing critic is, in fact, toothless.

Jim and Tammy Faye Bakker were televangelist superstars who rose to fame in the 1970s. By 1987, however, when Chicago artist Roger Brown created this image, their evangelical empire was crumbling amid sex and embezzlement scandals. Positioning the Bakkers on what appears to be a theater or television stage, Brown conveys the message that the coiffed and makeup-caked couple had become the stars of a personal, less-than-godly soap opera.