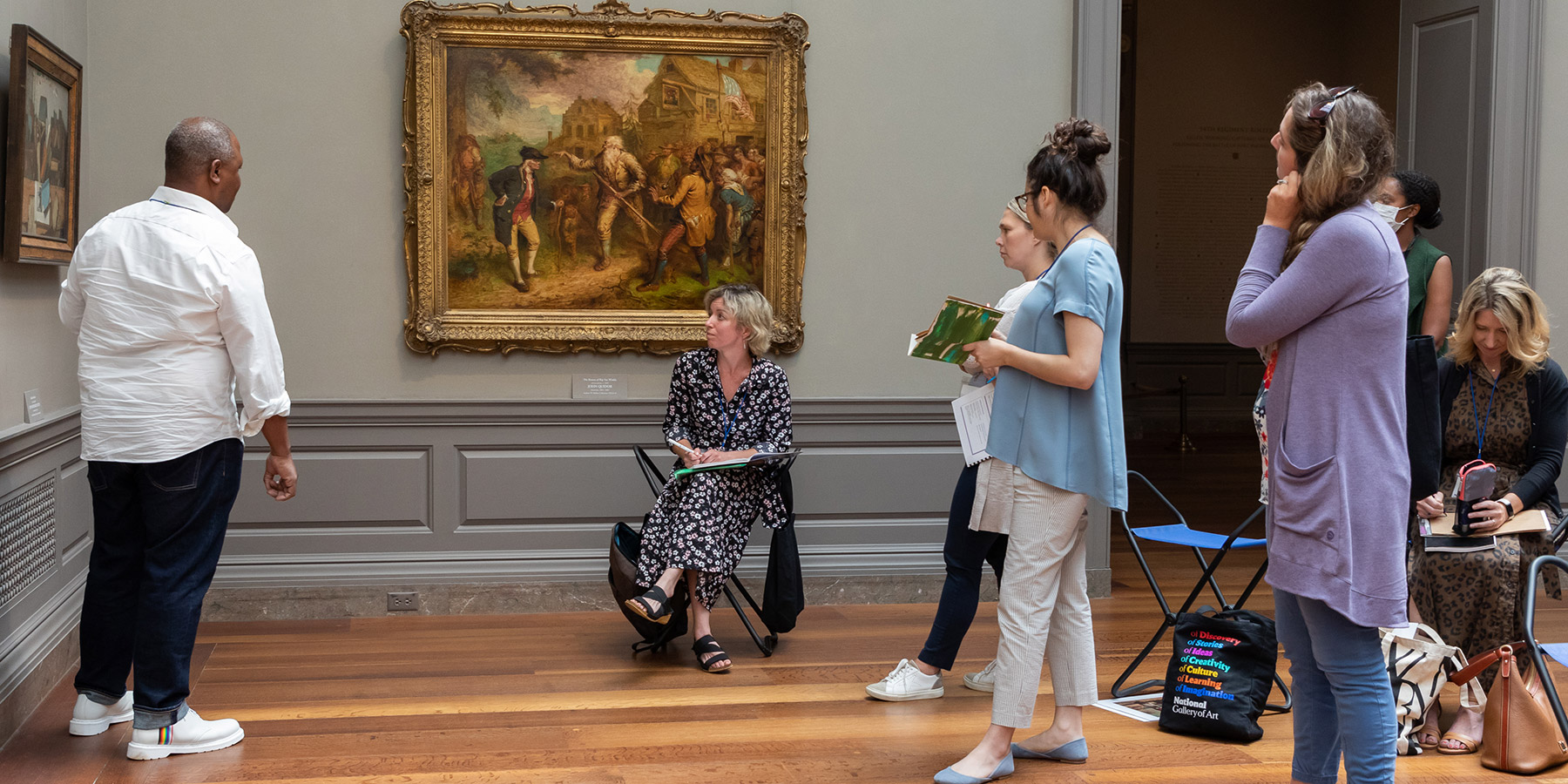 Teaching Art in a Time of War

“At first during the Summer Institute, I was connecting every work of art to war. It was only after hearing the perspectives of others that I was able to depart from those thoughts and see things differently,” said Hanna Rudyck.

Rudyck, 48, had traveled from her temporary quarters in Berlin to join 68 fellow teachers from the United States and abroad. In July they attended in person the 2022 Summer Institute for Educators, a teacher training program the National Gallery has held annually since 1989. The institute has prepared hundreds of elementary and secondary school teachers, administrators, and counselors to use museum resources to instruct and inspire their students.

During the institute, Rudyck participated in lectures, discussions, and tours. Meanwhile, the fate of her native country remained foremost in her mind. “I am thinking of survival and revival—of Ukrainians. Ukrainian culture, Ukrainian museums, Ukrainian kids. The war has wreaked a lot of damage on human life and cultural heritage.”

All of Ukraine Is at Great Risk

Following the threat of further bombardment by Russian military forces, Rudyck left her native city of Kyiv in February with her two youngest children, ages seven and 14, and relocated to the city of Lviv in western Ukraine. But that city too was shelled. She and her children then fled to Berlin.

Today the Khanenko’s vast, late-19th-century building, once the private home of wealthy philanthropists, stands nearly empty. But in a display of Ukrainian resilience, in June, the museum opened “Walls and Shadows,” a public tour of the empty building—“a work of art in itself,” Rudyck says. And on August 10, the first exhibition opened in the vacant museum: Little Soldiers of Invasion by contemporary Ukrainian artist Oleh Kalashnik on the experience of war.

The war has touched Rudyck in countless, profoundly personal ways. Some of her relatives were among the Ukrainians trapped in the port city of Mariupol during its three-month siege and bombardment this past spring. “They lived in a basement for weeks, no light, no heat. It was emotionally as well as physically punishing.” Ultimately her relatives were able to escape when a humanitarian corridor was briefly opened. The United Nations has reported that nearly 90 percent of the city’s building are in ruins.

“There are atrocities committed in my country every day,” Rudyck declares. “All of Ukraine is at great risk.” She describes the Russian military in no uncertain terms. She calls them “terrorists.”

Museums: Symbols of a Better Future

“I was grateful for the chance to come to the National Gallery to experience the Summer Institute in person,” Rudyck said during a recent phone conversation from Berlin. “I was able to refine my critical thinking skills and social-emotional learning. And this is important, to learn new ways of thinking in order to work toward a better future.”

In her view, museums remain agents of social change, living symbols of that better future. “To me, museums are instruments of happiness. They should serve to make society more harmonious.”

“Connecting with art makes you expand your own world and broaden your perspectives,” she says. “By thinking outside of ourselves, we have a chance to become more humble, more generous, more empathic . . . The role of a museum educator is to ignite this power in others. Empower an individual and we can empower a society.”

At the Khanenko, Rudyck’s educational efforts included working with families, children with special needs, and homeless people, as well as developing related programs for teachers. In Berlin, she has been awarded a scholarship to do research at the Museum of Islamic Art. She is now working on a “toolkit of ideas” for museum professionals. It focuses on histories of colonization and the search for justice. After the war ends, she hopes the toolkit will result in an exhibition at the Khanenko as “we reclaim our Ukrainian identity.”

Rudyck offers a hopeful assessment of the present situation in Ukraine. “A time of peace will come, a time of rebirth and a big leap forward.”

“We are strong in spirit.”

Banner: Hanna Rudyck and other participants during the 2022 Summer Institute for Educators at the National Gallery