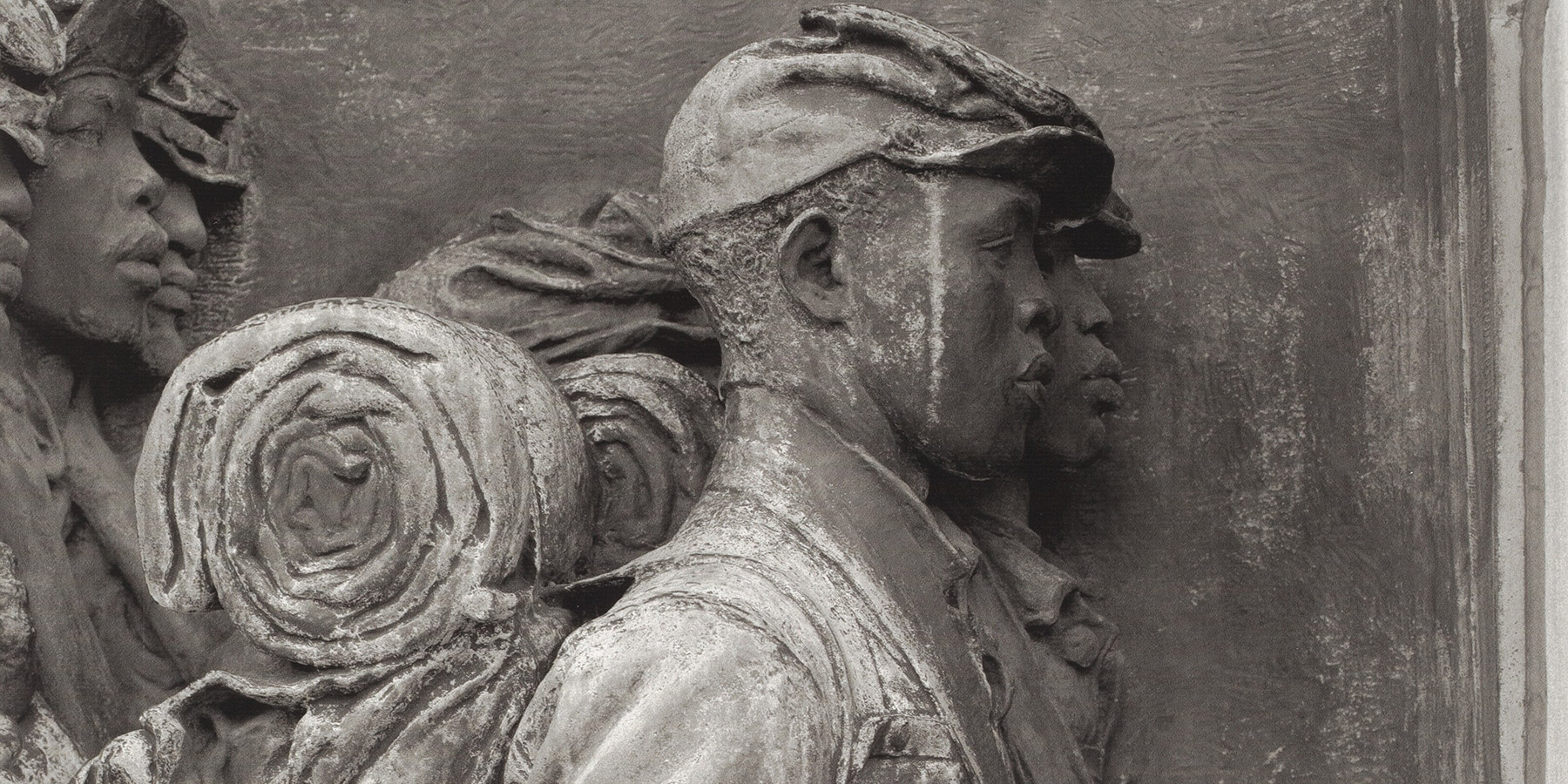 Senior Curator and Head of the Department of Photographs

As we honor veterans past and present, many will look to monuments and memorials to reflect on the sacrifices of our nation’s military. But what do these works of art really tell us about the people they commemorate? The National Gallery is home to a beloved but complicated sculpture that memorializes Colonel Robert Gould Shaw, the 54th Massachusetts Regiment—one of the first regiments of African Americans formed in the North during the Civil War—and their role in the Battle of Fort Wagner on July 18, 1863. When Augustus Saint-Gaudens created The Shaw 54th Regiment Memorial in the 1880s and ’90s, he based his depiction of Shaw on photographs of the colonel, but he hired African American models, not members of the 54th, to pose as the other soldiers. While conducting research for a 2013 exhibition, the identities, stories, and photographs of many members of the 54th came to light.

Invented in 1839, photography was still in its infancy during the Civil War, yet many soldiers had photographs made of themselves to send to family and friends or as keepsakes to memorialize their participation in the war. Some, like Sergeant Henry F. Steward, probably had their portraits made soon after they were issued their uniforms and weapons. Proud of his new profession, Sergeant Steward even paid the photographer extra to have his brass buckle, buttons, sword, and breastplate highlighted in gold and his pants and stripes tinted in Union blue.

Of all the pictures of 54th Regiment soldiers that we exhibited, the tintype of Private Alexander Howard Johnson, who played the drum, was one of the most haunting. He looks so young, vulnerable, and hesitant. Only 17 years old when he enlisted in 1863, he was, like many other drummers, younger than the regulation minimum age of 18. But the army, desperate for recruits, turned a blind eye. Although today we tend to think of drummers in their ceremonial role, leading troops in parade, in fact they served a critical function in battle. During the deafening noise and chaos, when it was often impossible to hear an officer’s commands, the drummers issued orders through different drumbeats—one sequence for advance, another for attack, and still others to signal retreat and imminent danger. They also helped carry wounded soldiers to field hospitals and aided medical personnel in amputations and other procedures.

Despite his youth, Private Johnson was probably well prepared to assume such an important and dangerous job. Born Alexander Howard in New Bedford, Massachusetts, he was, for unknown reasons, separated from his parents before the age of five and adopted by William Henry Johnson, a local, influential Black man. Before he enlisted, Alexander was a seaman, another perilous profession that required physical strength along with the ability to work well with others and quickly assess rapidly changing situations. This experience served Private Johnson well. Colonel Shaw singled him out in his letters as “the original drummer boy,” and he was with the colonel when he died in the Battle of Fort Wagner. Private Johnson went on to participate in several other battles, including Major General William Tecumseh Sherman’s infamous March to the Sea.

Unlike many of his comrades, Private Johnson survived the Civil War and returned home to New Bedford. A few years later he moved to Worcester, Massachusetts, where he married Mary Johnson in 1870. They had 17 children, but sadly only five survived into adulthood—a troubling indication of the poor healthcare afforded to African Americans. In 1907 Private Johnson was honored by a local newspaper that proclaimed him one of the best drummers in Massachusetts and noted that there was “hardly a drummer who marches the streets of Worcester who has not received instruction from him.” When Johnson died in 1930, another newspaper noted that he had been an active member of the Grand Army of the Republic, a fraternal order of Union army veterans and one of the first advocacy groups to support voting rights for Black veterans. The obituary also referenced his nickname. While African Americans had not been allowed to be officers during the Civil War, Johnson had always worn a military cap, prompting his neighbors to call him Major.

In 1904 Private Johnson, along with other members of the Grand Army of the Republic, visited the bronze version of The Shaw 54th Regiment Memorial installed across from the State House in Boston, Massachusetts. All agreed that the drummer in the memorial strongly resembled Private Johnson, even though he had never posed for Saint-Gaudens. They also recognized, as so many others have before and since, that the figure of the drummer—the first in line, the smallest in stature, and the youngest in age—was a compelling symbol of the bravery of even the most vulnerable in the fight for freedom. If not in fact, then in spirit, The Shaw 54th Regiment Memorial is a commanding monument to the heroism of Private Alexander Howard Johnson and all the soldiers of the 54th Massachusetts Volunteer Infantry.